Delta Air Lines (NYSE:DAL) shares touched a new 52-week high of $18.84 on Wednesday, up more than 3%, after the company revealed plans to return $1 billion to shareholders over the next three years. After swooning in late March and early April, Delta shares have surged more than 30% in the last month. 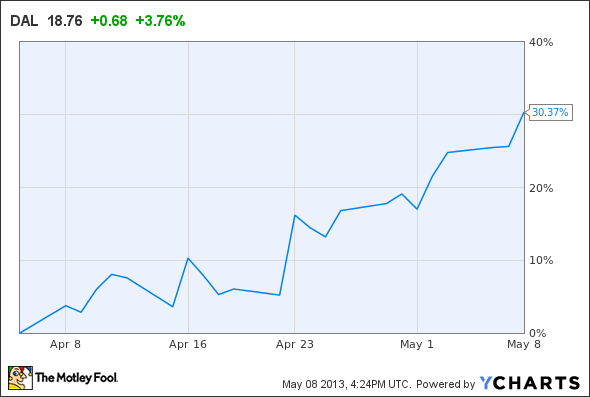 Delta's announcement was already expected; CEO Richard Anderson stated last December that Delta would reveal a strategy to return cash to shareholders by mid-2013. However, investors were justifiably pleased to see that the plans are still on track, and that the amount of cash being returned is significant. On the other hand, Delta's announcement has raised hopes that other major airlines will follow its example in the relatively near future. This seems like a very dangerous assumption.

Delta's plan
Delta announced what it described as a "balanced capital deployment" strategy on Wednesday. The company will pay a $0.06 quarterly dividend beginning in September, and also plans to buy back $500 million in stock by June 30, 2016. Meanwhile, Delta will bolster its balance sheet by reducing net debt from $12 billion to $7 billion over the next five years. Delta will also make $1 billion of discretionary contributions to its pension plan to reduce its unfunded liability.

In an investor update filed with the SEC, Delta detailed the logic behind its five-year plan. The company notes that it has produced $4 billion in free cash flow since 2009, and it expects to reliably generate free cash flow going forward.

Delta has adopted a disciplined capex plan that entails investing $2.0 billion-$2.5 billion in the business every year. This is supported by aircraft purchase commitments that average just $1 billion a year for the next five years. While this excludes the lease costs for 88 used Boeing 717 aircraft that Southwest Airlines (NYSE:LUV) is transferring to Delta between now and 2015, those lease costs will be quite modest.

Hold the applause
Delta made a very strong case for its capital allocation policy. While Delta's unit revenue results have missed expectations for the last two months, management's track record since the end of the Great Recession should reassure investors that Delta's plan is achievable.

On the other hand, investors who expect United Continental (NASDAQ:UAL) or American Airlines -- the product of an upcoming merger between US Airways (NYSE: LCC) and AMR (NASDAQOTH: AAMRQ) -- to follow suit are probably mistaken. Whereas Delta has achieved predictable positive free cash flow through disciplined capital allocation, United and the new American are poised to spend heavily on capex. This may prevent them from reliably generating free cash flow.

United and (post-merger) American are both slightly larger than Delta in terms of revenue and passenger traffic. However, they have much bigger appetites for capital spending. As I discussed last month, United has aircraft commitments totaling $15 billion over the next seven years: more than $2 billion a year on average. Meanwhile, American has commitments to spend $22.5 billion on purchasing new aircraft in the next decade.

American will also enter into $17 billion of aircraft lease commitments over the same period (and these figures don't include US Airways aircraft purchases). In other words, while United and American are only slightly larger than Delta, on average they will spend more than twice as much as Delta on aircraft each year.

Furthermore, United and American do not have a track record of consistent profitability to back up their capital spending plans. In fact, on a GAAP basis, both lost money in 2012. This shaky financial foundation means that United and American will need to significantly improve their profitability and balance sheets before they can return cash to shareholders. This process could take many years to play out.

Foolish conclusion
With Wednesday's announcement, Delta showed again how it is the only one of the legacy carriers to have put its house in order. Delta shareholders deserve to be rewarded for their patience and the company's steady execution. By contrast, United and the new American may not have learned from their past mistakes. Shareholders hoping for cash return plans at those carriers could be in for a long wait.

Are Airline Investors About to Get a Boatload of Cash? @themotleyfool #stocks $DAL $LUV $UAL $BA Next Article
Current