Please ensure Javascript is enabled for purposes of website accessibility
Log In Help Join The Motley Fool
Free Article Join Over 1 Million Premium Members And Get More In-Depth Stock Guidance and Research
By Adam Levine-Weinberg - Apr 21, 2013 at 11:00AM

Warren Buffett has long argued that airlines have all the hallmarks of a bad business. He may only be half-right.

Warren Buffett is known for having a long-held aversion to airline stocks. While he owned shares of what is now US Airways (NYSE: LCC) back in the 1990s, Buffett famously blamed this investment on "temporary insanity." Buffett has on numerous occasions stated that airlines have all the hallmarks of a terrible business: "one that grows rapidly, requires significant capital to engender the growth, and then earns little or no money."

Airline bulls have shot back that today's airline industry is "different" and have recently pointed to the industry's strong stock performance in late 2012 and the first quarter of 2013. On the other hand, bears like my colleague Brendan Byrnes have argued that nothing has really changed for the airline industry. However, the truth may be somewhere in between. The airline industry seems to be moving toward a bifurcation where some airlines are following questionable strategies from the past, while others are becoming more nimble. Airlines in the first category may run into trouble again, while those in the second category seem more likely to provide strong returns for investors.

The thesis
Buffett is spot-on when he says that investors should avoid businesses that are rapidly growing, capital intensive, and unprofitable. Historically, the airline industry has fit into this category. However, that is not true of every single airline. Southwest Airlines has been the most successful U.S. airline for the past several decades, and its shares are now worth more than 22 times their value 30 years ago (an 11% compound annual growth rate). 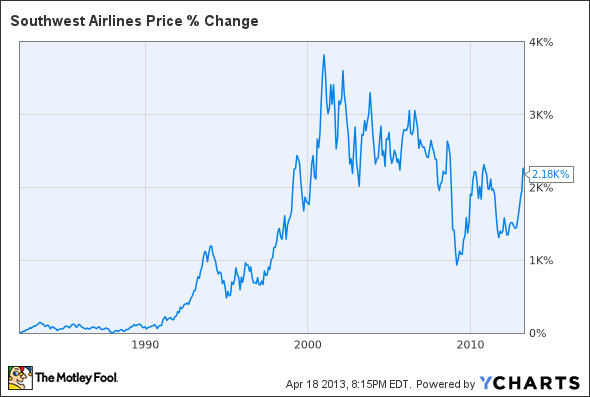 Most airlines are profitable today; even bankrupt American Airlines (NASDAQOTH: AAMRQ) recently announced that it earned a profit (excluding one-time items) in the seasonally weak Q1. However, because the industry is cyclical, profitability today does not guarantee that these companies will remain profitable over a long period of time. For the most part, airlines are not growing rapidly, either. In fact, many are shrinking.

The key to Buffett's bearish thesis about airlines is in his second point: that the industry requires substantial capital expenditures. This saddles airlines with lots of debt, which becomes an unsustainable burden if an industry downturn hits profitability. Let's look at how this plays out in practice today.

"Traditional" airlines
United Continental (UAL 1.45%) definitely fits Buffett's description of a bad business. In 2012, the company lost money; even if you exclude merger and integration expenses, United posted a meager pre-tax profit margin of 1.5%. Moreover, the company is in the midst of a capital expenditures binge. United's management may be right that they are making necessary investments in the business. However, the extent of these investments should give investors pause. As I wrote last month, United has more than $15 billion in CapEx commitments over the next seven years, and is likely to spend nearly $20 billion in total CapEx during that time period (an average of nearly $3 billion/year). By contrast, operating cash flow -- money that could be used to pay for capex -- was only $2.4 billion in 2011, the best year United has had since its merger with Continental.

The "new American Airlines," which will be formed by the upcoming American-US Airways merger, appears to be on a similar path. The companies expect to be very profitable if they can achieve significant "revenue synergies" following their merger but have no track record at this point. Moreover, they are in the midst of a heavy capex cycle. American alone has commitments to purchase 326 aircraft for a total of $22.5 billion over the next 10 years. It has also committed to lease an additional 205 aircraft for total rent of approximately $17 billion over the lease terms.

For United and American, Buffett's airline mantra may be quite accurate. Both companies are plowing billions of dollars a year into expensive new aircraft, and the resulting debt burden could limit their flexibility going forward. In an industry downturn, these two companies seem like the ones most likely to run into trouble.

The "reformed" airlines
However, not every airline follows the failed policies that have justified Buffett's negative opinion of the sector. Delta Air Lines (DAL 1.02%) and Allegiant Travel (ALGT 1.75%) have both distinguished themselves in recent years through their use of used aircraft to reduce capital expenditures.

Allegiant exclusively flies used planes that it can buy or rent cheaply after other airlines have upgraded to newer models. Allegiant has used this strategy to grow rapidly over the past decade, while remaining consistently profitable. Furthermore, the company has more cash than debt. Clearly, this is an airline that doesn't act the way Buffett expects! Allegiant's "capital-light" strategy makes it more flexible and more profitable than most rivals.

Delta hasn't gone to the same extremes as Allegiant, but it still takes advantage of cheaper used planes quite frequently. It's been buying up used MD-90s for years and recently leased 88 used Boeing 717s from Southwest. Furthermore, the company keeps its planes flying longer than competitors; Delta still flies some DC-9s that are nearly 35 years old on average. This strategy has helped Delta deliver higher profit than its peers recently, while limiting its debt load.

Foolish bottom line
Warren Buffett is half right about airlines. Airlines with low profitability that go on capital spending binges -- such as United and American -- should probably be avoided. On the other hand, more profitable airlines that have disciplined capital spending -- such as Allegiant and Delta -- may be able to deliver long-term profits for investors. These are the companies that may be of interest to long-term investors.