We already know that Samsung has a certain level of admiration for Apple (NASDAQ:AAPL). The South Korean conglomerate has taken everything it's learned as an Apple supplier and redeployed that knowledge in its own Galaxy lineup to much success. There are numerous examples of Samsung carbon copies, and sometimes it copies Apple's mistakes.

Well, there's a new way that Samsung is being like Apple, and it's in a way that's been a great problem for the Mac maker: Samsung now has too much cash.

The best problem to have

Like Apple, much of this increase is related to smartphone sales; the two companies remain the top two vendors in the world. At the end of the first quarter, Samsung was sitting on $40.1 billion in cash and investments, up from $23.4 billion a year ago. 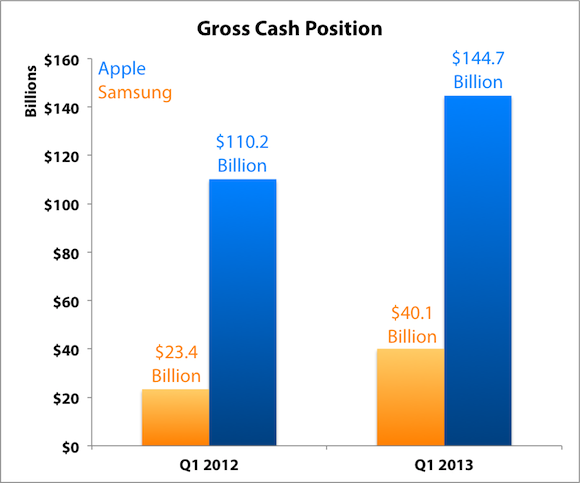 Samsung currently has $11.4 billion in debt on the books, which brings its net cash position down to $28.7 billion. The company has paid down some debt over the past year, but its gross cash position has grown significantly. In fact, Samsung's net cash was just $10.6 billion a year ago, meaning it's nearly tripled that figure.

Apple only recently took on debt, so its net cash position is unchanged.

Since Samsung is one of the most vertically integrated conglomerates in the world, it has much higher capital needs than Apple to build up infrastructure. Even still, the company may be left with a surplus and Samsung investors are bound to start asking for some of that money back in much the way that Apple's investors had been doing until recently. Apple's $100 billion capital return program seems to have satiated its investors for now.

Of all the ways that Samsung copies Apple, this is one of the better ways.