Just over two weeks ago, Apple (NASDAQ:AAPL) was trading near its 52-week low right around $385. Today, shares are trading in the ballpark of $460 as the Mac maker has enjoyed a healthy rally of $75 since then, representing a gain of 20% since the low set on April 19.

That's quite a jump for the largest tech company on Earth. What are all the reasons for investor optimism?

The first thing to remember is that shares were knocked down to those lows in part by audio codec supplier Cirrus Logic (NASDAQ:CRUS). The company's preliminary figures rattled investors since Cirrus noted a "decreased forecast for a high volume product" that had Apple shareholders thinking the worst. While some caution regarding Apple was warranted, the magnitude of the sell-off was not.

Cirrus would go on to plunge again after its full release, even though it already pre-announced.

Changing the game
The announcement also came just days before Apple would report its own earnings results. The operating figures weren't necessarily anything to call home about, even if iPhone units came in better than expected. The real reason why I argued that Apple just changed everything was that the company significantly expanded its capital return program and announced it would take the unprecedented move (for Apple) of tapping the debt markets to fund said program. CFO Peter Oppenheimer said Apple would begin repurchasing shares immediately.

The day after earnings, shares were largely flat (down less than $1). That's a stark contrast to the plunge that shares saw after January earnings. The most apparent explanation for this ambivalence was that investors were still trying to digest the new information, and were effectively underappreciating the extent of the capital structure changes Apple had just outlined.

The very next week, Apple would conduct a $17 billion bond offering, the largest for any non-financial company. The offering consisted of six tranches between three-year and 30-year maturities, which all averaged out to a 1.85% interest rate. This average will change, as two of the tranches have floating rates based on LIBOR that will reset quarterly, covering 18% of the total principal offered.

Apple could easily be looking at hundreds of millions of dollars in savings just from retiring dividend payments, before even considering how much it's saving in taxes by leaving its $102.3 billion foreign stash untouched. All the while, Apple's repurchasing activity could also be supporting shares. Volume has been strong amid the rally, which suggests that it may have some legs as investors jump in, reassured that Apple has their back. 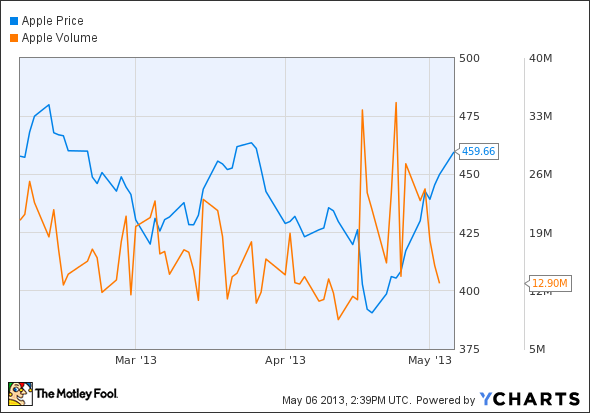 Taking on debt will yield some very important benefits to Apple shareholders. The company finally addressed its widely criticized capital allocation program, while the move will reduce Apple's overall cost of capital. It can now get back to focusing on its product pipeline.

With the $75 rally over the past two weeks, perhaps Apple investors are now starting to appreciate the new capital structure.