Investors are now accustomed to analyst revisions on Apple's figures. The real culprits behind today's brutal sell-off were two storylines within Apple's supply chain -- one of which carries more weight than the other.

It hasn't been this bad for months. Apple (AAPL -0.34%) shares have been utterly crushed today, dramatically underperforming the broader market that's also selling off in part on soft earnings.

While there was a typical chorus of downward revisions among Street analysts, investors should be used to that by now, and those modeling tweaks aren't likely the primary cause of shares getting taken out to the woodshed.

Goldman Sachs warned investors not to expect any dividend announcements until after next week's earnings release, echoing other analysts in recent memory. The firm also expects Apple's figures to come in slightly below consensus, and expects "near-term momentum" to "further weaken" ahead of new product launches expected on the horizon. Goldman's still bullish overall, with a "buy" rating and $575 price target.

Lazard Capital made similar comments, saying this quarter and the next could represent a "trough" ahead of product refreshes. Lazard thinks the dip represents a buying opportunity, in line with its rating and $540 price target.

Downward revisions and overall bullishness aside, there are primarily two reasons why Apple is seeing its worst sell-off in nearly three months -- the worst daily performance since its 12% post-earnings sell-off. 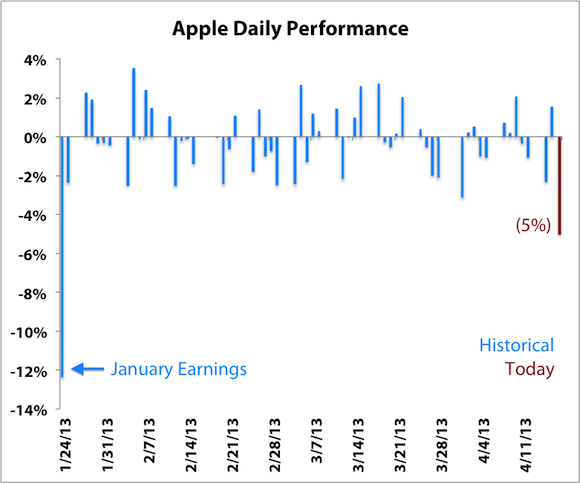 Last night, Cirrus Logic (CRUS -1.40%) released gloomy preliminary results with revenue last quarter expected to come in just under $207 million. More specifically, the audio chip specialist said it would record a $23.3 million inventory reserve charge. Of that total, $20.7 million is related to a "decreased forecast for a high volume product as the customer migrates to one of Cirrus Logic's newer components." That charge will crush gross margin this quarter by over 10%, and Cirrus expects gross margin to be 40.4%, well below its prior guidance of 50% to 52%.

An inventory reserve is a preliminary accounting step that precedes a writedown, so Cirrus is planning to eat some of its inventory. Until Cirrus works out the specific figures, the $23.3 million reserve is a conservative (i.e., higher) estimate of how much it might need to write down. Like most companies, Cirrus uses first-in, first-out accounting for its inventory.

Of course, Apple is Cirrus Logic's biggest customer by far and undoubtedly one of its iDevices is the "high volume product" that Cirrus is referring to.

The other reason for some pessimism today is a report from the always-dubious DIGITIMES, citing "upstream sources" that expect iPad Mini unit shipments to fall by 20% to 30% in the second quarter "due to lacking demand in the market." The publication ties this weak demand to consumer anticipation of the next model, leading to some purchasing delays.

iPad display supplier LG Display (LPL -1.57%) is expected to see total iPad panel shipments (including full-sized and Mini) fall sequentially from 5 million units last month to 3.5 million units in April. LG Display's volume may continue falling through the next two months. Investors have mostly wised up to speculative supply chain rumblings, but when combined with legitimately negative news from a major component supplier, those rumors carry a little more weight.