I'm not quite as fanatical as Warren, but I do enjoy digging into a company's annual report (called a 10-K) to learn something new. Especially for companies I own.

Over the next few weeks, I'll be reading the 10-Ks of all the companies I own shares in, first page to the last. This week: Johnson & Johnson (NYSE:JNJ).

Here are five things I learned from J&J's annual report (which you can read here).

1. A lot of the company's slowing revenue growth doesn't have to do with sales, but currency
Johnson & Johnson's sales growth is tepid at best. Revenue growth has averaged 2.3% per year over the last five years, or about equal to the U.S. inflation rate.

But take a look at this table:

Johnson & Johnson's ability to sell stuff actually grew nicely in 2012. And it managed to do so with slightly higher prices.

What took down revenue growth were currency fluctuations.

Consider how big currency issues were in Europe alone (emphasis mine): "Sales in Europe experienced a decline of 1.1% as compared to the prior year, including operational growth of 5.8% offset by a negative currency impact of 6.9%."

The irony here is that many investors admired companies like Johnson & Johnson for their exposure to international sales, which was seen as a hedge against a weakening dollar. But now that the dollar is gaining value against a basket of global currencies, international exposure becomes a drag, net of currency hedges. Be careful what you wish for.

2. Forget about runaway inflation of medical costs
Everyone knows health care prices ballooned over the last decade. Companies operating in the health care universe, therefore, were said to benefit from the other side of that trend with above-average pricing power and revenue growth.

But that hasn't been the case for J&J's health care units. Take this paragraph (emphasis mine):

The Company is aware that its products are used in an environment where, for more than a decade, policymakers, consumers and businesses have expressed concerns about the rising cost of health care. In response to these concerns, the Company has a long-standing policy of pricing products responsibly. For the period 2002 - 2012, in the United States, the weighted average compound annual growth rate of the Company's net price increases for health care products (prescription and over-the-counter drugs, hospital and professional products) was below the U.S. Consumer Price Index (CPI).

3. Don't wait around for foreign profits to come home
When a company earns profits overseas, the act of bringing that cash back to the United States to pay dividends or fund share buybacks can create a big tax bill. Called the "repatriation tax," companies typically owe the difference between the tax rate they paid on earnings overseas and the U.S.'s 35% tax rate.

Many companies opt to hoard cash overseas, anticipating a repatriation-tax holiday in the future that will let them bring cash home without spiking their tax liabilities.

At December 30, 2012 and January 1, 2012, the cumulative amounts of undistributed international earnings were approximately $49.0 billion and $41.6 billion, respectively. At December 30, 2012 and January 1, 2012, the Company's foreign subsidiaries held balances of cash and cash equivalents in the amounts of $14.8 billion and $24.5 billion, respectively. The Company has not provided deferred taxes on the undistributed earnings from certain international subsidiaries where the earnings are considered to be permanently reinvested. The Company intends to continue to reinvest these earnings in international operations.

4. Dividend payouts are rising fast
J&J's earnings-per-share growth has been dim. In the 12 months ended March, the company earned less profit per share than it did five years ago (although normalized EPS have grown). At the same time, "the Company increased its dividend in 2012 for the 50th consecutive year" in 2012. The result has been a substantial rise in the dividend payout ratio: 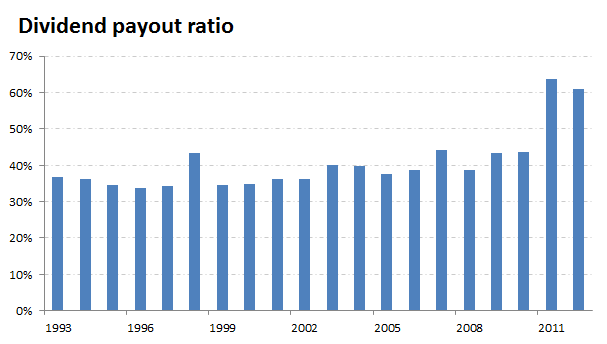 I like dividends. But if J&J had a long-standing policy of paying out 35%-40% of its earnings as dividends, I don't see why that should change, save for a dramatic decline in investment opportunities. Something will likely give in the coming years -- ideally earnings growing faster than payouts.

5. There's only one way to run a company this large: decentralization of subsidiaries
A large portion of big, multi-national corporations that operate in a variety of businesses crumble under their own weight. There comes a point where the only way to grow the company is to venture into businesses the CEO isn't skilled in. Empire-building takes over, returns fall, and the company finally breaks itself up. Same story over and over again for conglomerates.

J&J is different for one important reason: It emphasizes decentralization of operations:

The Company's structure is based on the principle of decentralized management. The Executive Committee of Johnson & Johnson is the principal management group responsible for the strategic operations and allocation of the resources of the Company. This Committee oversees and coordinates the activities of the Consumer, Pharmaceutical and Medical Devices and Diagnostics business segments. In line with the principle of decentralized management, senior management groups at U.S. and international operating companies are each responsible for their own strategic plans, as well as the day-to-day operations of those companies, and each subsidiary within the business segments is, with some exceptions, managed by citizens of the country where it is located.