Please ensure Javascript is enabled for purposes of website accessibility
Log In Help Join The Motley Fool
Free Article Join Over 1 Million Premium Members And Get More In-Depth Stock Guidance and Research
By Evan Niu, CFA – May 14, 2013 at 6:00PM

The e-tail giant continues to put more and more heat on the Mac maker on a wide range of fronts. Can Apple defend itself?

Amazon.com (AMZN 4.50%) and Apple (AAPL 2.56%) are increasingly at odds these days. Once upon a time, one was merely an e-tailer and the other just a Mac maker. These days, the two are butting heads on more fronts. Amazon is now going all out on its assault on Apple.

Software and services are increasingly important in the age of ecosystem warfare. Amazon and Apple now compete directly on the mobile hardware front, but that battle inevitably spills into the cloud. To that end, Amazon has made several recent moves that target Apple directly.

Earlier this month, Amazon launched Cloud Drive Photos on iOS, which will sync from an iDevice's camera roll and allow users to easily upload snapshots to their Amazon Cloud Drive. That's a direct shot at iCloud and Photo Stream, Apple's own cloud photo syncing and sharing service. Other tech players are also bolstering up cloud photo services. Microsoft just upgraded SkyDrive to bolster its shutterbug capabilities, and Microsoft also has a SkyDrive app for iOS.

Amazon also just launched a desktop client for its Cloud Player music streaming and storage service, which is another head-on challenge to iTunes. The desktop client will initially only support Windows platforms, but Amazon said a Mac version is on its way. Even though Amazon originally launched its MP3 store in 2007, this is the first time that it has released a stand-alone desktop client to actually play those tunes.

Amazon also released a Cloud Drive Player app for iOS last year, allowing Apple users to tap into their Amazon tunes. Earlier this year, Amazon rolled out a mobile version of its MP3 store specifically tailored and optimized for iOS devices. Since it's accessible through a mobile web browser, Amazon can bypass Apple's oversight, approval process, and 30% cut. These are all facets of Amazon's musical siege on Cupertino. 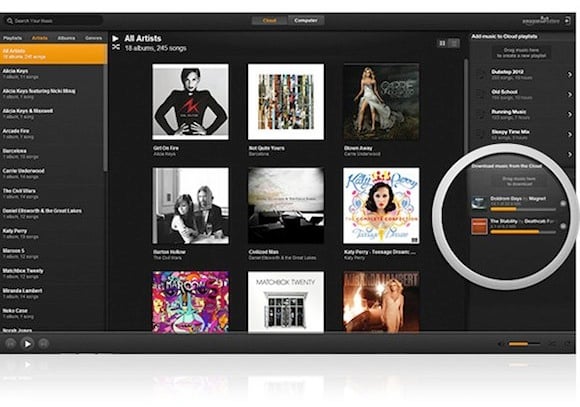 Together, Amazon and Apple have long dominated the digital music sales industry. Apple still leads the way a decade after iTunes was launched. NPD estimates Apple's market share at 63%, while Amazon's slice is 22%. That's despite the fact that Amazon typically has lower prices.

There are other areas where Amazon may be looking to challenge Apple further. The company is likely building a mapping service (after acquiring UpNext), a virtual assistant (after acquiring Yap), a streaming set-top box, and a smartphone. Can Apple defend against a full-blown assault?