Please ensure Javascript is enabled for purposes of website accessibility
Free Article Join Over 1 Million Premium Members And Get More In-Depth Stock Guidance and Research
By Tim Beyers - May 15, 2013 at 9:35PM

So far, the week's big news from Google's ( GOOGL -2.08% ) annual developer conference, Google I/O, is coming from elsewhere. Both BlackBerry ( BB -4.08% ) and Microsoft ( MSFT -1.64% ) are granting access to more of the search king's services in their own products.

At BlackBerry's annual user conference, CEO Thorsten Heins said BlackBerry Messenger, which was recently enhanced to allow for free Wi-Fi calls, will no longer be proprietary to the company's own handsets. Android and iOS versions will arrive sometime this summer.

"We are confident that the time is right for BlackBerry Messenger to become an independent, multiplatform service," Heins told the audience gathered for its annual user conference.

Whether having a more open BBM service means anything for BlackBerry's profit picture is a question that remains unanswerable for the time being.

Meanwhile, Microsoft has added support for the chat app Google Talk to Outlook.com. Users connect their Google account to Outlook and then start text chatting in a sidebar: 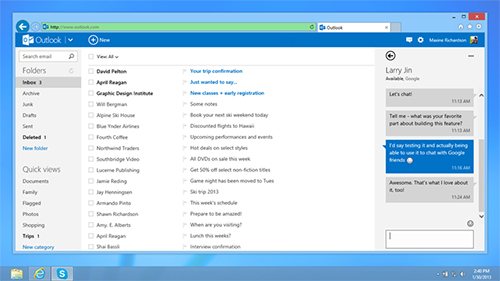 Support for audio and video chat could come later if users demand it, Microsoft senior director Dharmesh Mehta said in an interview with The Verge.

For his part, Google co-founder and CEO Larry Page called Mr. Softy's move "sad" because in a Q&A at I/O, he noted how Microsoft has choked off access to its own products for enhancing Google services.

"This is really sad, and not the way to make progress," CNET News.com reports Page as saying. "You can't have people milking off of just one company for their own benefit."

Microsoft obviously disagrees. Either way, Google doesn't have much to complain about. A broad shift to cloud computing has even its sworn enemies embracing its services. In a week that's sure to be filled with "big news," that's the biggest news of all.

Do you agree? Disagree? Let us know which of these three stocks you'd buy now and why, using the comments box below.