So far this week, Apple (NASDAQ:AAPL) has been under pressure and lagged the broader market. One contributing factor to the weakness has been David Trainer of New Constructs, who has made headlines over the past couple of days by proclaiming that Apple is worth just $240. That's over $200 less than what shares closed at yesterday, implying an additional 45% downside.

Could such a price be possible?

The one and only

Trainer's bearish thesis hinges upon a single metric: return on invested capital, or ROIC. Apple has historically enjoyed an incredibly high ROIC that has declined recently and Trainer thinks that trend is here to stay, citing the loss of Steve Jobs and assumption that the company has no revolutionary products up its sleeve.

He compares Apple's ROIC to industry peers and arrives at different price targets based on different levels of ROIC. At a 75% ROIC, which is slightly above Microsoft (NASDAQ:MSFT), Apple is worth just $295, in Trainer's view. He expects Apple's ROIC to decline to 50% eventually, which pegs the company at $240. According to his estimates, Apple's current price implies a 124% ROIC, which Trainer considers unsustainable.

Trainer was interviewed on Money Life and CNBC discussing his model, and also posted a detailed breakdown (link opens PDF) on his blog.

Party like it's 2009
Apple now has over $154 per share in net cash just sitting on the books, which implies that Trainer values the rest of the business at just $86. His estimates would put Apple's market cap at $225 billion, and its enterprise value at just $80 billion. In comparison, Microsoft's current market cap is $281 billion, and the software giant has an enterprise value of $220 billion.

However, any valuation of any stock that relies entirely on one single metric is inherently flawed and incomplete. Investors should utilize a wide range of quantitative metrics -- combined with qualitative assessments of the fundamental business -- to formulate an overall view.

Digging deeper into Trainer's model (linked above), he's effectively assuming that Apple's net operating profit after tax, or NOPAT, will suddenly plunge to fiscal 2009 levels of around $8 billion, which is what would happen if you abruptly slash its ROIC to 52%. For comparison, I estimate Apple's NOPAT last quarter alone at $9.3 billion, with $38.7 billion over the past 12 months. This is how his estimate compares to Apple's actual figures. 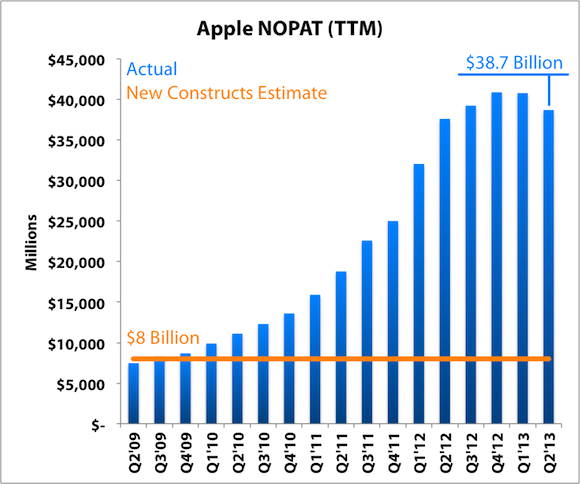 Trainer broadly proclaims that Apple is "destined to be just another consumer electronics company," which somehow implies that Apple's business will implode overnight. His estimates effectively ignore the iPad altogether, which was released after 2009 and remains young. Trainer also assumes that Apple will become free cash flow negative to the tune of $3.6 billion, compared to the $44 billion in positive free cash flow that Apple's generated over the past four quarters.

To be fair, if Apple's fundamentals did self-destruct at the tweaking of a spreadsheet cell, then a $240 price target could be warranted. In reality, companies don't tend to see operating profits plunge by 80% at the drop of a hat, and investors would gradually observe any potential deterioration as it occurs over many quarters.

By the same rationale, I can apply some tweaks of my own, except I'll play bull to Trainer's bear. By my estimates, if Apple were to sell a bazillion iPhones tomorrow, it would be worth a millionty dollars per share today.

The good news is that Apple's business doesn't rely on Trainer's spreadsheet.

Could Apple Possibly Be Worth Just $240? @themotleyfool #stocks $AAPL $MSFT Next Article
Current