After launching Windows Phone, Microsoft (NASDAQ:MSFT) has been very vocal about its ambitions of becoming the No. 3 operating system platform behind Apple (NASDAQ:AAPL) and Google (NASDAQ:GOOGL). The iOS and Android duopoly strengthened further in the first quarter, gobbling up 92.3% of smartphone market share, according to the most recent estimates out of IDC.

That stated goal would inevitably entail overtaking BlackBerry (NYSE:BB). The Canadian company's market share has been sliding for years at the hands of iOS and Android, making Microsoft's job a little easier. Well, the software giant has done exactly what it set out to do. 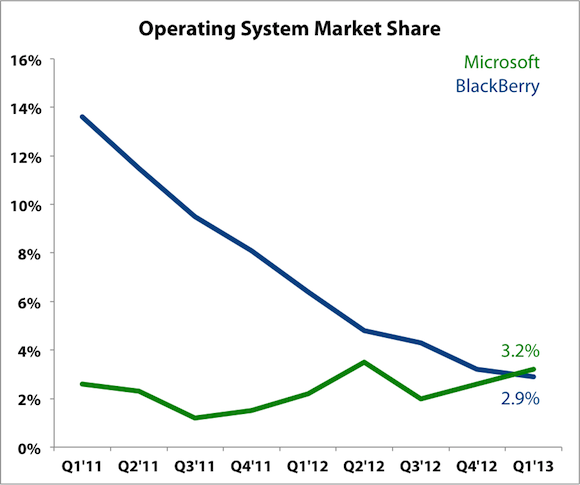 Microsoft has overtaken BlackBerry by a hair, with its 3.2% market share sliding ahead of BlackBerry's 2.9%. That's a testament to Nokia (NYSE:NOK) gaining traction with its Lumia lineup, even though increasing Lumia shipments haven't been enough to impress investors.

Nokia shipped 5.6 million Lumias in the first quarter, which represents a whopping 80% of the total 7 million Windows Phones that were shipped. The remaining 1.4 million is split between other OEMs HTC and Samsung. Huawei recently unveiled a Windows Phone 8 targeting prepaid consumers, but that was after the first quarter. All three of those manufacturers have a heavy focus on Android, so they have less to gain from Windows Phone's rise. Google's Android is very much the reason why Samsung is the top vendor in the world.

It's not surprising that Symbian posted the biggest decline of all platforms, down 89% from a year ago. Nokia has effectively abandoned the platform, but the silver lining is that Lumia sales are strong.

The figures also underscore the ceiling that Apple is running into. Its 7% growth severely underperformed the 42% growth in total smartphone shipments. This isn't news, as IDC released its vendor estimates in April that conveyed the same comparison. The platform estimates are just a gloomy reminder.

BlackBerry continues to mounts it turnaround on the backs of its Z10, Q10, and freshly unveiled Q5. With Microsoft only leading by a hair, it wouldn't take much for BlackBerry to reclaim its No. 3 title.