Please ensure Javascript is enabled for purposes of website accessibility
Log In Help Join The Motley Fool
Free Article Join Over 1 Million Premium Members And Get More In-Depth Stock Guidance and Research
By Brian Stoffel – May 16, 2013 at 4:10PM

When Supersize Me -- a documentary about the health problems one man got from eating nothing but McDonald's (MCD 0.10%) fast food -- came out in 2004, McDonald's almost immediately stopped using the term. People no longer wanted to "supersize" their meals.

Not surprisingly, there was a sharp increase in the company's healthy eating index corresponding to about the same time. Sadly, according to a study by the American Journal of Preventive Medicine, McDonald's and its cohorts still haven't done a good enough job of improving the quality of what is being served to customers.

The researchers used a scale from 0 (least healthy) to 100 (most healthy) to rate the food. The scale included variables accounting for fruit, vegetable, and whole-grain servings, as well as levels of oils, saturated fats, sodium, and sugar. On average, the fast-food chains yielded a score of 45. For comparison's sake, the average score for all food available to Americans is 60.

Fourteen years later, use of the words "healthy" and "low-fat" have increased 86% and 33%, respectively. And yet, the average score among fast-food chains over a decade-and-a-half is only up to 49. 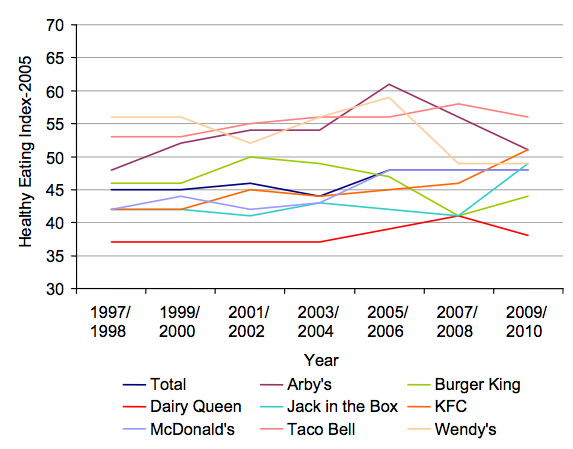 Researchers did point out some positive steps, like the fact that McDonald's recently replaced french fries in its Happy Meal with apple slices. On the whole, however, the actual improvements aren't matching the rhetoric coming from fast-food companies.

What's it mean for Fools?
It's difficult to say what types of implications this could have for investors. While the organic and healthy food movement is strong in the United States and shows no signs of slowing down, fast food still accounts for roughly 15% of all food eaten by Americans, and is becoming more and more popular in developing nations. At the end of the day, it would be wise for investors to make sure the companies they own in this industry are making progress in this area, such as McDonald's, Burger King (BKW.DL), and Jack in the Box (JACK 3.95%).