The "Dogs of the Dow" strategy is one of the simplest for beating the market. Over the coming year, I'll track the Dogs' performance and keep you abreast of news affecting these companies.

The Dogs strategy involves buying and holding equal dollar amounts of the 10 best-yielding dividend stocks of the Dow Jones Industrial Average (DJINDICES:^DJI). The strategy banks on the idea that blue-chip stocks with high yields are near the bottom of their business cycle and should do much better going forward. Investors in the strategy then would get not only large dividends but also gains in the stocks underlying those dividends.

High-yield dividends
High-yield portfolios are often dismissed as inferior to their growth counterparts for various reasons:

Evidence from Tweedy, Browne refutes these falsehoods. Research shows that portfolios of high-yield dividend stocks outperform lower-yielding portfolios and the market in general. In fact, a study by noted finance professor Jeremy Siegel found that over 45 years, the highest-yielding 20% of S&P 500 stocks outperformed the S&P 500 by three times! The highest-yielding stocks turned a $1,000 investment in 1957 into $462,750 by 2002, compared with $130,768 if the same money was invested in the index.

Check out the Dogs' performance in 2013 so far:

There were a bunch of economic reports and some other extraneous factors boosting the Dow this week. The Dow's momentum continues to carry it up and was boosted this week by better-than-expected retail sales on Monday. Later in the week, inflation reports for both consumers and producers were below the Federal Reserve's target of 2%, which bodes well for the government's continuing of its bond buying. 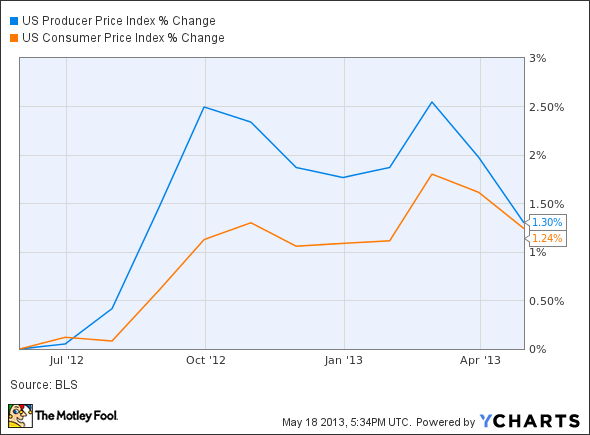 Then on Thursday, the Department of Commerce reported that building permits rose to 1.02 million in May, their highest level in nearly five years, which bodes well for the housing market. The final positive factor was on Friday, as consumer sentiment rose far above expectations to a six-year high.

Movers and shakers
The biggest mover this past week among the Dogs of the Dow was Johnson & Johnson, which rose 2.72%. On Monday, the FDA gave priority review status to the company's hepatitis-C drug, simeprevir. That's a good sign, as it puts Johnson & Johnson's drug in the lead to be first to market, ahead of Gilead Sciences' competing drug sofosbuvir. If you don't have time to read the company's annual report, Fool analyst Morgan Housel recently went through it and pointed out five things he learned from reading the annual report.

The biggest loser among the Dogs was Intel, which fell 1.88%. On Tuesday, research firm IDC said it expects global IT spending to slow in 2013 to 4.9% growth, down from last year's 5.6%. While Intel is up 16.5% so far this year, over the past 12 months the stock is down 13%. Fool analyst Chris Neiger recently laid out three must-watch areas for Intel investors, which you can read about here.