Offshore drilling services provider Ensco (NYSE:VAL) will be buying back $2 billion more shares of its stock under a plan adopted by its shareholders at today's annual meeting.

The authorization replaces the company's previous repurchase agreement that expired when Ensco's American depository shares were converted to Class A ordinary shares. Based upon its closing price on May 17, Ensco could afford to buy back around 32 million shares of the nearly 233 million shares outstanding.

Ensco shareholders approved several other proposals at the meeting, including the elimination of staggered terms for the board of directors, which will have all directors now serve for a single year. Two new directors were voted onto the board as well: Roxanne J. Decyk and Mary Francis. They replace retiring board members.

Ensco is an English company based in London, and operates "the world's newest ultra-deepwater fleet and largest fleet of active premium jackups." Ensco has a major presence in strategic offshore basins across six continents. 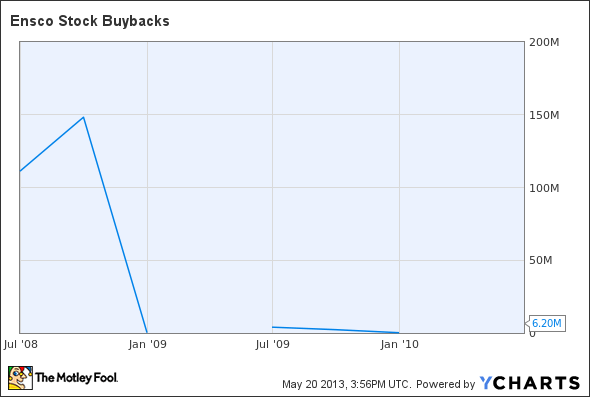