Even as several European markets are making new highs today, U.S. stocks opened flat this morning, with the S&P 500 (SNPINDEX:^GSPC) at breakeven and the narrower, price-weighted Dow Jones Industrial Average (DJINDICES:^DJI) down 0.1% as of 10:05 a.m. EDT.

Facebook: 12 months in three graphs
Saturday marked the first anniversary of Facebook's (NASDAQ:FB) initial public offering. Here are three charts that tell the story of the company's first 12 months as a public company: 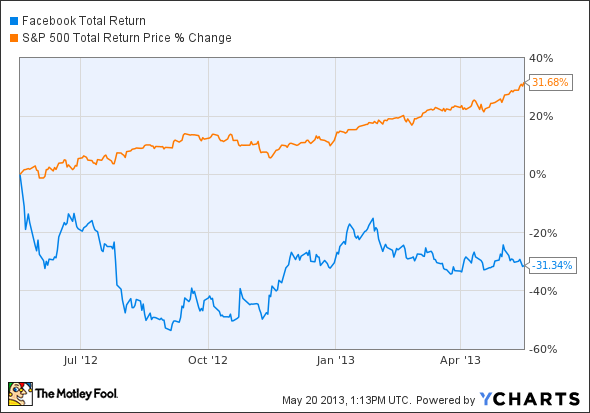 On an absolute basis and relative to its large-cap peers, Facebook has performed disastrously, losing nearly a third of its value; during the same period, the S&P 500 has returned more than 30% (including dividends). That result isn't surprising if we consider the absurdly inflated valuation at which the company came public: The shares were offered at $38 a piece and closed their first day of trading at $38.23, or 70.1 times the then next 12 months' earnings-per-share estimate. The stock hasn't achieved that price or that multiple since then. I'm not saying this purely with the benefit of hindsight, either -- it was pretty obvious from the outset.

But perhaps you think the S&P 500 is not an appropriate benchmark for a rule-breaking business like Facebook. In that case, here's how the stock has fared against some of its social-networking peers: 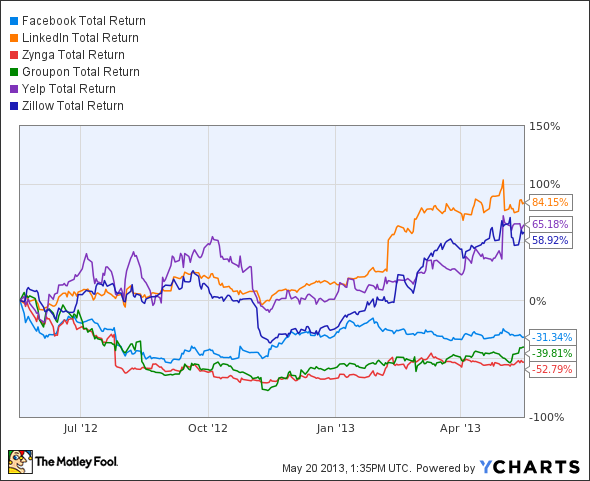 This chart shows a mixed verdict. Several stocks (LinkedIn, Zillow, and Yelp) have massively outperformed Facebook (and the broad market), which nonetheless managed to beat Groupon and Zynga. It's no coincidence that the latter two were at the top of the hype-meter when they floated; furthermore, their horrendous post-IPO returns, along with those of Facebook, hint at a burst bubble in social-networking shares.

Finally, here's a graph that compares Facebook's performance with that of Google (NASDAQ:GOOGL), arguably its greatest competitor. Remember that unless Facebook stumbles across a new business model, both companies are competing for online advertising dollars. 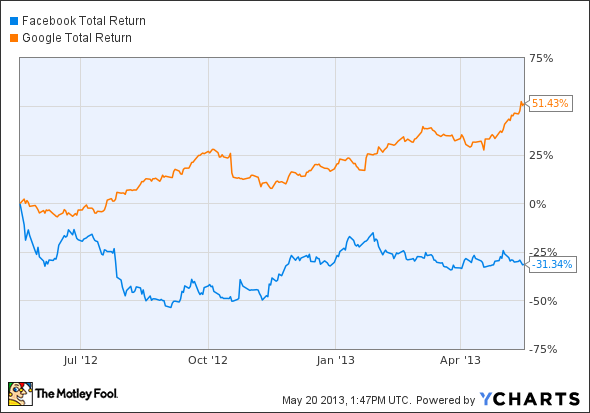 The difference between the two? Apart from the difference in valuations a year ago, Facebook remains a speculation: It's not clear what the business will look like in 10 years' time. Google, on the other hand, is a legitimate investment with a genuine competitive advantage. Or, as Berkshire Hathaway vice chairman Charlie Munger put it back in 2009:

Google has a huge new moat. In fact I've probably never seen such a wide moat. I don't know how to take it away from them. Their moat is filled with sharks.

That's high praise, coming from one of the smartest investment thinkers out there.