Just last month, the company not only settled a trade secrets lawsuit on its own terms with competitor Blue Belt Technologies, but also resolved a patent infringement complaint it brought against U.K.-based Stanmore Implants for uncanny similarities between its own RIO System and Stanmore's Sculptor RGA.

Curiously enough, the resolution of the latter complaint ended with MAKO acquiring Stanmore's robotics technology for less than $1 million. Meanwhile, Stanmore agreed to withdraw itself from the surgical robotics market completely.

Then again, these cases were offensive moves by MAKO designed to make sure their competition would play fair. Even so, I'm sure most shareholders would agree that it would be a lot less stressful if the company hadn't needed to get involved in these legal matters in the first place.

As I noted earlier this month, however, management was also facing a courtroom challenge from other shareholders who alleged they were misled by last year's over-inflated RIO System sales projections. Of course, anyone who kept track of MAKO in 2012 remembers what happened after they missed their own lofty expectations: 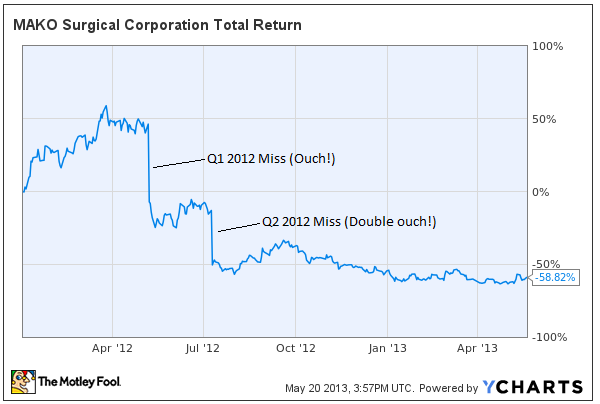 "Forward-looking statements"
Last week, however, according to a report from the South Florida Business Journal, the courts reminded shareholders the importance of owning their investing decisions.

More specifically, a Southern Florida District Court judge dismissed one of the aforementioned class action lawsuits after pointing out MAKO's "2012 sales projections were accompanied by meaningful language that cautioned investors that these 'forward-looking statements' may not be on target."

The warnings in the defendants' press releases and the referenced SEC filings warned investors of precisely what happened here: that projected system sales and procedures might be lower than projected due to the economic downturn, variable sales and a reluctance on the part of orthopedic surgeons to adopt the new technology.

What's more, the judge also ruled that comments made by management during investor conference calls were also protected as "forward-looking statements," and there exists no evidence at the time they were aware they wouldn't be able to meet their goals.

Foolish final thoughts
Of course, management's seeming ignorance was one of the very reasons fellow Fool Brian Stoffel told us last December that MAKO wouldn't remain in his 2013 portfolio, but I personally remain encouraged that the company seems to have finally adjusted investors' expectations with reality -- especially on the heels of two consecutive decent quarters.

However, regardless of how effective any given company is at selling you on its prospects, remember these businesses are run by imperfect people who may not always be able to deliver on their promises. In the end, then, don't take those monotonous Safe Harbor Statements as a time to zone out until the real conversation begins. Instead use them as a reminder that your investing decisions -- both good and bad -- are your own responsibility.