The Department of Energy on Friday approved a second LNG export terminal for exports to non-free trade agreement counties, the Freeport LNG terminal operated by ConocoPhillips (NYSE:COP) and Michael Smith. This is the first terminal approved in two years and, hopefully, for those on the waiting list, this is the start of a trend with others being approved shortly. Export approvals are promising for natural gas producers in the medium term in that they should help put a floor under natural gas prices and demand, thus sparking drilling activity in the sector.

If you aren't familiar with what's been going on in the natural gas world, check out this article "The U.S. Natural Gas Story in 15 Charts."

The Department of Energy had approved just one export terminal for exports to non-free trade agreement countries, Cheniere Energy's (NYSEMKT:LNG) Sabine Pass Terminal in May 2011. Before approving any more, the Department of Energy commissioned reports to study the effects of approving any more terminals, as the DOE has responsibility to make sure new terminals do not "subsequently lead to a reduction in the supply of natural gas needed to meet essential domestic needs." Chemical companies, especially Dow Chemical (NYSE:DOW), have been major opponents of the U.S. exporting natural gas in an unchecked fashion, as they hope to benefit from the current low prices. While the studies were going through, applications built up. All are approved for export to countries with which the U.S. has free trade agreements (FTA), but the DOE needs to approve each one individually for export to non-FTA countries. 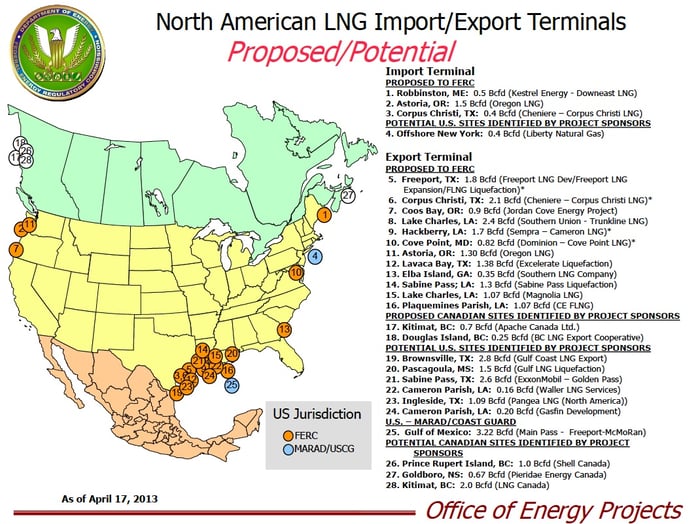 The DOE now has 24.94 bcf/d of potential export capacity waiting to be approved. Exports are a massive opportunity for the U.S. as there is such a large gap between U.S. and world LNG prices. For the past few years, low natural gas prices have been crushing natural gas producers. With the downturn, many producers have followed SandRidge Energy's (NYSE: SD) lead in shifting to drilling for oil while others, most notably Chesapeake Energy (OTC:CHKA.Q), have had to resort to selling off natural gas assets to make ends meet.

Producers are thus excited by the DOE's conditional approval of Freeport LNG's export terminal, which would hopefully be the start of more approvals. Interestingly enough, Dow Chemical holds a 15% limited partnership involvement in Freeport LNG Limited, but it is not involved in the facility’s daily operations. This original investment was made when the Freeport LNG facility was an import terminal and was not meant to hedge against the potential for higher natural gas prices should exportation be approved. The Freeport LNG terminal is approved for up to 1.4 bcf/d of exports. This brings total approved export capacity in the lower 48 states up to 3.6 bcf/d. With this conditional approval it will still take years for the terminal to get up and running. The terminal first needs authorization from FERC to begin construction, and then, once started, it is expected that the terminal would take four to five years to build.

While the approval doesn't mean much in the short run, in five years or so exports should boost the prices natural gas producers receive for their natural gas. Expected cash flows play a big part in determining estimated stock price valuations after being discounted back to the present using an appropriate risk-adjusted cost of capital. Therefore, as approvals roll in, valuations for those involved are almost certain to rise.

Editor's note: A previous version of this article did not clearly state the relationship between Dow Chemical and Freeport LNG. The Motley Fool regrets the error.