Global financial services giant JPMorgan Chase (NYSE:JPM) announced yesterday its second-quarter dividend of $0.38 per share, a 27% increase from the payout made last quarter of $0.30 per share.

The board of directors said the quarterly dividend is payable on July 31 to the holders of record at the close of business on July 5. During the financial crash of 2009, JPMorgan was forced to cut its dividend to $0.05 per share, but it has increased the payout annually since.

It also said shareholders at its annual meeting approved all five company proposals, including the election of the bank's directors, ratification of PricewaterhouseCoopers as its independent registered public accounting firm, approval of the company's executive compensation plan, authorizing shareholder action by written consent, and reapproval of the performance plan for key executives.

There were also four shareholder proposals put forth, none of which was approved.

The regular dividend payment equates to a $1.52-per-share annual dividend yielding 2.9% based on the closing price of JPMorgan Chase's stock on May 21. 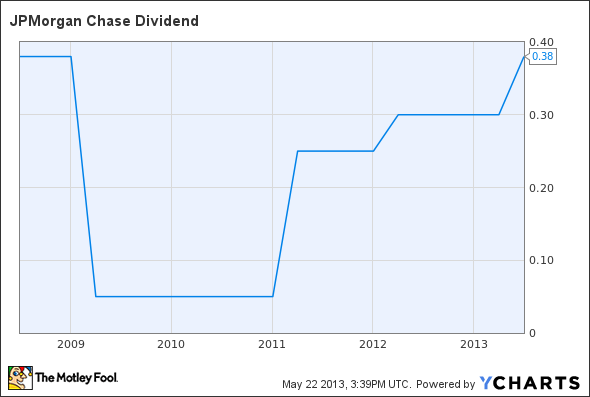