It seems a terrible understatement to say Yahoo! (NASDAQ: YHOO) CEO Marissa Mayer has been busy over the past year.

Of course, earlier this week Yahoo! stock touched the highest levels investors have seen in nearly five years, so apparently she's been doing something right. In fact, since Mayer was named CEO on July 16, 2011, shares of Yahoo! have nearly doubled, trouncing the otherwise respectable performance of the S&P 500: 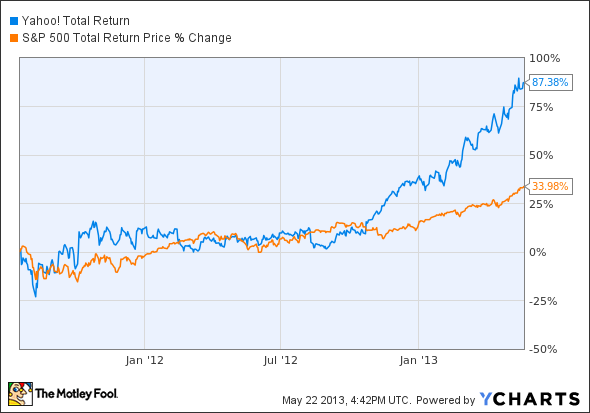 So what, exactly, has happened since Mayer took the helm?

In short, she has worked tirelessly to secure Yahoo!'s place as a permanent fixture in the lives of millions of netizens, primarily through the company's involvement in roughly a dozen of its users' "daily habits." Those habits include (among others) performing web searches, checking email, watching videos, and viewing daily news, sports, and finance feeds.

Bold moves
Of course, Mayer hasn't shied away from controversy along the way, most notably taking flack for her much-publicized decision to ban telecommuting at Yahoo! in February.

Naturally, many employees and outsiders alike were angered by the decision, especially as Mayer reportedly constructed a nursery next to her office -- at her own expense, mind you -- to be nearer to her own infant son while at the same time enabling her to work longer hours.

What fewer people have realized is that Mayer also recently doubled the paid maternity leave for her employees to 16 weeks, while at the same time introducing a policy to allow new fathers to take up to eight weeks of paid leave. In addition, parents who adopt are now allowed to take eight paid weeks off from work, and new parents are given $500 to spend on baby items and related services.

Mayer explained her telecommuting ban in April by simply saying, "People are more productive when they're alone, but they're more collaborative and innovative when they're together. Some of the best ideas come from pulling two different ideas together."

And Mayer would know, especially after more than 13 years at Google (NASDAQ:GOOGL) which just so happens to have topped Fortune's list of the 100 Best Companies to Work For in both 2012 and 2013. In fact, at the time she instituted the ban, Google was generating almost $932,000 in revenue per employee, compared to just under $345,000 per employee at Yahoo!. Curiously enough, that gap has narrowed since then to about $993,000 and $419,000 in revenue per employee for Google and Yahoo!, respectively.

Then again, while I still think it's naive to believe Yahoo! (or any other company, for that matter) will ever be able to surpass Google's more than 80% market share in search, their supplementary efforts could very well morph the company into an equally thriving long-term business.

To its credit, Yahoo! is finally being perceived as a better place to work. Last month, for instance, Mayer stated nearly twice as many people are currently applying for jobs at Yahoo! compared to the same time last year, while the rate of "top talent" leaving the company has been reduced by about half.

On redesigns and acquisitions
In addition, Yahoo! Mail enjoyed a design refresh late last year, and the company acquired Summly -- a slick little news summarization app -- for around $30 million in March.

Then on Monday, Yahoo! unveiled a dramatic redesign of its massively popular photo sharing site, Flickr.com, while simultaneously announcing its $1.1 billion acquisition of blogging specialist Tumblr.

Tumblr, for its part, boasts more than 105 million different blogs visited by 300 million unique users each month, and while it remains to be seen exactly how the folks at Yahoo! plan to further monetize their new prize, some sources say Tumblr is expected to grow annual revenue from just $13 million last year to $100 million in 2013.

Mayer also wasted no time promising Yahoo! wouldn't "screw it up," and further explained Yahoo! covered its bases by performing multiple valuation analyses -- all of which apparently supported the $1.1 billion valuation. While time will tell how it all turns out, at least one of my fellow Fools already thinks Tumblr is big a win for Yahoo!.

Foolish final thoughts
In the end, the folks at Yahoo! have moved startlingly fast to stabilize their faltering business. Thanks to low expectations in the face of strong competition, investors holding Yahoo! stock have been rewarded handsomely as a result. Assuming Mayer can continue building on her achievements, I see no reason to believe the outperformance by Yahoo! stock won't continue.