Over the last several years, Microsoft (NASDAQ:MSFT) has watched as competitors like Apple and Google have gradually chipped away at its monopoly control of personal computing. Microsoft stock has endured a "lost decade," as the success of initiatives in entertainment (Xbox) and cloud computing (Windows Azure, and now Office 365) has been offset by massive losses associated with the Bing search engine and the stagnation of Windows. 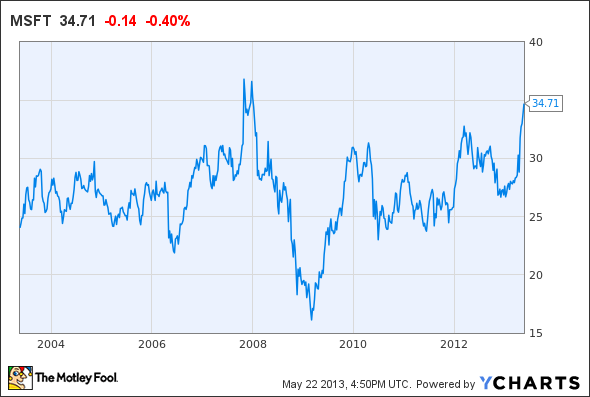 Microsoft's management has adapted to the changing market environment -- albeit slowly -- by trying to adopt some of the best features of its competitors' offerings. For example, Office 365 tries to bring Microsoft Office into the world of Google Docs by offering cloud storage and collaboration tools. The new Windows 8 interface was designed to be "touch-friendly," and the Surface tablet was created to provide a model Windows tablet experience.

However, Microsoft's initiatives always seem to be "too little, too late." While Microsoft stock has rallied to a multi-year high recently (after Q3 earnings were better than feared), long-term earnings growth is likely to prove elusive. Even though Microsoft stock trades at just 11.3 times forward earnings, investors should consider selling and taking profits now.

Windows isn't what it used to be
The root of Microsoft's problems is the decline of the Windows operating system. While the PC industry is in no imminent danger of dying out, the growth of tablets is cannibalizing the low end of the market. Netbook sales peaked at more than 32 million in 2010 -- not coincidentally, the year that Apple released the iPad -- but are expected to drop to zero by 2015, according to IHS iSuppli.

Moreover, the growth of tablets is likely to lengthen the PC refresh cycle, a phenomenon that's already taking shape. Since PC performance is not improving at the same rate seen 10 or 15 years ago, most PC users can wait five or six years between PC upgrades.

Microsoft tried to offset the cannibalization impact of tablets through a redesigned touch-friendly Windows 8 interface. Microsoft stock rose last spring and summer as anticipation of the new OS built. However, early sales of Windows 8 PCs has been disappointing, and Microsoft has reportedly been forced to cut OEM prices (at least for some versions of Windows ).

The Windows 8 tablet concept initially seemed quite promising, as it would allow users to run legacy Windows apps with a tablet form factor. Such functionality seemed very appealing for businesses. (Consumers had already adopted the iPad in large numbers.) However, Microsoft was too late to the tablet party; Apple has repeatedly touted the iPad's strong penetration of the enterprise and education markets. Enterprises that have adopted the iPad, and built custom iPad-specific apps, are unlikely to switch to Windows tablets later.

Potential carry-over effects
So far, the cannibalization of Windows has not hurt Microsoft's earnings too much. For the fiscal year to date, Microsoft has seen a slight decline in diluted EPS, from $2.05 in FY12, to $1.99 in FY13. Microsoft stock has benefited from the perception that the worst is over, and that the company will return to earnings growth next year.

However, the poor performance of Windows is beginning to trickle over to the "Business Division," which primarily houses Microsoft Office. Since customers usually buy a new Microsoft Office license when they buy a new PC, the PC sales slump is hurting Microsoft in two ways.

On top of this problem, many people are finding that the free Google Drive productivity tools are "good enough" for their needs. Microsoft is trying to drive higher usage of Office among students through a recent promotion giving students six months of free access to Office 365 (the company's new cloud-based version of Office). After that, students can get four years of access for just $80.

Office remains a must have for businesses, and many consumers will continue to use Office, as well. However, the rise of competition from Google and other free productivity suites is forcing Microsoft to offer deeper discounts than was previously common.

Foolish bottom line
If Windows and Office have both peaked, as I believe, Microsoft stock isn't likely to make any progress in the next few years. The two divisions are still cash cows, and combined for more than $27 billion of operating income last year (excluding unallocated corporate expenses ). However, if earnings from those businesses gradually decline due to poor PC sales trends and a continuing shift to free productivity tools, Microsoft will be unable to make this up through growth elsewhere.

Microsoft has touted its progress in cloud services and in the "living room" to investors. On Tuesday, the company revealed the next-generation Xbox One, which offers a number of improvements over the Xbox 360. Still, it is unlikely to be the game changer that investors hope for. The Xbox business is too small to drive company-wide earnings growth in light of the likely continuation of weakness in Windows and Office sales. As a result, investors might be wise to sell Microsoft stock while it sits near multi-year highs.