Someone has made a big mistake. We don't know yet, though, who the mistaken party actually is.

A few commentators are gleefully proclaiming that Obamacare has received good news from the state of California. They note that rates recently announced for the state's health insurance exchange are significantly lower than what the Congressional Budget Office projected. This, they say, signals that Obamacare could unleash competitive market forces that lower insurance costs.

Others, including my colleague Sean Williams, observe that several major insurance companies aren't participating in the California Obamacare exchange, including Aetna (NYSE:AET), Cigna (NYSE:CI), and UnitedHealth Group (NYSE:UNH). Their question goes along these lines: "Why would these companies decline to participate in one of the largest markets in the nation if there isn't an inherent problem with how Obamacare will function?"

If the California Obamacare exchange is destined for success, three of the nation's largest insurance companies could have made a very costly mistake in not jumping into the fray. If these companies' caution proves wise, though, the insurers that are participating in California could be in for financial challenges if they underestimated costs. Who made the mistake? Here are a few things to consider.

Comparing costs
Back in 2009, the CBO originally projected that a middle-of-the-road "silver plan" could cost $5,200 per year -- or around $433 per month. Instead, the least expensive silver plan in California's exchange will cost $276 per month. That cost will be even lower for individuals qualifying for federal subsidies.

The most optimistic scenario calls for around 5 million people to purchase insurance through the California exchange. This flood of new members would enable those insurers participating in the exchange, including Kaiser Permanante, WellPoint's (NYSE:ANTM) Anthem Blue Cross, Blue Shield of California, and Health Net (NYSE: HNT), to make more money on higher volume while offering insurance at lower costs. Capitalism at its finest, right?

A gloomier scenario is that a much lower number will buy insurance through the exchange, possibly causing participating insurers to lose money because they based their rates on overly rosy assumptions. This prospect probably caused the hesitancy of Aetna, Cigna, and UnitedHealth.

While we won't know which scenario will unfold for a while, there are a couple of other cost comparisons to keep in mind. An individual in California can get coverage through Kaiser right now for as low as $82 per month -- but the state still has around 7 million people without insurance. Even with subsidies, a 21-year-old California who makes around $35,000 per year will have to pay $64 per month for the cheapest Obamacare plan.Around 2.6 million Californians will probably qualify for some level of federal subsidies, leaving around 4.5 million currently uninsured individuals with no financial assistance.

The other cost to remember is $95. That's the penalty (for an entire year) that a person must pay if he or she doesn't buy insurance.Will individuals who choose not to pay as little as $82 per month now for insurance prefer to pay a little less for insurance under Obamacare -- or will they instead go with the much cheaper penalty? Success or failure for the insurers and for California's Obamacare exchange hinges on the answer.

Comparing track records
For insurers, the primary challenge is making enough revenue to at least cover medical costs. Public companies must also generate profits to please shareholders. An organization's historical track record in making profits could provide a clue about how likely that organization is to make profitable decisions going forward.

In the case of California, two publicly traded companies opted to participate in the exchange while three chose to stay out. How do their track records compare? 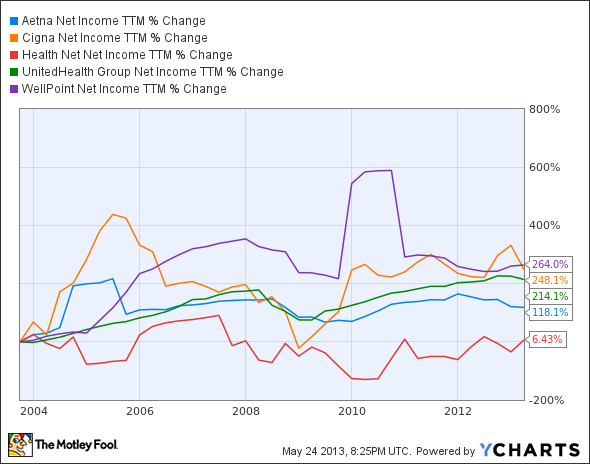 Over the past decade, WellPoint narrowly leads Cigna in net income percentage gain. UnitedHealth comes in close behind in third position. Aetna lags behind these three insurers, while Health Net turned in the worst performance by far.

On average, the three insurers deciding against participating in the California exchange have performed better in growing their bottom lines than the two that are participating. Does this mean these companies calculate risks more effectively? Not necessarily. There really are too many variables to draw a hard conclusion.

Another track record to consider is how well the companies have done in California in terms of market share. On this front, the insurers opting to compete in the exchange clearly fare better. 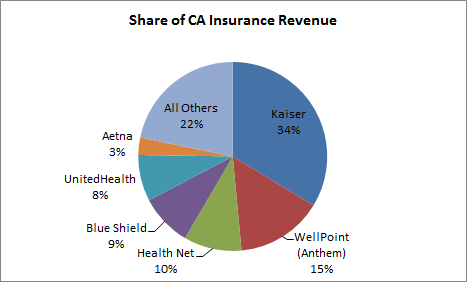 However, simply having a larger market share doesn't mean that companies electing to be included in the California exchange are making a better decision. A larger presence in the state, though, might have swayed these companies to hold premiums as low as possible to prevent erosion in market share. If so, this could imply that the lower costs hailed for the California exchange won't necessarily carry over to other states.

Mistaken?
We could argue that all of these insurers have made the best decision for their respective organizations -- regardless of their participation in the California exchange. Each one has differences in their business models that undoubtedly factored into their calculations. Could the premise that a big mistake was made be mistaken itself? I don't think so.

If nothing else, the CBO made a big mistake. Maybe the government's calculation back in 2009 was just way off. Usually, the CBO has a decent track record in projecting costs. But it is still part of the government. Making mistakes is an area where the government has been known to excel.