Raising the minimum wage has become a hot-button issue in the U.S. recently, with President Obama having called for a raise in the federal minimum wage in his 2013 State of the Union address. Many U.S. states have followed suit with proposals of their own to raise their minimum wages, with nearly 20 states already having set wage levels above the $7.25 federal minimum.

When you look around the world, the U.S. ranks among the top countries for its minimum wage. But you can find several countries that pay workers a lot more. Let's look at five of the highest-paying countries for minimum-wage workers, with wages given in U.S. dollar terms using current currency-exchange rates. 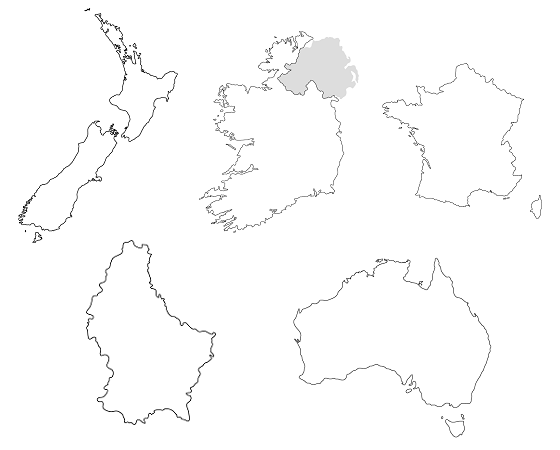 New Zealand, $11.13 an hour
New Zealand workers are entitled to minimum wages of 13.75 New Zealand dollars an hour. The most recent rise came earlier this year, with a boost of NZ$0.25 coming in February. However, along with that rise came a controversial new "Starting Out" wage program for younger workers, under which those aged 16 to 19 can receive as little as 80% of the adult minimum. Proponents argue that with youth unemployment soaring over 30% in New Zealand, the measure will encourage greater job creation for young workers. Opponents, however, argue that the wage is discriminatory and that similar measures in the past to promote job growth have failed.

Ireland, $11.15 an hour
In Ireland, workers are entitled to 8.65 euros per hour, having been raised from 7.65 euros as of mid-2011. For workers who are under 18, a lower minimum equal to 70% of the full minimum wage applies, while those 18 or older who are in their first or second years of employment can be paid as little as 80% and 90% of the minimum wage, respectively. In addition, lower rates ranging from 75% to 90% apply to workers in approved structured training courses.

France, $12.21 an hour
French minimum-wage workers just got an increase in their pay at the beginning of 2013, with a small rise to 9.43 euros an hour coming after a larger increase in June 2012. The French government said 2.6 million workers would benefit from the higher minimum wage. France ranks among the top countries in the world in terms of worker-pay equality, with the minimum wage representing more than 60% of the median wage across all full-time workers.

Luxembourg, $14.02 an hour
The tiny country nestled between France and Germany pays unskilled workers 10.83 euros an hour, with 16-year-olds entitled to 75% of that amount and 17-year-olds getting 80%. However, for skilled employees, the minimum wage is 20% higher, putting a tangible premium on improving job skills.

Australia, $15.40 an hour
Australia pays full-time adults 15.96 Australian dollars an hour. But there are a wide variety of sub-categories in the minimum-wage laws. For instance, workers under 16 can get paid as little as A$5.87 an hour, with a sliding scale for those ages 16 to 20 that goes from A$7.55 to A$15.59. In addition, apprenticeships have special amounts, ranging from A$10.22 in the first year to A$17.65 in the fourth year.

What national minimum wages mean for investors
It's important to realize that minimum-wage laws affect companies only to the extent of their operations in their home countries. For instance, in Australia, mining giants BHP Billiton (NYSE:BHP) and Rio Tinto (NYSE:RIO) have to follow minimum-wage laws for their Australian operations, but elsewhere around the world, both companies have faced labor disputes over pay levels that in some cases are much lower than what Australian law would require domestically. Moreover, even as Eaton (NYSE:ETN), Actavis (NYSE:AGN), and other companies have moved or are in the process of moving their corporate headquarters to Ireland, you shouldn't expect a huge shift of employees that would require higher pay.

In addition, wages are only part of the labor cost that companies bear. With countries having different tax rates and social programs and requiring different levels of benefits, you have to look at the entire labor-cost picture to get a true sense of what businesses pay on behalf of their employees.

Nevertheless, in terms of competitiveness, labor costs are a key component of profitability. With every dollar that workers receive taking a dollar of profits away from the bottom line, companies will inexorably seek out places where productivity-adjusted wages are as low as they can find. That makes national minimum-wage legislation an important aspect of preventing a race to the bottom for wage rates worldwide.