A power management company, a bulked-up food producer, and a veteran bank are all on our list of payout lifters for this week.

February is now over, which is sad news for income investors. It was bursting with dividend raises, after all, not least because it came just after the end of many companies' fiscal years.

True to form, the final full week of month saw a host of stocks boost their payouts. Here are three I believe are particularly worthy of note:

Eaton
A business slump isn't stopping power management company Eaton (ETN -1.59%) from adding juice to its dividend. The company declared a 4% raise in its quarterly distribution to $0.57 per share.

That was to be expected; drooping fundamentals aside, Eaton is a habitual dividend payer, and it likes to increase the payout annually around this time of the year.

The 2016 edition comes as the company struggles on all fronts, with all five of its business lines reporting revenue declines on a year-over-year basis in Q4. In total, top line slid by 9% (to just over $5 billion), while net profit fell 8% to $532 million. 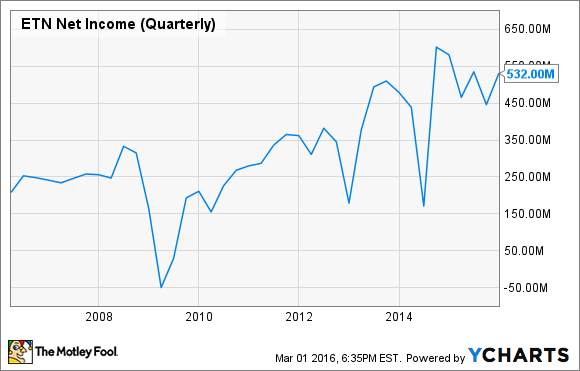 Going forward, the latter shouldn't take too damaging a hit, as Eaton is making a stronger push to cut costs; these are planned to total $400 million between last year and next. Meanwhile, free cash flow is robust, and the new dividend is well within the company's means. Eaton isn't doing gangbusters just now, yet I don't think the dividend is at serious risk.

Eaton will hand out its upcoming distribution on March 18, to stockholders of record as of March 7. At the current stock price, it yields just under 4%. This is comfortably above the 2.3% average yield of stocks on the S&P 500 index.

Toronto-Dominion Bank
These days, many bank sector incumbents are trying to reduce their physical footprints by getting their customers to bank online rather than at the local branch.

Not so at Canada-based Toronto-Dominion Bank (TD -1.68%), which is happy to keep its doors open for clients. Advertising itself within our borders as "America's Most Convenient Bank," it boasts an ever-expanding network of branches that stay open late and on weekends, and offer a big menu of services.

The bricks and mortar strategy is counter-intuitive in this digital age, but it works. That growing branch lineup has boosted the lender's key fundamentals, particularly total assets, loans, and net income. All of these line items have risen consistently for years, in some cases at substantial rates.

The company still has great potential. There's a great deal of scope to enlarge its credit card portfolio, for example, and much business to tap in the wealth management sphere.

Meaning that there's also plenty of space to grow that dividend -- which, by the way, the bank has been shelling out since 1857. 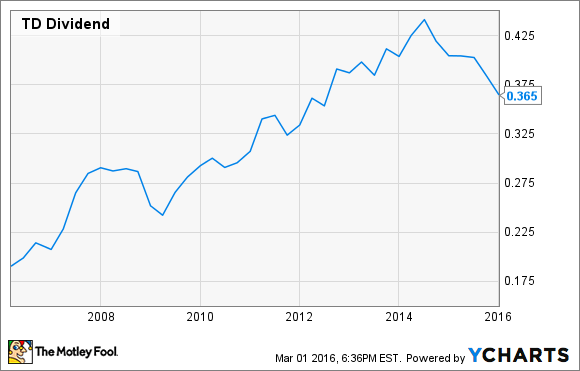 The next payout will be dispensed on April 30 to shareholders of record as of April 8. At the current USD/CAD exchange rate, the dividend yields a comparatively generous 4.1% on the company's US-listed shares.

B&G Foods is a serial dividend payer; in the press release heralding the new one, it didn't hesitate to mention that it will be its 46th in a row since its IPO in October 2004. Over that stretch of time, it has ranged from $0.17 to the present level. 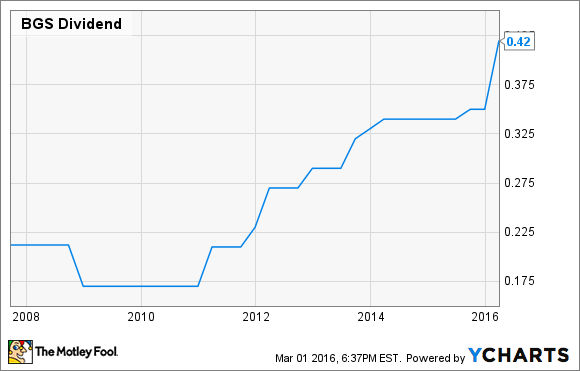 The company is much bulkier these days, thanks to its purchase last September of Green Giant and complimentary frozen foods and canned vegetable brand Le Seur from General Mills. This cost a pretty penny, at $765 million, but it gave the company a pair of lines that is set to boost net sales by 64%, and earnings by 72%.

The company completed the Green Giant/Le Seur acquisition in November, meaning that its results will start to be incorporated into those of the parent company. The extra dosh will help sustain the new dividend, even at that well-enhanced rate.

Said distribution is to be paid on May 2 to stockholders of record as of March 31. At the current stock price, it yields a healthy 4.9%.

Eric Volkman has no position in any stocks mentioned. Nor does The Motley Fool. We Fools may not all hold the same opinions, but we all believe that considering a diverse range of insights makes us better investors. The Motley Fool has a disclosure policy.

1 Surprising Way Stocks Can Bite You at Tax Time
366%