This past week at the All Things Digital conference in California, Mary Meeker -- a partner at Kleiner Perkins Caufield & Byers -- presented her long-awaited slideshow, "Internet Trends." If there was one big takeaway, it was this: The opportunity in mobile computing is enormous, and companies that learn how to monetize it most effectively will be the biggest winners.

Growing fast, with a long runway

The overall pie of Internet users continues to grow at a steady pace, up 8% globally last year. Overall, 2.4 billion people on the planet have regular access to the Internet, equating to a 34% penetration rate. With two-thirds of the world still not familiar with the World Wide Web, elevated levels of growth could continue for more than a decade.

More important, however, is the fact that the percentage of Internet use taking place on mobile devices has shown astonishing growth over the past four years. 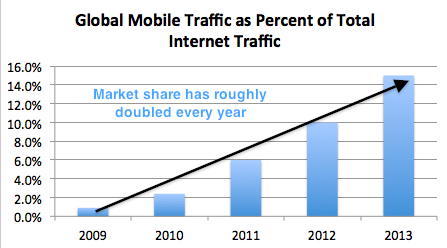 This underscores just how important Google's (NASDAQ:GOOGL) Android operating system is to the company. While some scoff at the fact that Android is an open-source platform that Google essentially gives away for free, Android helps ensure that Google will remain relevant.

Instead of allowing upstarts to develop their own mobile search platform, Android users have Google embedded as their automatic search tool. This simple (yet incredibly powerful) fact means that Google will continue to dominate the search market via both desktop and mobile computing.

Meanwhile, there's a reason Chinese search engine Baidu (NASDAQ:BIDU) is spending so much money right now to develop an effective mobile strategy. Mimicking global trends, Chinese Internet users are now more likely to access the Internet via their mobile devices than a desktop computer. Though Meeker's data is more detailed, the general trend lines look like this: 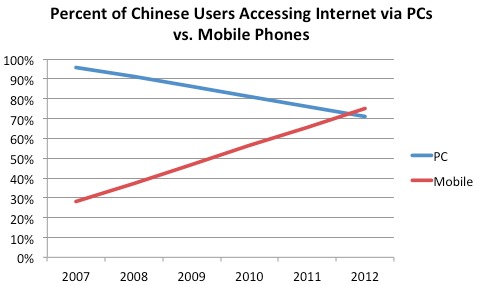 Baidu has agreements in place with China Telecom, China Unicom and China Mobile to have Baidu's mobile search engine embedded within the carriers' 3G phones, helping it, too, retain market share.

Monetizing the trend
But gaining market share alone isn't enough.  Take a look at the mismatch between the amount of time we spend on different types of media, and the percentage of advertising dollars devoted to each category. 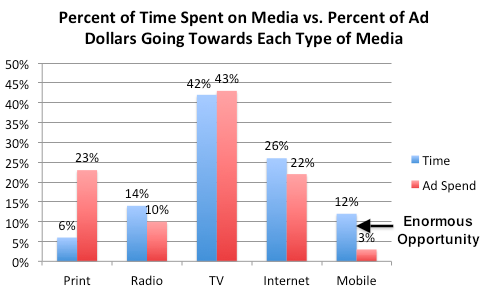 In my opinion, both Google and Baidu are still only in the beginning stages of optimizing their monetization strategies for mobile.  This -- more than anything else -- is the variable that investors should keep an eye on.

Are there other ways to play this trend?
Mobile phone makers have a huge opportunity as well.  If the developing world wants to gain access to the Internet, smart phones are far more practical than desktop computers, as they are both cheaper, and serve dual purposes.

Currently, Samsung is winning the battle, as 44% of all Android phones shipped in mid-2012 were from Samsung. Coming in second, and still holding a significant share, is Apple, whose iOS claims a 17% market share.

Rounding out the bottom are Research in Motion's Blackberry and Nokia, the primary manufacturer of Microsoft's Windows smart phones. 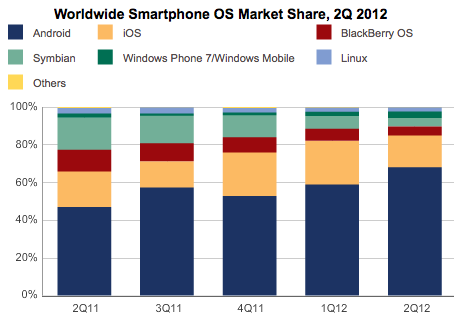 Though you can't invest in Samsung (except for OTC markets), Apple is clearly the most investable of these four companies when it comes to the smartphone trend. Microsoft's Windows 8 has not shown as much promise as management had hoped for. And surveys show that BlackBerry 10, RIMM's new operating system that is supposed to save the company, isn't even on the radar of most potential buyers.