It hasn't been easy for oil and gas producers as they've drilled into the Utica Shale of Ohio. Producers have faced a number of issues, including finding the play to be much less oily than hoped, while facing push-back when using water for fracking even as production is being held back by a lack of infrastructure. This has made several producers think twice about whether the Utica will ever develop into a top-tier play.

While producers can't do much about what resources are found underground, the infrastructure issues appear to be coming to an end. That's great news for the region, as Chesapeake Energy (OTC:CHKA.Q) has long since said that the lack of infrastructure is what is holding the Utica Shale back from displaying its true potential. Consider that Chesapeake has drilled 249 wells into the play, yet just 66 are currently producing. The company still had 86 wells waiting on pipelines, while 97 were in various stages of completion. To have more than a third of its wells just waiting for infrastructure is a problem.

MarkWest Energy (NYSE: MWE) has taken this as a challenge and will soon be the top infrastructure provider in the region. During the year it plans on bringing a 100,000 barrel per day fractionation facility on line with truck, rail, and pipeline access. This facility will also have access to fractionation facilities in the Marcellus Shale. This addition broadens a portfolio that already houses multiple facilities capable of refrigeration, cryogenic processing, and fractionation. As you can see from the following slide, the company has a number of projects under construction to meet the growing needs of producers in the region. 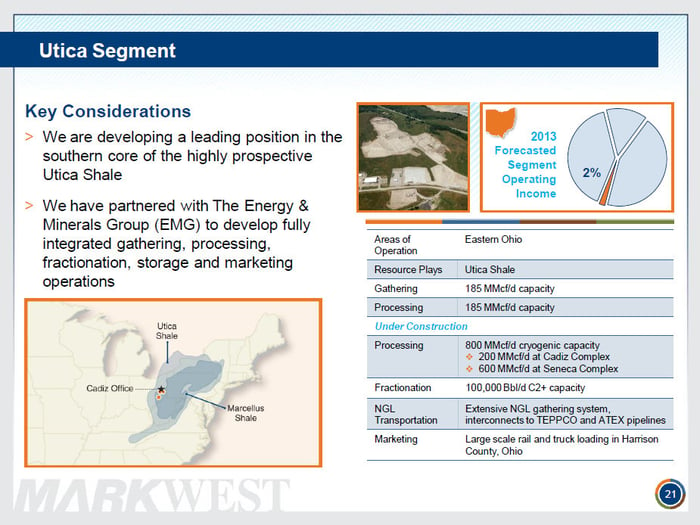 Outside of MarkWest, Dominion Resources (NYSE:D), through its Blue Racer Midstream joint venture, is investing heavily to provide infrastructure to the play. The company is adding to its high-pressure gathering system which will have handling capacity of up to 2 billion cubic feet per day. The venture is also adding up to 2 billion cubic feet of incremental processing capacity in the region. As production grows the venture can be expanded further to take advantage of those opportunities.

These infrastructure additions are important for Gulfport Energy (NASDAQ:GPOR) which is pouring nearly all of its resources into developing the Utica's assets. If its wells provide the type of production it is expecting, this infrastructure build-out will prove critical to Gulfport's ability to deliver its product to market. The additions are also important for Rex Energy (NASDAQ: REXX) which is investing more than 30% of its more than $255 million 2013 capital budget to develop its acreage in the Utica.

As more wells have access to infrastructure it will really give us a clearer picture of the Utica's potential. MarkWest is really leading the way as it is developing the leading position in the southern core of the play. By the end of next year it should have over 900 million cubic feet per day of processing capacity along with 100,000 barrels per day of fractionation capacity. The good news here is that the Utica's potential won't be held back much longer.