Please ensure Javascript is enabled for purposes of website accessibility
Log In Help Join The Motley Fool
Free Article Join Over 1 Million Premium Members And Get More In-Depth Stock Guidance and Research
By Morgan Housel - Jun 4, 2013 at 8:48AM

The 2002 book Bringing Down the House told the true story of how six MIT math geniuses mastered blackjack card counting and took Las Vegas for millions. It had money, sex, drugs, and power. People loved it.

But part of the story often went misunderstood. The card-counters didn't win every hand of blackjack, or anything close to it. The casino normally has a slight edge over players. The MIT crew's strategy tipped those odds just barely in their favor. That meant they still lost a lot of bets. "Even the most complex systems seemed to aim at an overall edge of around 2 percent," author Ben Mezrich wrote.

But that tiny edge was all the crew needed to succeed, provided they played long enough. When the odds are even slightly in your favor, you will win over time, even if you lose often in between.

That's why I'm an optimist on the economy and the market. Maybe even a permanent optimist.

Take a look at this chart, showing GDP per capita adjusted for inflation since 1850: 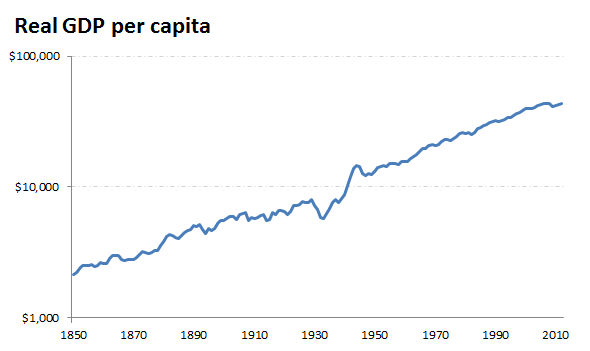 And yet our standard of living increased 20-fold.

Being an optimist doesn't mean I don't think bad things will happen. They will. Like the MIT players, I'm going to lose a lot of hands. But also like them, I'm confident that the long-term odds are in my favor.

I am a big believer that there are more people waking up in the morning saying "I want to be smarter and better than I was yesterday" than there are waking up saying "the world is doomed, I should build a bunker and hide out."

That's really all there is to it.

130,000 people will graduate with a degree in engineering this year. You don't think a few of them will do something amazing?

American households have $66 trillion in net worth. You don't think they'll do something productive with it?

2.8 billion people survive on less than $2 a day. You don't think they'll jump at every opportunity to improve their lot?

Then I feel bad for you. And I'll take the other side of the trade.

The reason there are so many pessimists comes down to two points.

One, pessimists are persuasive. They exploit fear and doubt. As Josh Brown writes, "Pessimism is intellectually seductive and the arguments always sound smarter, especially when they dovetail with our own worries." There's evidence that people hate losing money more than they like making it. That makes you more susceptible to following the pessimists' warnings than the optimists' outlook.

Two, many people either lack a living wage, or (more common in the developed world) live beyond their means and take too much risk, which removes the possibility of sticking it out through the long term.

The most important skill the MIT card-counters had was fooling the casino's security staff, since getting kicked out meant they couldn't play long enough to exploit their slight statistical edge. It's similar for investors. The difference between a "rah-rah" optimist and a rational optimist is the latter can endure the inevitable bad hand. You have to be pragmatic in your optimism. Are you investing in stocks for the next two or three decades? Then you're going to experience several recessions, dozens of pullbacks, and multiple crashes. If you can't afford to live through them, you need a different asset allocation. But those who can stick it out through the ups and downs will very likely enjoy big returns in due time. They have the house's odds.

That makes me optimistic.

"Count the perma bears on the Forbes 400 list or the amount of pessimists who run companies in the Fortune 500," Josh Brown writes, "You will find none."