It's been crunch time in Cupertino. Apple (NASDAQ:AAPL) has been scrambling to ink the necessary licensing deals with the major record labels for its presumed "iRadio" service ahead of its Worldwide Developer Conference, or WWDC, which kicks off next week.

Major rival Google (NASDAQ:GOOGL) launched its own online music streaming service -- called All Access -- last month at Google I/O. That pre-emptive strike left Apple scrambling to catch up, but the Mac maker had reportedly been stalled with negotiations. Up until now, Apple had secured two out of the three major record labels (Warner and Universal), and Sony (NYSE:SONY) Music was the last label to sign on.

AllThingsD now reports that Sony is onboard, and that the two companies have inked a deal. That means that Apple's service is about ready for prime time, although it may only be unveiled during the WWDC opening keynote on Monday. iRadio may not launch until later this year.

Apple is expected to take a more innovative approach compared to All Access, as well as incumbents like Pandora (NYSE:P) and Spotify. Pandora shares have been volatile lately on concerns about Apple's upcoming entry. The company reported earnings last month, with shares briefly jumping to flirt with $20, only to promptly pull back by over 25% since.

So far this year, Pandora's market share has been under slight pressure as well. The music streamer just released its audience metrics for May, and its share of the U.S. market continues to decline. 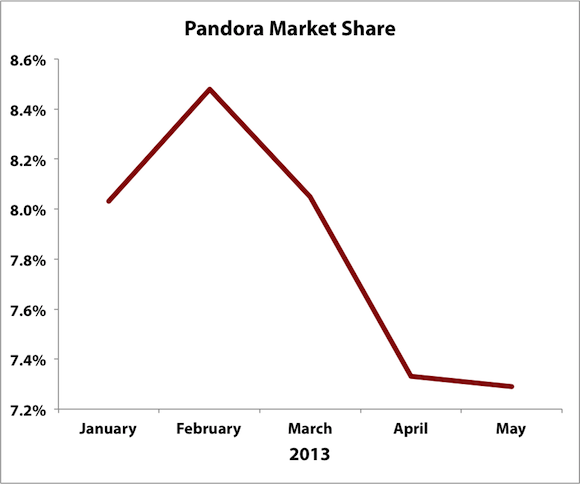 Pandora delivered 1.35 billion listener hours, which translated into a domestic market share of 7.3%. Both figures were up from a year ago, but also continue to trend lower year-to-date. Active listeners climbed to 70.8 million, a steady improvement.

Apple's service is expected to be free and iAd-supported. Music has never been a major profit center for Apple. iTunes revenue has grown significantly over the year, but most of the operating profit from software and services comes from Apple's first-party software. Third-party content in iTunes, like music and apps, has historically run just above break-even, with Apple's primary motive being to offer a large repository of complementary content to boost iDevice unit sales. The same will be true for iRadio. Apple is more interested in embracing the shift in consumer preference toward access models to sell more iPhones than it is in directly monetizing any music streaming service.

Given licensing deals with the big three labels in hand, Apple may finally be ready to launch its Pandora killer.