The most hated company in the world right now isn't a member of Big Oil. It's not a shady Internet company or a bailed-out megabank. Populist discontent toward dirty energy, high-tech snoops, and greedy bankers has occasionally been fierce, but it's never been laser-focused like the outrage that drew an estimated (by the organizers) 2 million protesters to anti-Monsanto (NYSE:MON) rallies in more than 50 countries at the end of May.

Think about that. If those numbers are accurate, a single private company drew almost as many protesters in a single day as the worldwide Occupy movement at its peak. Monsanto didn't even have to bankrupt any economies or leech billions of dollars off taxpayers. All it took was three little letters: GMO. 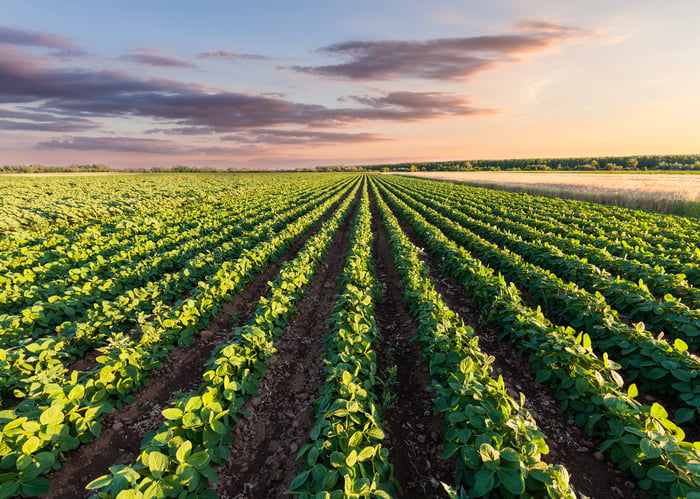 What is GMO?
You probably know something about GMOs, which stands for genetically modified organisms, since it's as closely associated with Monsanto as "IRS" is with taxes. The popular definition of a GMO is (according to Wikipedia) "an organism whose genetic material has been altered using genetic engineering techniques." If you want to get pedantic about this definition, humankind has been genetically modifying organisms ever since the first nomads settled down to grow crops, since virtually nothing we eat today is the same exact plant or animal (or Twinkie) it was 10,000 years ago. But that's not why everyone's afraid of Monsanto. Monsanto is scary because -- in the eyes of detractors -- it's compressing 10,000 years of genetic adaptations into 10 years of mad science.

The history of commercialized GMO foods as we now know them began just two decades ago, with an "enhanced" tomato that was so unprofitable to produce that its developer wound up selling itself to Monsanto. Since then, other developments have embedded GMOs into a rather substantial part of the world's food supply. 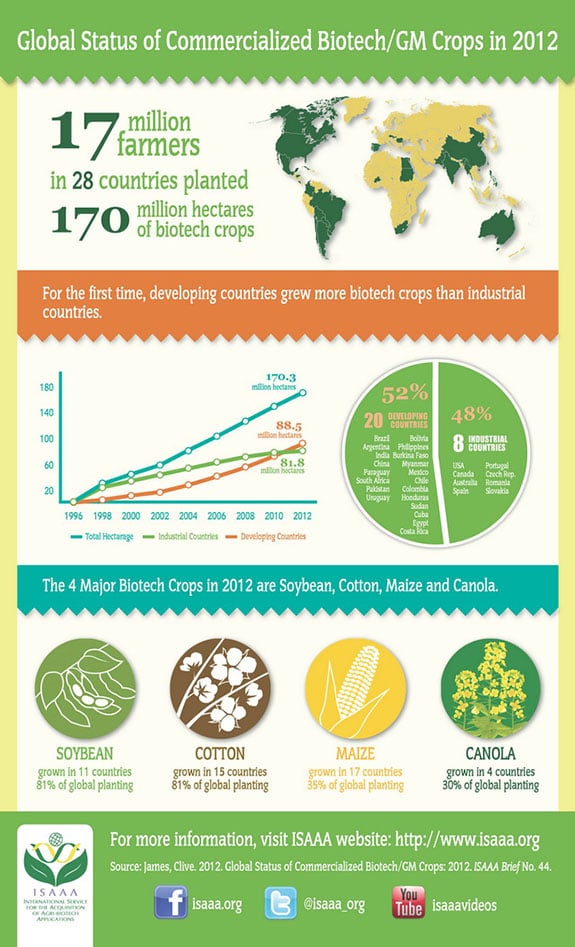 Total global cropland, by comparison, amounts to roughly 1.5 billion hectares, so GMOs now take up more than 11% of all cropland in the world. ISAAA -- the International Service for the Acquisition of Agri-Biotech Applications, a pro-GMO nonprofit supported in part by Monsanto's funding -- says that GMOs have made 100-fold gains in terms of planted cropland since 1996. The United States, Brazil, Argentina, Canada, and India comprise the lion's share of GMO cropland, as more than 152 million of the world's 170 million GMO hectares are found in those five countries.

All of this adds up to big business. The six largest seed-and-weed companies -- which typically pair specially engineered seeds with herbicides that often eliminate any plants not attuned to their unique chemical structure -- accounted for close to $50 billion in global sales across their various product lines in 2009, the last year for which complete data was available:

Fear of a mod planet
A quick search of "GMO" will turn up all sorts of scaremonger websites, with all sorts of frightening claims that when you eat a Monsanto-developed crop, you're consigning yourself to a short, sickly life of gastrointestinal (or just general) agony. Cancer, allergic reactions, liver problems, sterility, and even the unnatural modification of your genes -- these are just the claims I found on the website of the Institute for Responsible Technology, which purports to be a leading anti-GMO advocacy group. I won't go into some of the anti-Monsanto conspiracy theories you'll find bandied about on less reputable corners of the Internet.

It may not be easy to debunk all of these claims, but thanks to extensive national medical records, we can at least see how close to the mark they may strike. Since America was the earliest adopter of GMO foodstuffs, and is now the world's predominant grower and consumer of GMO crops, it should be experiencing the worst of the purported GMO health problems.

Are we more cancerous today than we were in 1996? Actually, not by a long shot: 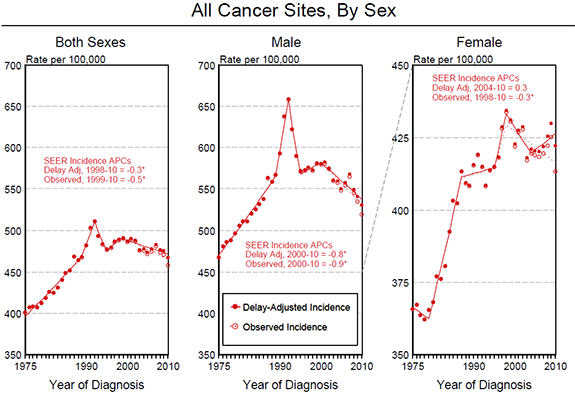 The results are even more pronounced when focusing on cancers of the stomach, colon, and rectum, which all show a persistent and significant downtrend throughout the entire tracked period across race and gender divisions. If we're eating ourselves to death, shouldn't our digestive systems be the most damaged by these Frankenfoods? Cancer statistics don't back up anti-GMO claims at all, and with more than 16 years in the food supply, you'd expect there to be a statistically significant change. The one statistically significant spike on these graphs, occurring around 1990, is often blamed on the Chernobyl disaster.

There has been an increase in death rates from chronic liver disease and cirrhosis in recent years, by about one person per 100,000 from 1999 to 2010 -- but keep in mind that these liver problems are typically alcohol-related. Simply noting a slight statistical uptick isn't enough to blame on modified crops. People might just be binge-drinking more.

The little disclaimer at the bottom reads "statistically significant trend," and the prevalence of food allergies among children increased by 18% from 1997 to 2007. That's rather notable. The average number of food-allergy-related hospital visits per year also spiked toward the end of the tracking period, from only 2,600 per year in 2000 to more than 9,500 in 2006. On its own, this may not be enough to blame on GMOs -- except for soy, none of the foodstuffs on the CDC's list of common food allergens is a known GMO crop (although wheat appears headed in that direction). The body may react to one type of food by increasing its reaction severity to other types, but the interplay between these factors is complex and not easily reduced to a simple cause-and-effect relationship.

Other noted health problems -- here I refer to a long essay by Earth Open Source, no more an impartial observer than the ISAAA (impartiality is all but impossible to come by in the GMO debate) -- include toxin contamination from the overuse of herbicides on GMOs modified for herbicide resistance, stomach lesions, and adverse immune reactions in mice, liver and kidney abnormalities in rats ... well, it goes on like this. You can read about the effects in detail at this link, beginning on page 37 (PDF opens in new window). If you can name an ailment, there's probably a study somewhere that has traced its cause to GMOs. Yet the world continues to live longer. U.S. life expectancy has increased from 76 years in 1996 to 78.6 years in 2011, and global life expectancy has increased from 66.4 to nearly 69 years in the same time period. If we're less healthy, we sure are coping with it more effectively.

Economic benefits?
There has to be a reason farmers keep using GMOs. The most obvious would be that the end product -- that is, the stuff you eventually eat -- would yield more per planting (that is, per acre), which should result in lower costs at the consumer level. To the extent that this is true, it can't be credited to the adoption of GMO seed, as yield improvements and price declines began long before Monsanto got into the seed business: 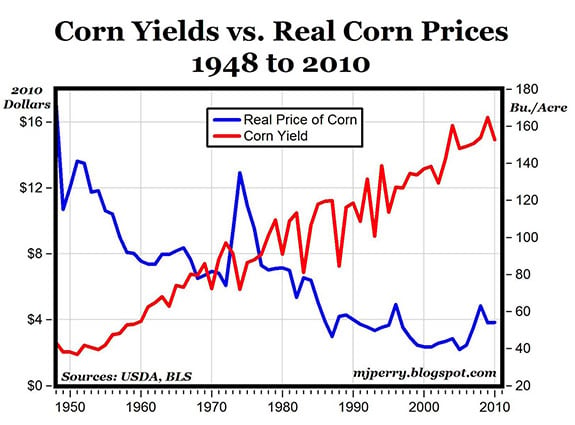 Soybean yields haven't grown quite as impressively but have still doubled on a per-acre basis over the same time frame. Cotton yields have also soared over the past several decades. GMO crops had nothing to do with it -- old-fashioned hybridization, improved production techniques and infrastructures, and the spread of these two important developments around the world created a modern agricultural revolution after the Second World War. GMO crops might be in the process of extending that revolution today, but they may not. Few processes are so simple that a simple tweaking of one element can completely explain a change in another.

GMOs can't claim to have reduced crop costs through efficiency gains, either. Since commercial introduction in 1996, two of the three major crops planted have nearly doubled in price: 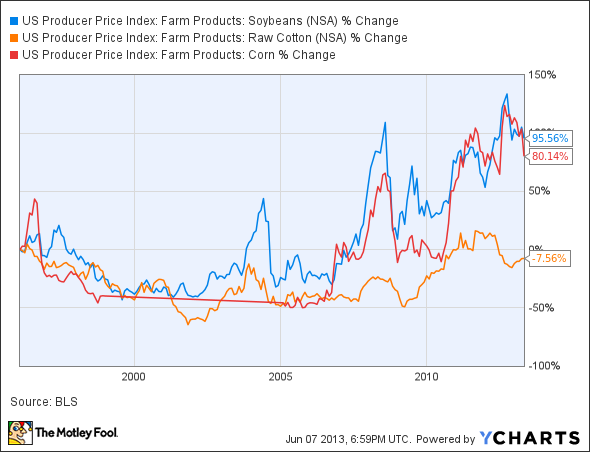 Ultimately, this is probably good for farmers, but bad for everyone else. Not only are you buying Frankenfoods that will wreck your health, but you're also paying twice as much for the privilege. Agriculture can be so cruel. (Yes, that was tongue-in-cheek.)

Monsanto itself claims that GMOs benefit farmers through increased yield, greater insect and disease protection, and drought and heat resistance. The modified crops also conserve the soil, minimize the use of herbicides, and reduce the energy used in the growing process.

I've already shown that yields have been increasing for decades, so Monsanto is at best merely continuing a long-running trend, and at worst piggybacking on other improvements to make disingenuous claims. Herbicides and fertilizers have shipped in more than 35% greater quantities this year over the volumes seen in 1996. Fertilizer, as you might expect, is one significant part of increasing crop yields. Since fertilizers are quite energy-intensive to make (many are derived from natural gas) and can be damaging to soil quality over time, this one factor tends to disprove a number of Monsanto's claims: 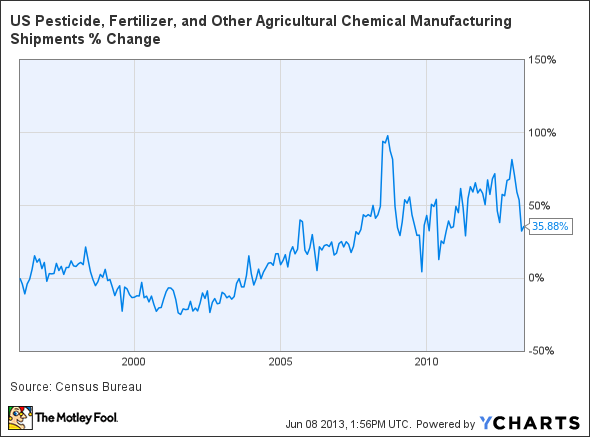 US Pesticide, Fertilizer, and Other Agricultural Chemical Manufacturing Shipments data by YCharts.

The increased use of herbicide designed to work with GMOs (and vice versa) appears to be creating strains of "superweeds" that actively resist the chemicals. Nature tends not to sit idly by while scientists try to pound it into submission. The long-term consequences of an arms race between chemical-cum-GMO producers and the invasive species they want to push out of farm fields could very possibly result in damages beyond the circumstantial ones I've already highlighted.

The only real claim that I can't disprove (or at least weigh down with caveats) is that of drought and heat resistance, mostly because it's not easy to find data on the claim in either direction. Reducing water use is no small feat in a world quite obviously enduring a period of abnormal heat and drought. However, this alone can't answer for the fact that something should be done about widespread droughts beyond the creation of GMOs that drink just a little bit less water -- particularly if these GMOs result in the indirect use of more water by herbicide-resistant weeds.

How do you solve a problem like Monsanto?
It's tempting to reduce complex issues into outraged sound bites, like "GMOs are killing people!" or "GMOs are feeding the world!" The truth, as always, isn't quite so easy.

The threat of tainted food -- whether by chemicals or through genetic manipulation -- is a cause that arouses outrage at a pitch few other causes will ever muster. The threat of a shadowy corporation with its fingers buried in the heart of our food supply only heightens this outrage, and Monsanto's heavy-handed efforts at control have done nothing to soften its public image. However, the science of GMOs has been carried out in a highly ideological way on both sides, which doesn't help when all you want is the truth.

It seems that GMOs will inevitably become a larger part of our food supply, because the corporate motivator in the United States has proved to be stronger than the citizen motivator in recent years. A few protests won't change that. It will take concerted, long-running national efforts to change diets and attitudes before Monsanto and its peers are forced to loosen their grip on American farmlands. If you choose to be one of the people on the vanguard of that effort, make sure that you understand the science as it is, and not as you'd like it to be.

Are we less healthy today than we were two decades ago? It's possible, even though most of the statistics don't show that. Is it all Monsanto's fault? Probably not.

Why Is Monsanto the Most Hated Company in the World? @themotleyfool #stocks $MON $DOW $DD Next Article
Current