Everybody seems to be rooting against GameStop (NYSE:GME). The video-game retailer is clutching a business model that game publishers hate. After all, they see none of the profits when GameStop sells a used copy of one of their titles.

Console makers are gunning for GameStop, too, with Microsoft (NASDAQ:MSFT) and its Xbox One leading the way in pushing to kill the need for video-game discs. And the bearish sentiment against GameStop is through the roof. The stock is one of the market's most hated, notching short interest of almost 30%.

Yet investors in GameStop's shares have a simple answer to all of that negativity: "scoreboard." 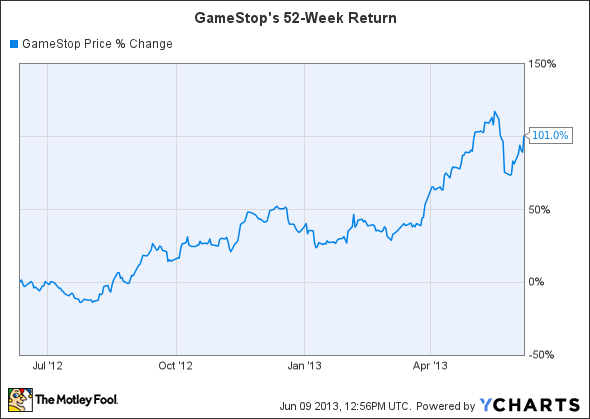 What, me worry?
GameStop can thank the lifting of uncertainty around the next-generation consoles for much of that gain. Rumors have been swirling that Microsoft and Sony (NYSE:SONY) aimed to blockade used games from their new systems. Considering that GameStop made $1.17 billion in profits from the resale of used games last year, a move like that could be lethal to its business.

However, that completely digital future looks to be at least one console generation away. Microsoft announced last week that it will allow for the resale and trade-in of games on the Xbox One, and GameStop's shares rallied 6% after the news.

But GameStop's good fortune hasn't all been at the hands of other companies. It has made some shareholder-friendly moves lately that the market loves. GameStop used much of its ample cash flow to initiate -- and then raise -- a dividend. The company also spends heavily on stock buybacks. It shrank its outstanding share count by 25 million, or 17%, in just the past two years.

And GameStop has also made solid progress in diversifying its business. The company's "other" sales category, which includes digital sales, used electronics, and non-game retail, grew to $1.5 billion last year, to nearly 20% of its total revenue. It is still heavily levered to physical video game retail, but that's far from the only card that GameStop has to play.

The future is cloudy
So what's the future look like for this company? Just as rocky as its recent past.

GameStop is heading into a dangerous period in the console cycle. The company typically books its worst profit margins in the months right after new console introductions. That's a tough time because new hardware sales are a low-profit business. And worse yet, because all the games are brand-new, it will be a while before a vibrant used game market develops.

Sony could also throw a curveball at this week's E3 conference regarding how it plans to handle used games on its own system. It's unlikely that Sony will go further than Microsoft in policing trade-ins, but the company could still announce policies that would whack GameStop's business.

But assuming Sony follows Microsoft's lead, GameStop can look forward to delivering the latest generation of game consoles to a hungry base of gamers, and then reaping profits down the line as used games start trading heavily. Shares could even continue their climb in the face of all of GameStop's worries. Considering that the stock is valued at less than 10 times annual cash flow, further gains aren't impossible from here.