Please ensure Javascript is enabled for purposes of website accessibility
Log In Help Join The Motley Fool
Free Article Join Over 1 Million Premium Members And Get More In-Depth Stock Guidance and Research
By Asit Sharma - Jun 10, 2013 at 11:38AM

The two fast-food giants employ very different strategies in one of the world's most promising consumer markets.

Following his recent presentation at Sanford Bernstein's 2013 Strategic Decisions Conference in New York, McDonald's (MCD -1.70%)CEO Donald Thompson was asked about his company's strategy in China, given that it lags behind competitor Yum! Brands (YUM -2.37%) in both revenue and number of outlets in the country. Thompson was suffering from a cold on the day of the conference, but his breakdown of the question was one of the more coherent and emphatic position points you'll hear from a Fortune 500 CEO. Thompson outlined clear strategic and philosophical differences with Yum!'s approach to entering China's massive consumer market, and his answer is worth reading in its entirety:

Today it represents 3% of our operating income. Will that grow in time? Yes, it will grow in time, but we don't have all of our eggs in one basket. So we'll continue to grow China. We'll grow it at a pace that allows us to franchise effectively. We'll grow it at a pace that allows us to continue to seek out sites that we can place drive-throughs in, because that's the best long-term returns. And we'll do it in a way that grows along with the automotive growth in China. We'll start to grow outside of the core cities, which we['ve] begun to do, and we'll establish development licensees even stronger, which we've already begun to do. So our strategy in China is a solid strategy, but it is part of a broader strategy. It's not just about China.

To understand why Thompson shaped his answer the way he did, it helps to review the impetus behind the question: Yum!'s success in China. Yum! has famously staked its future on China, and today, it derives more than 50% of its revenues and 44% of its pre-tax operating profits from the country. This reliance on a single, huge market can garner tremendous rewards, but the pendulum swings both ways: In the first quarter of 2013, operating profits in the company's China division declined 41%, as dreadful publicity surrounding its KFC restaurants' supply chain scared Chinese consumers away.

Yum!'s three-layer China concentration
Just how concentrated is Yum!'s bet? Yum! is "all in" in China in three ways: First, it has staked its future on an overall revenue concentration in the country, as mentioned earlier. Second, within that concentration, it is focused primarily on the Chinese appetite for fried-chicken menu items at its KFC restaurants. The company wants to exploit the Chinese appetite for its fried chicken while it is still a novelty, and hopes to gain loyal, long-term customers in the process.

Lastly, the company is refranchising (selling company stores to franchisees) aggressively around the world, but in mainland China, it is building its own restaurants. When a company operates its own stores, and those stores outnumber franchises, healthy profits can follow. But the extent to which Yum! has concentrated its business model in China on company locations is surprising. Between 2010 and 2012, Yum! added a net of 1,319 company-owned stores in China. But total worldwide company-owned stores increased by only 307 during the same period, as China additions were offset by refranchising and company-owned-store closures in the rest of the world. As of the end of 2012, 79% of the company's locations in China were company-owned. So not only is Yum! incurring greater revenue risk in China, ultimately it is reshaping the nature of its operating profits, and dialing up both the potential reward and the risk on its bottom line.

McDonald's game plan is more measured
McDonald's has taken a much more balanced approach to China, as Thompson pointed out. With just 3% of operating income generated in the country, McDonald's has a different set of objectives than Yum!. Not that McDonald's is neglecting China: The company considers the country to be one of eight "major markets" that comprise over 70% of the company's revenues. But almost every facet of McDonald's approach differs from Yum!'s. McDonald's will grow in a mix that supports its current balance of franchised versus owned stores. It won't ignore dynamic markets such as South Korea and Malaysia, which, like China, should also see phenomenal growth but will provide portfolio diversification -- something Yum! is apparently not concerned with. McDonald's practices portfolio allocation reminiscent of a cautious mutual fund manager when it expands in developing markets, while Yum! is doubling down in China, a concentration strategy that brings to mind the tactics of large hedge funds. McDonald's possesses a proven restaurant revenue model that squeezes optimum revenue out of drive-through traffic. Yum! has expanded KFCs primarily in malls.

Which strategy wins in the long run?
At this point, it's early to tell which strategy will bear out over time. If you're a fan of McDonald's, you need simply to look at the company's steady growth and clockwork earnings since the 1970s, and it becomes apparent that Thompson's hunt for revenue in developing markets should naturally be diversified and methodical, just as he says. If you're positive on Yum!, the following chart may indicate that near-term setbacks are a risk worth taking. Take a peek at the percentage increase in income from continuing operations over the last five years between the two companies: 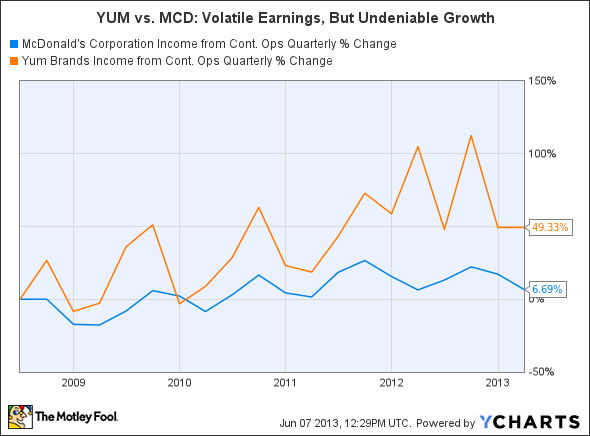 One can't deny the upside of Yum! throwing so much of its resources into China. But for all that momentum, McDonald's investors can hardly complain: Due to a significant dividend, and the company's steady earnings per share, McDonald's total-return mark over the last five years is not very far behind Yum!'s, with much less risk: 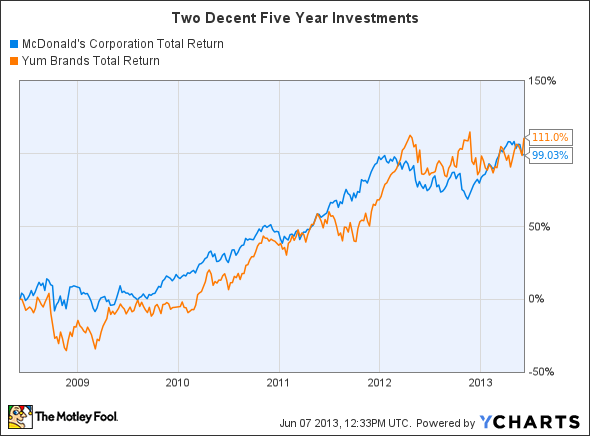 How to choose
So what to make of these differences? Both companies present intriguing investment opportunities. Whether you weight one more heavily in your portfolio depends on how you align philosophically with each of these visions. Personally, I believe McDonald's presents a safer investment from a risk/reward perspective. With reinvested dividends, McDonald's stock has been a total-return monster over the last 20 years, returning almost 1,000 percent. But for those who possess a fair amount of risk appetite and can hold the stock for several years, Yum! may be worthy of attention. A final investing note: If you buy Yum!, you may want to check the "Restaurant Unit Activity" tables that the company publishes in each quarterly and annual report. Today, over 62% of company-owned stores are found in China. Every percentage point above this in the future will represent potential reward, but also potential gray hairs for buyers of Yum! stock.