The federal government has taxed tobacco products since 1794, although the first state tax wasn't implemented until Iowa passed a bill in 1921. Today, every state in the union as well as the District of Columbia, Puerto Rico, Guam, and Northern Marianas institute a tax on cigarettes. This is likely no surprise. If you have tried to buy a pack of cigarettes lately, then you know it is a pricey purchase. Unfortunately for smokers, cigarettes don't appear to be getting cheaper anytime soon.

Since 2002, states and territories have increased cigarette tax rates at least 105 times. Here's where they stand for summer 2013. These are in addition to the $1.01 federal tax tacked on per pack -- up from just $0.39 in 2009 -- not to mention city taxes in several metropolitan areas. New York City and Chicago residents will be paying $5.85 and $5.66, respectively, per pack in state and local taxes this summer. You may be wondering if all of these measures actually amount to a reduction in smoking or enhanced public health -- presumably the targeted end result -- or are just an easy revenue source for Uncle Sam. Before we question the effectiveness of cigarette taxes, let's take a look at what is at stake.

Health effects of smoking
There is really nothing novel here. We are taught from an early age that smoking cigarettes can cause serious health problems. The Center for Disease Control hits home with these six statistics.

Given the health and economic consequences of smoking, it is easy to see why federal, state, and local governments would set out to curb tobacco consumption. But do cigarette taxes really work?

Survey says...
The surgeon general releases annual reports on tobacco use every few years. In the 2000 report, the office maintained that a 10% increase in cigarette prices results in a 3%-5% reduction in consumption. This was backed up by an overall decline in smoking from 2005-2011 across several groups, including a 22.5% fall among those ages 18 to 24 years old. A separate study conducted by the New York Department of Health in 2011 determined that smoking rates in the state -- where consumers face the stiffest taxes in the nation -- fell 20% from 2003-2004 to 2009-2010.

The evidence suggests that cigarette taxes do in fact curb consumption.

However, you would be hard-pressed to find any connection between falling smoking prevalence and share performance at Reynolds American (NYSE:RAI), Lorriland (NYSE:LO.DL), Phillip Morris (NYSE:PM), and Altria (NYSE:MO). These companies are some of the best performers in the past decade. In fact, Altria is the best-performing stock of the last half-century! 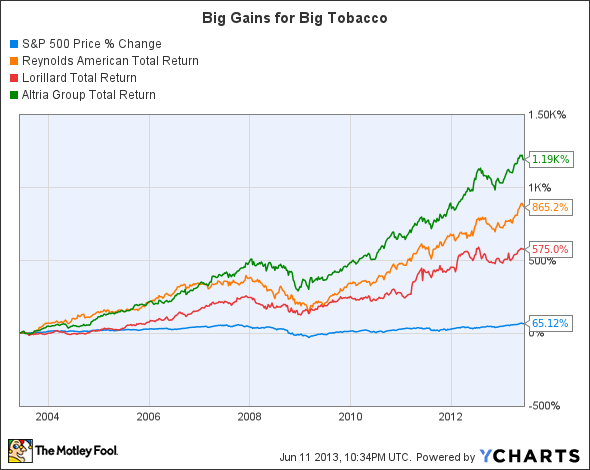 How is that possible? Tobacco consumption is rising rapidly in low- and middle-income countries, as noted by the World Bank. Each company has increased its presence internationally and diversified into products such as nicotine gum, electronic cigarettes, and even wine. The group has also spent billions on advertising and millions more on lobbying. I still find it interesting that, at the end of the day, no one can blame higher cigarette taxes for hampering growth.

Can cigarettes be taxed out of existence?
If high taxes are effective, then even higher taxes should be even more effective, right? Not quite. The same New York Department of Health study quoted above questions the effectiveness of increasing taxes further. While overall consumption has fallen in the state since 2004, researchers found that households with less than $25,000 of annual income saw consumption rates decline less than 10%. More worrisome is the fact that households with $30,000 of annual income that smoked spent 23.6% of earnings on cigarettes in 2011 -- more than double the 11.6% spent in 2004.

In other words, lower-income smokers are less likely to quit because of higher taxes but feel a much bigger economic pinch as a result. Consider that similar economic studies have shown that low-income households spend less than 20% of their income on food. Keep in mind that the study included the state -- and city -- with the highest tax rates. Nonetheless, policymakers may need to realize that increasing cigarette taxes from here may do more harm than good. Perhaps allocating more tax revenue toward a smoking awareness campaign geared toward low-income households would be more effective.

Foolish bottom line
Even if cigarette taxes are nearing a wall in terms of effectiveness, there is no debating that they have done a great job of curtailing tobacco consumption in the United States. Ironically, tobacco companies have thrived in the same time period that smoking rates have dropped by 20%. I am aware that differences persist, but perhaps this is proof that taxing other negative externalities -- carbon emissions, sugary foods, and the like -- won't result in the doomsday economic scenarios often hypothesized by critics. Heck, investors in energy companies may welcome a carbon tax after seeing the performance of the tobacco industry.