Jason Moser
(TMFJMo)
Author Bio
Jason A. Moser is an analyst for Motley Fool One. He finds stocks that make money and tells the world about them. He's also won a Buzzy. And an Awessie. Follow @TMFJMo

Let's rewind back to May 2012. The excitement was palpable as the world's largest social connector was going public. There was no way Facebook (NASDAQ:FB) could lose. It had already been around for a number of years and built up a base of registered users close to 1 billion strong. It was like death and taxes: a sure thing.

You know what happened
Fast-forward to today. Facebook's life as a public company has been nothing short of painful to watch. The stock is down 38% from the IPO price and it continues to face questions on how it plans to successfully monetize its mammoth user base. But it's not like these guys aren't making any money. In fact, Facebook pulled in about $5.5 billion in revenue over the last 12 months. Though compared to Google's (NASDAQ:GOOGL) $53.5 billion, that figure seems rather minuscule (keep in mind that Google's also a far more mature business). Especially when you think that Facebook shares are trading at a whopping 10.5 times sales versus Google at about 5.5 times sales. And Google's stock has certainly outperformed Facebook since the IPO, as the chart below shows: 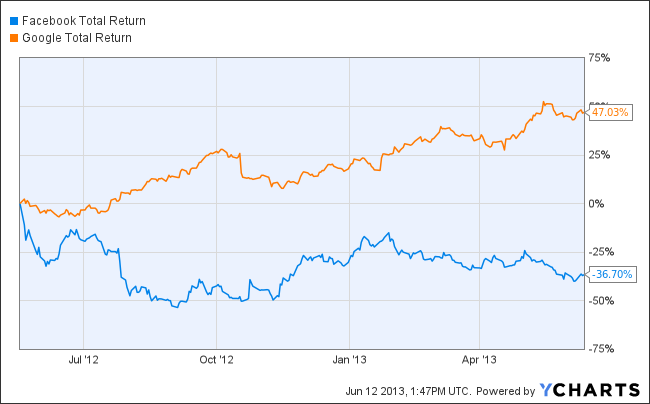 But I digress
What really grinds my gears is when I read articles like the one I read last night by The Wall Street Journal about Facebook's first annual meeting. In short, founder and CEO Mark Zuckerberg had the "pleasure" of taking questions from angry investors about the stock's performance over the past year. One investor called the stock a "disaster." Another said he invested "blindly" because he was a "huge fan." Folks, let me ask you something: If you're investing in something because you're a big fan and admit you are investing blindly, why not just plunk down a few bucks at the roulette wheel in Vegas instead? Because that's basically what you're doing: You're gambling.

Now, don't get me wrong. I'm very much in favor of stock prices going up. And I am also extremely supportive of shareholders' rights. Maybe people just need a time and a place to vent. But I'm also going to exploit episodes like this and take the opportunity to tell these people to get a clue.

I've said it a million times and I'll say it until my last breath: Our greatest advantage as investors is time. Embrace it, invest accordingly and go do something productive. If you're worried about a stock price over such a short period of time as a year then you shouldn't be investing in individual stocks at all. Just dollar-cost average in an index fund and move on. If you are truly interested in investing in individual stocks, then you need to adjust your mind-set. I think Peter Lynch put it best when he said, "Although it's easy to forget sometimes, a share is not a lottery ticket... it's part-ownership of a business."

Part-ownership of a business, indeed. When you start investing with this mind-set, you start looking at the bigger picture: How a company makes its money, what its competitive advantages are, the management team behind it all, what it will do over the coming decade to create value. These are all questions you need to ask yourself before you invest your hard-earned cash. It's Foolish (note the big "F") and it works.

Was I too harsh?
I've been as vocal a critic of Facebook as anyone. I'm not entirely convinced that it's going to be so easy to monetize its tremendous user base and consequently I've never bought shares. But I also recognize the fact that with more than 1 billion users, this company has a plethora of data and every incentive in the world to figure out how best to use it. But the bottom line is that if I ever decide to buy shares of Facebook, it's going to be because I've done my homework and because it's a business that I am content to be an owner of for the next three to five years -- or even longer. I will use my greatest advantage -- time -- and then move forward. I recommend these disgruntled Facebook shareholders do the same.