There are several reasons to be optimistic about America's energy prospects: Oil and gas production is climbing, alternative energy use is skyrocketing, and efficiency gains are giving us more bang for our buck. Yet despite all this good news on U.S. shores, we cannot forget that the U.S. is only one piece of the global energy puzzle. There are a lot of signs around the world that $5 gas is very possible, and more likely than many of us would like to think.

Demand is falling... here
The demand for oil across the U.S. and Europe has been either flat or declining for the past decade, and demand for oil from OECD countries is less than it was 15 years ago. Certainly these kinds of numbers should be encouraging, right? 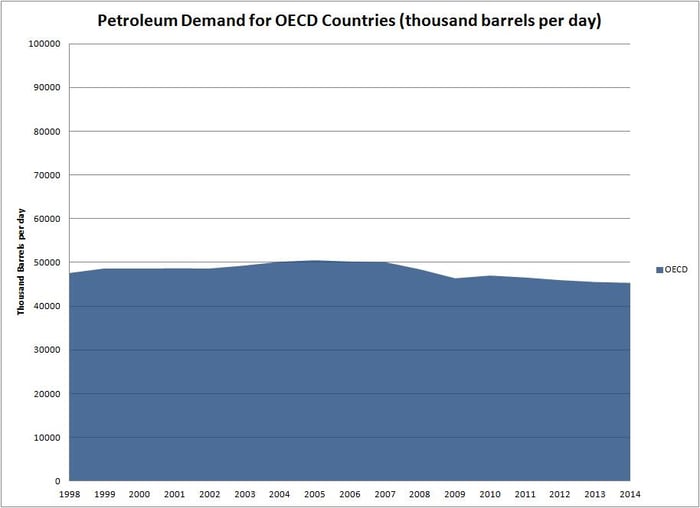 The only problem is, it only tells half the story. 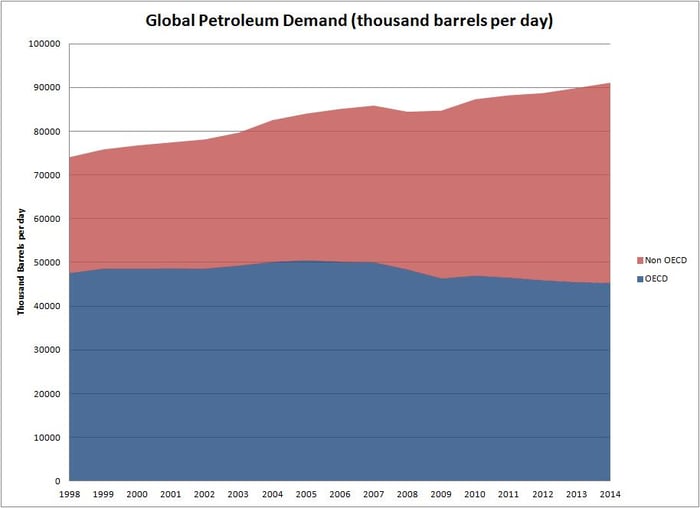 Based on projections, next year it will be less than half the story.

By 2014, the petroleum demand of countries not in the OECD is expected to surpass that of OECD members, and is expected to be double that of OECD countries by 2030, according to the International Association for Energy Economics. The world will still struggle to keep up with petroleum demand, and the costs to find these new sources will constantly go up because the costs to extract these new sources is much higher than what we were used to.

Between 2011 and 2012, the average reserve replacement cost for the top 50 exploration and production companies listed on U.S. exchanges nearly doubled to $32.72 per barrel. Even worse, integrated majors Royal Dutch Shell (NYSE:RDS.A) and BP (NYSE:BP) saw reserve replacement costs balloon to $41.76 and $72.03 per barrel, respectively. Companies like these two are big players in the global marketplace and their actions can have major implications on global markets. When costs get so high, prices will follow suit because companies will need to recover their costs.

The oil market is still pretty inelastic
I cannot deny that the appeal of alternatives to gasoline vehicles is getting stronger everyday, but we need to keep this in context. While many people may be more aggressive in pursuing an alternative to gas as prices climb, the infrastructure to make that a reality just isn't in place for it to happen yet.

Let's take, for example, natural gas vehicles. Clean Energy Fuels (NASDAQ:CLNE), the nation's largest fueling station network, has about 360 stations. The problem, though, is that just isn't enough to make it convenient enough for every day drivers to make the switch. According to the Petroleum Marketers Association of America, the point at which natural gas vehicles can be adopted on a large scale is about 53,000 fueling stations, so we are about 2.2% to the point where you or I could seriously consider a natural gas vehicle without the inconvenience of driving around for half the day to find a fueling station.

The same could be said for electric vehicles as well. I cannot deny that electric vehicle sales are growing fast, but they still have a long way to go before electrics start taking a serious chunk out of other vehicle sales. Year to date, Tesla Motors (NASDAQ:TSLA) has sold about 7,506 Model S vehicles. When you stack that up against cars in its class (Mercedes S-Class, Audi A8, BMW 7 series), it outperformed each of them. In the grand scheme, though, all electric vehicle sales represent less than 1% of the more than 6 million vehicles sold in the U.S. so far this year. It would take a monumental effort from automakers to convert or expand their manufacturing processes to accommodate a big bump in electric vehicle sales.

Pundits always get in trouble by saying something will never happen, but technology always improves. If anything I am very optimistic about the long-term prospects of alternative fuel transportation. Based on where we are today, though, it will still be quite some time before we can say "no thanks" to high gas prices.

Supply can turn at at the drop of a hat, and it's not a good thing
The U.S. boom in oil production has made us pretty bold in our proclamations about the global energy market, and to a certain degree this boom will profoundly affect oil supplies around the world and will take away some of OPECs influence on oil prices. The key word in that previous sentence, though, is "some".  OPEC representatives have gone on record lately to say that they intend to maintain a 30 million barrel per day production level in order to keep prices at current levels. For quite a while longer, we will have to live with the fact that OPEC will still be taking the big piece of chicken at the dinner table.

As much as we would like to see other nations develop the drilling technology that has flourished in the U.S., it's estimated that hydraulic fracturing and horizontal drilling may not be in widespread use outside the U.S. for another 10-15 years. This means that several other large oil markets, such as Europe and China, will be at the mercy of OPEC's pricing, and will pay a hefty premium because of it.

That's OK, we can produce our own oil so we don't need to worry about prices overseas, right? Not really. As much as we would like to think that U.S. oil companies are going to shield us from expensive prices overseas, it is more likely that they are salivating at the idea of selling to those markets. In the previous quarter, the trio of large independent refiners with a presence in the Gulf of Mexico – Valero (NYSE:VLO), Phillips 66 (NYSE:PSX), and Marathon Petroleum (NYSE:MPC) – combined to export 785,000 barrels of gasoline and diesel per day to markets in Europe and South America. Each of these companies' execs stated in their recent conference calls that they are doing this because the prices there are much more attractive, and each one has plans to expand export capacity to take advantage of these high prices. As long as someone is paying a higher price for gas overseas, we will likely be stuck with high prices as well.

What a Fool believes
As much as I would like to believe that gas prices have hit the ceiling, there is too much going on in the global markets to think that we will never get there. In the long term, alternative fuels will start taking bigger bites out of gas vehicles and the U.S. will be able to supply itself with more oil, but for the time being we will still be affected by the whims of the global oil market. This means that $5 gas is well within the realm of possibility.