The U.S. coal industry continues to struggle with falling demand domestically, and low prices for exports. New emissions regulations have caused the closure of hundreds of coal plants in the last few years, and the low price of natural gas has been a death knell for companies like Patriot Coal, which couldn't find low cost supply.

Long-term, there's nothing that's going to stop the trend of falling consumption domestically. It may ebb and flow from month to month, but we have plenty of natural gas, and renewable alternatives are growing like a weed. 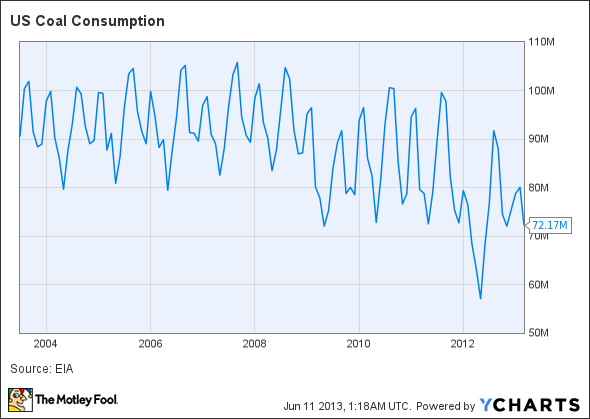 Most investors hope that exports will make up for the loss of domestic consumption. The problem is that exports aren't growing nearly as quickly as consumption is falling.

Yes, we're seeing a resurgence in demand in 2013, but the long-term trends are working against coal. Eighty-two percent of all new generation built in the first quarter was renewable energy, and this will be the biggest obstacle to coal's future, now that renewable sources are lowering costs. Even the EIA is expecting very little new generation to hit the grid in the next three decades. 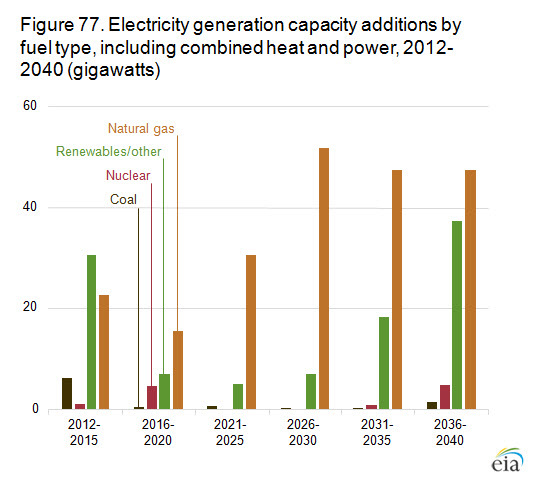 According to the EIA, there's a good reason new coal plants aren't being built. It's simply too costly to build them compared to other energy sources. 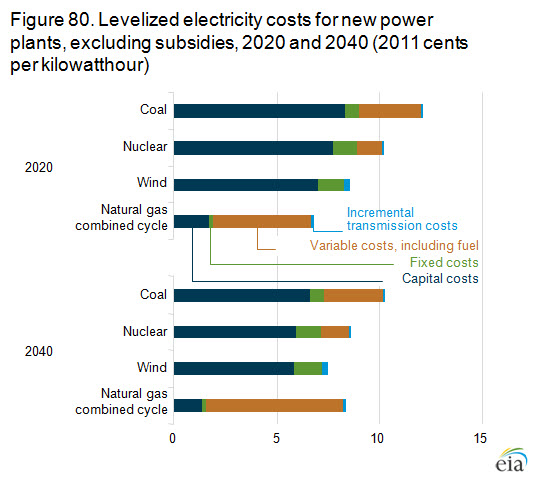 Natural gas is the biggest power source coal needs to worry about short-term domestically, and it's one energy source we have an abundance of. Longer term, renewables will play an expanding role and, as they do, coal will fall further into the background.

Overseas hope
The big hope is that coal exports will grow, and companies will be able to replace U.S. demand with demand from China and India. Arch Coal (OTC:ACIIQ) hopes to quadruple exports by 2020 after inking a deal to ship up to 10-million tons to the Gulf Coast annually. Alpha Natural Resources (OTC:ANRZQ) is expecting to double exports this year as U.S. demand falters. Finally, Peabody Energy (OTC:BTUU.Q) has an agreement with Kinder Morgan Energy Partners to help increase the company's export capacity by 5 million to 7 million tons starting next year.

All of this export hope rides on the assumption that demand will continue to increase in India and China. Short term, that may be true, but China is likely going to be the biggest wind and solar installer in the world this year, and it has never liked a long-term import strategy. According to the China Coal Industry Association, Chinese coal consumption only increased 1.5% in the first quarter, and the country's five-year energy plan aims to reduce coal electricity from 79% of production, to 65% by 2015.

The chairman of Coal India -- the world's largest coal producer and supplier of 90% of India's coal -- recently said that his company would only need 5-6 million metric tons of coal imports this year, from a previous view of 35-million metric tons. In an incredibly ironic move, the company is also installing solar energy to provide power for its facilities, and is considering distributing  solar, as well. There's an abundance of sun in India and, with a shaky electricity infrastructure, it's solar power, not coal, that will be the country's future.

Coal on the wrong side of the future
The coal industry is simply on the wrong side of history. Coal powered the country for a century, and helped fuel growth in emerging markets, but demand will fall in the future, and investors will be left with scraps, as companies fall. Investors would be wise to stick with emerging markets like shale drilling, ultra-deepwater drilling, and renewable energy. These are the energy sources of the future, and coal is the energy of the past.

A better way to play energy