As China transforms from an emerging market to an economic leader, the era of outsourcing to this nation is coming to an end.

"Made in China." It's a slogan emblematic of many things -- of cheap labor, of the loss of U.S. manufacturing jobs to lower-wage nations, of China's rapid ascent to the ranks of the largest economies on Earth. China's been blamed for the loss of many American jobs over the recent past, and data abounds to back up that claim. Washington's Economic Policy Institute projects that more than 2 million manufacturing jobs and 2.7 million total jobs fled the U.S. for China between 2001 and 2011, fueling a renaissance in cheap products in American stores but also sending America's trade deficit skyrocketing.

China's jobs boom may be short-lived. Minimum wages are rising, workers are demanding higher labor standards, and a rising middle class has turned from cheap manufacturing jobs to employment in the service sector. The IMF believes that China will experience a worker shortage of more than 100 million jobs by 2040, something unthinkable during the peak of the "Made in China" era. 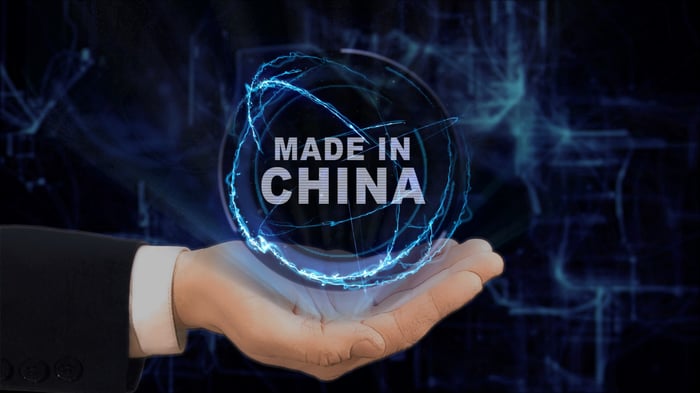 Technology has replaced some of China's cheap labor, but many more jobs and companies have outsourced from the nation, once the very king of outsourcing itself. Where are these jobs and businesses going? Let's look at the three nations that stand to gain the most business from the dramatic shift in China's job market.

Vietnam: Asia's new low-cost king
Unheralded Vietnam won't make anyone's list of the world's most powerful economies. The small Southeast Asian nation's surrounded on one side by China and on the other by India -- two of the world's biggest emerging markets that also compete against the likes of Japan, South Korea, and Indonesia for dominance in the Asian economic landscape. That's a tough geographic nut to crack, but Vietnam's capitalized on China's rising middle class and labor demands by taking a page from its larger neighbor's playbook.

Vietnam's GDP has grown at a sharp clip, and while its slowdown this year leaves it behind China's 7.75% projected economic growth, Vietnam still is on pace for around 5% GDP growth this year. Meanwhile, high inflation hasn't translated over to the country's wages, keeping the labor market cheap and offering a huge advantage over China's exploding labor situation. Athletics-product maker Nike (NKE 0.85%) is just one of many companies taking advantage of Vietnam's cheaper labor at China's expense: Vietnam surpassed China as Nike's top footwear supplier in 2010, and the country supplied around 41% of Nike's total footwear last year, nine percentage points more than China.

Major electronics companies such as Samsung and Jabil Circuit (JBL 1.08%), which is planning on tripling its workforce in its factory in Ho Chi Minh City over the next two years and has cited China's rising costs as a primary driver of the move away from the nation, have seized the opportunity to slash costs even with Vietnam still lagging behind China in terms of productivity. Even sectors such as health care have gotten involved, as pharmaceutical company Sanofi (SNY -3.94%) this year announced plans to invest $75 million in a Vietnamese facility to serve as an emerging-markets hub and entrench its leadership position in Southeast Asia.

Vietnam faces challenges that could see its jobs fleeing to even lower-cost competitors in coming years, such as neighbors Laos and Cambodia. The country's population is aging, although it's far younger than China's aging crisis, and that high inflation will eventually catch up to it. Still, Vietnam's anchored itself as a pivotal nation in a growing Southeast Asia. For now, however, Vietnam's poised to keep benefiting off China's losses for at least the next few years as its bigger neighbor's middle class continues to shed traditional low-wage jobs.

Mexico: Cheap manufacturing a border away
No need to go all the way to Asia for a country that will benefit from China's job losses, however. Mexico's just a hop away across the border, and for U.S. companies looking to save on costs, it's a much cheaper alternative to China's rising standards.

Like Vietnam, Mexico's capitalizing on China's misfortune through cheap wages. Average wages actually are higher than in China -- 40% higher as of 2011. Mexico's manufacturing resurgence of late has been a boon for U.S. industrial giants. Strikingly, Mexico's also thrived in producing higher-quality workers recently, particularly in fields such as engineering. That's created a productivity surge in the country, and the Boston Consulting Group estimates that when productivity is accounted for, Mexico's cheap wages and worker efficiency mean that China's labor costs are actually higher.

The real key for U.S. companies? Manufacturers don't have to ship products across an entire ocean when they make goods right across the border. That offers major advantages in company supply chains and operations, and with China's singular advantage of low worker costs disappearing, Mexico looks more and more attractive by the day.

The auto industry in particular has thrived in Mexico, with exports primarily to the U.S. market. Nissan (NSANY -0.25%) is firmly embedded in Mexico, becoming the country's largest auto manufacturer by producing more than 680,000 vehicles in the nation in 2012. China's auto market may be hot for sales, but Mexico's becoming a major production hub that will siphon jobs into this growing market on the back of American sales.

Mexico faces its share of problems as well -- particularly with its rampant drug crime -- but the country's inflation has grown under control, and its proximity to the U.S. should continue its happy relationship with major American manufacturers for years to come.

The United States: Business comes home
What better a country to take jobs from China than the one that companies originally fled from to China -- the United States?

To be fair, U.S. wages are still far above what average Chinese workers can even dream of at this point. Like in Mexico, however, productivity closes the gap between these two nations. The Boston Consulting Group estimated in 2011 that when accounting for productivity, Chinese wages may rise to 69% of average U.S. wages by 2015. In 2001, China's average wages were just 36% of America's. U.S. workers frequently take on better training and use more complex and efficient tools on the job as well, making that productivity advantage all the more important for manufacturing positions -- particularly in manufacturing that requires skilled workers.

The cost of outsourcing products across the world's largest ocean rears its head again here to China's disadvantage. Consulting company AlixPartners projects that Chinese outsourcing costs for U.S. businesses could equal the cost of manufacturing in America by 2015, with the combination of rising wages and transportation and time costs. With China's middle class rising higher and growing larger by the day, a time will soon come when "Made in China" will be more expensive than "Made in America."

Chinese demand will encourage local manufacturing to some extent, but the country's title as an outsourcing king is probably over. Meanwhile, the rebound of the U.S. economy will fuel growing consumer demand across America, and higher sales at home will encourage local job growth. Chinese manufacturing starred when Chinese products could be sold cheaply to consumers; take away that advantage, and there's no reason not to keep jobs close by, where companies can keep an easier handle on them in a nation with a stronger legal framework and a heavier emphasis on intellectual-property rights.

Cheap Chinese goods no more
Consumers will still demand cheap products, and companies will still find ways to keep labor costs as low as possible. China's old strategy of courting wage-sensitive manufacturers and rising behind low wages is at an end, however. The nation's rising middle class and bevy of economic problems on the horizon will necessitate a shift in China's economic reality that will have the jobs that have long made up the country's identity packing up and heading for a new home. Whether that's in even lower-wage areas such as Vietnam or nations that offer higher productivity and less logistical costs, such as the U.S. and Mexico, change is in the air.

The heyday of "Made in China" has come and gone.

Fool contributor Dan Carroll has no position in any stocks mentioned. The Motley Fool recommends and owns shares of Nike. Try any of our Foolish newsletter services free for 30 days. We Fools don't all hold the same opinions, but we all believe that considering a diverse range of insights makes us better investors. The Motley Fool has a disclosure policy.