It's funny how quickly things change. It seems as if it was just a couple of years ago that we were worried we'd run out of oil. Now, thanks to advances in technology, we're finding that there is more technically recoverable oil than I think most of us ever dreamed was we'd find. Not only are these new discoveries keeping oil prices from spiking, but the locations of these resources also have the potential to change the balance of power in the world's oil markets.

According to new data from a massive study by the Energy Information Administration surrounding shale oil and gas, it shows that 63.2% of estimated technically recoverable shale oil reserves lie under just five countries:

That's important, because a total of 41 countries were included in the study. It was found that the shale oil in those countries represents 345 billion barrels of technically recoverable oil resources, which equates to about 10% of the total estimated recoverable crude oil resources around the globe. As the following map shows, the world's shale resources, while vast, are highly concentrated under those five countries: 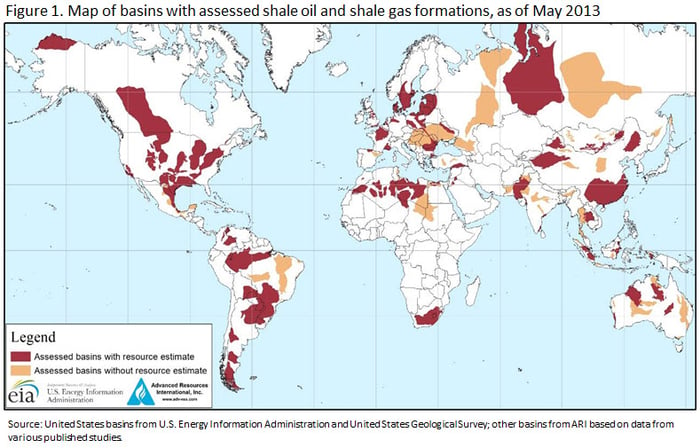 As these countries look to develop those reserves, it will have a major impact on not only world oil markets but also on the companies operating in these resource plays. Let's look at which companies stand to gain the most in each country.

Russia
Not only is Russia blessed with vast conventional oil and gas reserves, but the country also tops the list in terms of technically recoverable shale oil reserves. The problem for investors is that Russia is a notoriously tough place to invest in, especially in the oil and gas sector. Global energy giants BP (NYSE:BP) and ConocoPhillips (NYSE:COP) have both held large stakes in Russian operators in the past. However, Conoco sold down its stake in Lukoil as part of its repositioning, while BP just recently cashed out of its TNK-BP venture. Investors are probably better off watching from the sideline as Russia develops its vast shale oil reserves.

China
In fueling its fast-growing economy, China is overtaking the U.S. as the world's largest oil importer. The good news for the Chinese is that it has vast shale oil reserves that could help it join the U.S. in lessening its dependence on foreign imports. The country's producers, including Sinopec and PetroChina, have taken a unique approach to developing these reserves, as both have purchased joint venture stakes in U.S. shale basins as well as pursuing joint study agreements in China with U.S.-based producers including ConocoPhillips. These actions have enabled the country to inexpensively access our technical know-how in developing its vast reserves. Finally, one area to watch here is that Chinese producers have partnered with U.S.-based oilfield-service companies, including Halliburton (NYSE:HAL). The company is providing important software to help these operators map out the best way to tap those shale resources. It also has a terrific suite of services to offer as these resources are developed over time.

Argentina
The shale gas and oil resources in Argentina has the potential to really put the country at the forefront of the world's energy map. Not only does the country hold the fourth largest shale oil reserves, but it's also No. 2 in shale gas reserves. Investors looking to profit as the country develops these reserves could look at global giant Chevron (NYSE:CVX), which completed its first two exploratory wells into the Vaca Muerta formation last year, with another well currently being drilled. The company has three more appraisal wells planned, and given the vast reserve estimates for the country, this could be a big future driver for Chevron.

Libya
As the home of Africa's largest proven oil reserves, Libya is crucial to the world's oil markets. Unfortunately, the country also has a very unstable political environment and can be a dangerous place, as evidenced by the Benghazi attacks.Those security concerns have forced oil giant BP to begin withdrawing some of its staff, which shows you just how volatile the situation is. Until the environment stabilizes, Libya is likely to be more of a potential liability for oil producers instead of an asset.

Final Foolish thoughts
Thanks to advances in technology, the world now has more oil that is now technically recoverable, and this development has the potential to change the landscape of the world's oil markets. Of all the companies I've mentioned, the one with the potential to lead the charge is Halliburton. It's a world leader in unconventional resources, and with 72,000 employees across 80 countries, Halliburton has the boots on the ground, so to speak, to benefit from oil production growth all over the world.