I checked my tracking portfolio for the Dow Jones Industrial Average (DJINDICES:^DJI) today and found every single one of the 30 member stocks trading up. On a day like this, the longer-term travails of the Dow's elite warriors often fade into the background. Maybe that's a good thing, in a backhanded kind of way.

Let me make my point through a few examples.

Intel (NASDAQ:INTC) is among the Dow's biggest winners today following the release of some high-performance chips and positive comments from a company executive. Intel's chief technology officer, Justin Rattner, says new CEO Brian Krzanich wants the company to "move faster," trading today's perfectionism for quicker release cycles and more post-release bug fixes. This new attitude should make Intel more of a contender in the rapidly moving mobile market, which is why investors cheered the comment with their wallets.

Today the Fed reported modestly rising inflation as homebuilders broke ground on more new sites in May, all of which points to high consumer confidence and a stabilizing economy. As a result, stocks in every market sector made gains, from banks and consumer goods to telecoms and oil stocks. Sixteen of the 30 Dow members are currently trading within 10% of their respective all-time highs -- and yet Intel, which had the dual benefit of good news and a buoyant market, isn't one of them.

Intel's share price is at just a third of its dot-com-era record near $74. Its lack of mobile traction led to a 31% sell-off in just six months last year. Intel shares are coming back strong from that massive dip, but they still lag their Dow peers in both one-year and five-year time frames.

And we Intel investors can count ourselves lucky, considering the Dow's biggest long-term losers. Bank of America (NYSE:BAC) took the 2008 crisis right on the chin, has not managed to increase its damaged dividends in the five years since, and remains 76% below its all-time top despite a 58% surge in the last 52 weeks.

Aluminum producer Alcoa (NYSE:AA) has fared even worse. The stock followed Bank of America down the drain but hasn't come up for air yet. Financial services and infrastructure construction share strong ties to macroeconomic trends, but it's harder to make up for poor fundamentals when your core product is down-to-earth hardware sales. Alcoa shares are down a heartbreaking 83% since the pre-crash peak five years ago.

I'm only being a downer to remind you that big one-day market wins don't necessarily translate into a full recovery across the board. The Dow might lose today's mojo tomorrow, for all I know -- or perhaps even this afternoon. Intel's mobile push might fail. And perhaps we're misreading the economic tea leaves right now, paving the way for another roadblock in front of Alcoa and B of A.

None of this worry-wart speculation changes the fact that the markets generally rise in the long run. The American GDP has increased 20-fold since 1850 despite terrorist attacks, natural disasters, oil crises, the rise and fall of Vanilla Ice, and two world wars. Alcoa and Intel may rise again -- or die trying. A properly diversified portfolio will overcome these minor blips and create lasting wealth in the long run. What happens today really doesn't matter. The chart below will still point upward for decades and centuries to come, and the stock market largely follows suit. 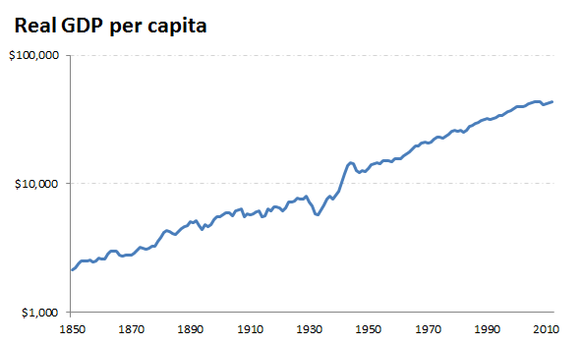