It's been bad year to be a highly paid CEO of an underperforming energy company. This past January we found out that Chesapeake Energy (OTC:CHKA.Q) co-founder Aubrey McClendon was "retiring" after philosophical differences with his board. Now, SandRidge Energy (NYSE: SD) CEO Tom Ward, also a co-founder of Chesapeake Energy, is being sent packing.

Unfortunately, for Ward, there won't be any cake served at a retirement party, for he's being let go effective immediately. It could have been worse: The company, which had hired an independent investigation firm to look into allegations of improper related-party transactions, determined that Ward's actions didn't merit him being terminated with cause. Despite that finding, this isn't the most graceful exit for the company's founder.

With cake and cookies not being an option, Ward will have to make due with his severance package. Under the terms of his employment agreement more than 6.3 million shares of previously granted restricted stock will vest, in addition to which he'll receive a lump sum payment of $53.5 million, which consists of things like unpaid vacation and bonuses. Finally, Ward will continue to receive his base salary for the next three years. When you add it all up, Ward's package is worth about $90 million, which is one of the highest exit packages the energy industry has seen, and much higher than what McClendon received from Chesapeake. While this might seem like a lot -- for those scoring at home that equates to the cost of about 30 Mississippian wells -- this is simply the cost of beginning a new chapter in the company's history.

For investors, that's really what this is all about. For far too long the focus on the company has been placed on things like Ward's pay or the company's previous missteps. Now, the focus can be on the company's assets and business operations, which are both very solid. For example, Mississippian oil production is expected to grow 64% this year while the company is in its best financial shape in years. That's one reason why the board moved quickly to tap CFO James Bennett to lead the company. The board determined that it was in SandRidge's best interest not to pursue an external search when it already possessed an ideal internal candidate.

Bennett, who has been CFO since January 2011, comes from the private equity world; he was a managing director at both West Deer Energy and GSO Capital Partners. Previous to that, his experience includes investment banking roles and prior experience as a CFO for a private equity portfolio holding. What Bennett really brings to the top spot is the financial acumen to lead a company that will need to remain financially flexible in order to continue growing.

Bennett has done an admirable job in getting the company on better financial ground since taking over as the CFO. The company's credit metrics and balance sheet are much improved, as you can see in the graphs below: 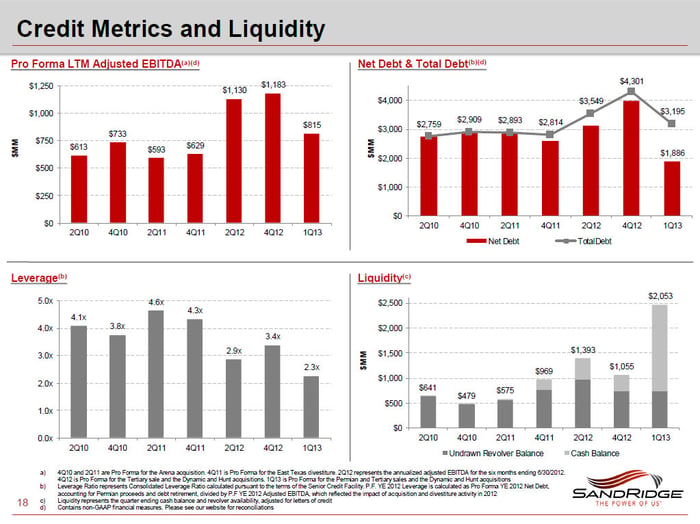 Notice that the leverage ratio is down from 4.6 times in early 2011 to just 2.3 times this year. Moreover, the company's liquidity is robust right now and more than enough to fund its drilling program through 2014. Part of this is because the company has been much less aggressive in spending capital, as evidenced by its announcement earlier this year to slash its capital budget by $700 million year over year.

That's an important thing for investors to remember, especially in light of the fact that Chesapeake, for example, still has a multi-billion-dollar hole in this year's drilling budget. SandRidge, with Bennett as CFO, made the tough choice to sell its Permian Basin assets at a time when those assets were at a premium in order to shore up its balance sheet. It's a move that could pay off in the future as SandRidge executes on its Mississippian-focused drilling program.

For investors who are either holding SandRidge or considering its stock, the company really is in a great position these days. Its financial metrics are improving, the company is growing its oil production in the Mississippian Lime and the focus of the company will no longer be on Ward's pay packages. With a cheap stock and a long runway of growth, SandRidge's future has never looked brighter.