SandRidge Energy Inc. continues to chip away at its debt.

This has been a busy week for SandRidge Energy (NYSE: SD). On the heels of an acquisition designed to plug a hole in its cash flow, SandRidge has also announced another large debt exchange. This exchange, like the prior one, sees the company sending cash and new convertible notes to some of its debt holders in exchange for $400 million of its senior notes. It's another step forward for a company that still has a few more steps to go until it's in the clear.

That being said, it is worth noting that the new convertible notes won't convert into stock until certain conditions are met. Those conditions are very similar to the company's first debt exchanged, which are laid out on the following slide. 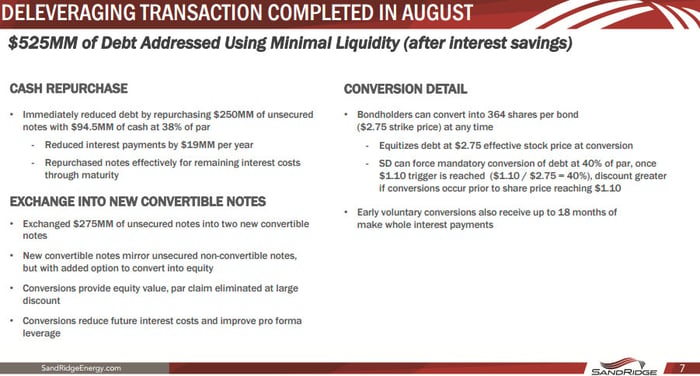 As is noted on the above slide, among the conditions are a higher stock price, which is, of course, no guarantee if oil remains weak and the company's financial situation deteriorates. Further, if the notes due convert it will lead to substantial dilution for current shareholders, although dilation at this point is better than bankruptcy.

What's next?
Earlier this year SandRidge's CEO James Bennett told investors that given the fact that oil was half of what it once was that the company would "probably want to remove $1 billion of debt from the balance sheet." With these debt exchanges the company has done just that as it has addressed nearly $1 billion in debt. However, while it has addressed a third of its legacy debt, the company did add $1.25 billion in new debt earlier this year through a second lien offering. It used that cash to pay down its credit facility and bolster its liquidity. It has since used some of that liquidity to repurchase some of its bonds at a steep discount and make the Pinon acquisition.

Having said all that, the fact remains that the company still has roughly $3.2 billion in net debt, which is a lot for a company of its size at the current oil price. In other words, more work needs to be done. In all likelihood, we haven't seen the last of the debt exchanges. Further, with the company's CEBA Midstream saltwater gathering business receiving the thumbs up from the IRS that its income qualifies as an MLP, we'll likely see the company undertake an IPO of a stake in that business. It will likely park some of its debt into the entity and use any cash it receives to repurchase more of its own debt. Finally, it wouldn't be a surprise to see the company bring on a financial partner to help it fund drilling on some of its acreage. In other words, the company still has some levers to pull as it works to make its debt more manageable.

Investor takeaway
SandRidge Energy continues to slowly chip away at its legacy debt as well as address some of its other problems. However, the company still has a lot of work to do as it wasn't built to handle the current oil price. That suggests we haven't seen the last of the company's maneuvers to address its bulky debt position.