SandRidge Energy Inc. has announced moves to improve its debt and its cash flow, but much more work lies ahead.

This past week SandRidge Energy (NYSE: SD) announced the acquisition of the Pinon Gas Gathering Company, which is a move that will plug a hole that was leaking a lot of cash flow out of the company. As such, it marks another step forward as the company works to turn itself around. However, despite the move, the company still has a number of issues to address before it's in the clear.

The prodigal returns
The acquisition of the Pinon Gas Gathering Company is a homecoming of sorts. SandRidge Energy originally sold that asset in July of 2009 for $200 million in cash. It used that cash to bolster its balance sheet, which at the time needed an infusion as the company was in the middle of a resource capture binge. However, that move, as well as many of its other resource capture related moves, quickly backfired as natural gas prices plunged. That left SandRidge holding the bag on a commitment it made as part of the Pinon deal to supply a steady stream of natural gas and carbon dioxide volume through that pipeline system.

Because natural gas prices have been so weak it made drilling in the Pinon field uneconomical, which led to declining production from that field. That also meant that SandRidge Energy had to make up the difference between its minimum volume commitment and actual volume with cash. As such, the company has had to pay about $40 million per year to meet its minimum volume commitments. That payment, however, has now been eliminated by bringing the Pinon system back into the fold.

Robbing Peter to pay Paul?
That being said, in order to reacquire the Pinon System SandRidge Energy needed to fork over $48 million in cash and $78 million of its 8.75% Senior Secured Notes due in 2020. The inclusion of the senior notes in the deal is interesting because it means that the company isn't completely eliminating its cash outflows from this deal gone bad. To put it into perspective, instead of paying a minimum volume commitment of approximately $40 million per year, it will still have to pay roughly $6.8 million in interest on the notes. While that's still a significant savings, it is something to keep in mind.

It's also worth noting that the notes SandRidge Energy is using to fund this deal are its newly issued second lien Senior Secured notes and not the Senior Unsecured notes that the company has been buying back. Back in August the company announced a major buyback and exchange of $525 million of its senior unsecured notes for cash and new convertible notes in a move that was intended to eliminate $19 million of annual interest expenses. Still, as the below slide shows SandRidge Energy has well over $3 billion in debt outstanding. 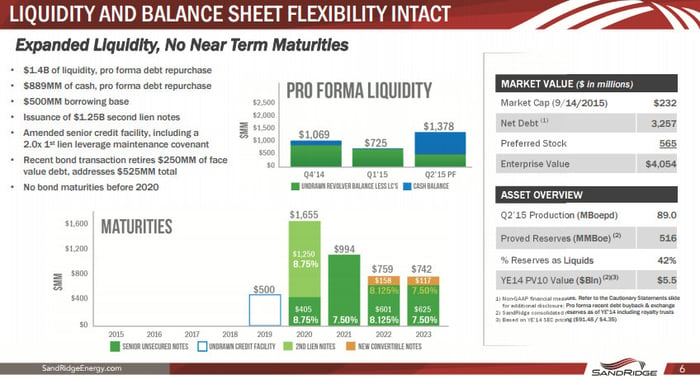 With this deal the company's net debt will actually rise by $126 million due to the $48 million cash drawdown and the additional $78 million in second lien notes. That leaves a pretty big obstacle for the company as it still has upwards of $1 billion in excess debt for current commodity prices.

Among the options on the table to bring that number down is the potential IPO of the company's CEBA Midstream saltwater gathering business. However, that business is no longer worth anywhere near the $1.15 billion SandRidge once thought it would be worth due to the fact that MLP valuations have come down substantially over the past few months as a result of interest rate worries, leverage concerns, and slowing growth. That's not to mention the fact that the company's saltwater disposal assets are located right in the middle of the fracking earthquake hot zone, which would give potential investors a lot of pause.

Investor takeaway
SandRidge Energy plugged a pretty big cash flow hole by reacquiring its Pinon system. However, in plugging that one hole, it opened up another one on its balance sheet. The company still has a lot of work to do to address that problem as one of its primary options is looking less and less likely of having the desired impact on debt reduction due to some structural changes in the market place. In other words, SandRidge Energy isn't out of the woods just yet.