There have been rumblings in the past that fracking causes earthquakes. However, the issue became more than just some rumbles after the StatesFirst intuitive, a group of seismologists, academics, industry experts, and state officials, studied the rise of earthquakes in and around areas where hydraulic fracturing occurred and recently issued a new 150-page report. That report noted a link not from the fracking itself -- which consists of pumping water, sand, and chemicals under intense pressure underground to create fractures in tight rock formation to unlock oil and gas -- but instead the from the wastewater disposal wells.

What causes fracking earthquakes?
Disposal wells are used to dispose of the mix of water and drilling fluids from fracking, as well as the brackish water that comes up along with oil and gas during production. That mixture, known also as brine, needs to be disposed or recycled, and the primary method of disposal is to pump that mixture into a well drilled into another formation deep underground, were it can be secured away from freshwater sources.

What the report found was that most of these disposal wells don't pose a hazard for "induced seismicity," or man-made earthquakes. However, it still noted that "under some geologic and reservoir conditions a limited number of injection wells have been determined to be responsible for induced earthquakes with felt levels of ground shaking." This finding led the report to conclude that "frequency of seismic events that appear linked to underground inject ion of fluids has increased," because more disposal wells under those less-than-ideal geologic and reservoir conditions are being used.

Why fracking earthquakes are on the rise
While oil and gas companies have been hydraulically fracturing for more than 60 years, the process has really taken off in recent years, after it was combined with horizontal drilling. That combination has proven to be a powerful one, turning the U.S. into an oil- and gas-producing giant. As the following chart shows, the dramatic uptick in U.S. production started in the early part of this decade, when horizontal drilling was added to the hydraulic fracturing mix. 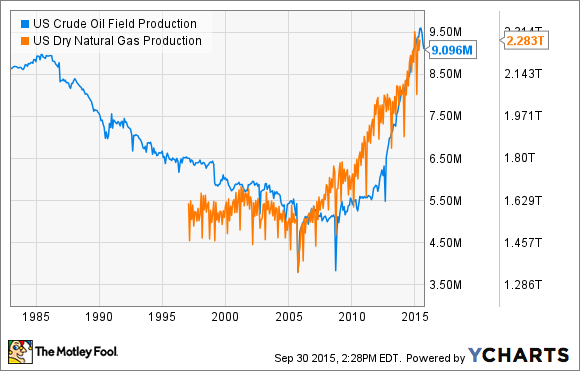 However, at the same time there has been an equally rapid rise in earthquakes, particularly in the central part of the country, where the bulk of the fracking is done: 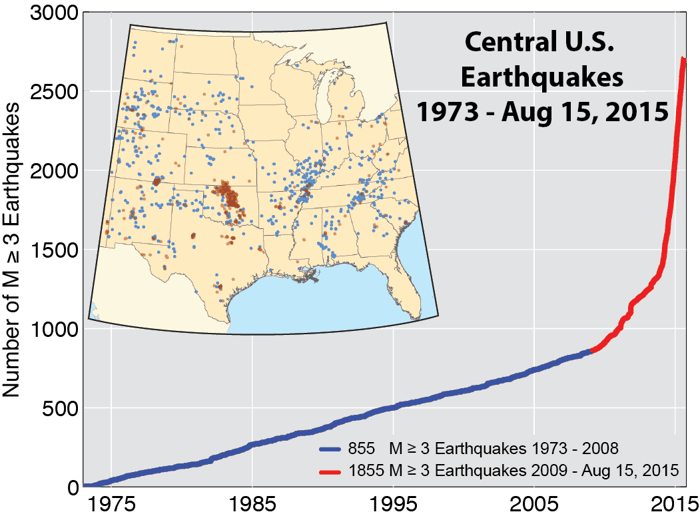 According to the U.S. Geological Survey, from 1973 through 2008, the central and eastern parts of the U.S. averaged about 21 earthquakes of a magnitude 3.0 and higher. That rate, however, surged to an average of 99 per year from 2009 to 2013. Meanwhile, last year there were 659 earthquakes of magnitude 3.0 or greater. Even more worrisome is that larger, more damaging quakes of a magnitude greater than 5 have been recorded in areas where a lot of drilling has taken place.

While the link is growing clearer between some disposal wells and earthquakes, a solution to the problem of increased seismic activity isn't on the horizon. That was the primary conclusion of the FirstStates initiative, which said that a "one size fits all" approach to fracking earthquakes wouldn't work because of the "significant variability in local geology and surface conditions, including such factors as population, building conditions, infrastructure, critical facilities, and seismic monitoring capabilities." For example, in some regions in Kansas and Oklahoma oil and gas drilling wouldn't be economically viable without disposal wells since so much brackish water comes up along with the oil and gas because of the nature of the reservoir. So to put limits on disposal wells in this region could effectively end production for many companies, since they don't have any other economic options for the water. Trucking it to a recycling facility would be too expensive. In other words, while it's now a known problem, there isn't an easy solution.

The risk of the big one looms over oil companies
Fracking earthquakes are growing not only in frequency, but also in magnitude. That's a growing concern, as some quakes are starting to cause more than a little rumbling. For example, a quake that struck in Oklahoma buckled a road and is said to have damaged some homes and caused injuries. That's a big concern for oil and gas companies, especially in light of that state's Supreme Court ruling, which said that citizens can sue fracking companies for earthquake damages. Suffice it to say a more significant quake in the future could cause real harm, not just to those affected by a quake, but also to oil and gas producers as wave of lawsuits after a major quake could have a big impact on their bottom line.