Some of the data didn't really tell us anything new. New unemployment claims fell by 9,000 to 346,000. The four-week moving average of new unemployment claims dropped by 2,750 to 345,750. New unemployment claims have averaged 350,000 this year, down from last year's 360,000 to 370,000, signaling a slowly strengthening employment market. Second, the Bureau of Economic Analysis' Personal Income and Outlays report showed that consumer spending grew slowly while personal income rose by a higher amount. After U.S. GDP was revised lower yesterday due to lower consumer spending, this comes as no surprise. The housing market was strong in May, as evidenced by numerous reports so far this month. The big question on investors' minds is whether the housing market will stay strong now that mortgage rates jumped this past month. The below chart is current as of last week but shows the start of the spike. The current 30-year fixed-rate mortgage rate in the U.S. is 4.57%. 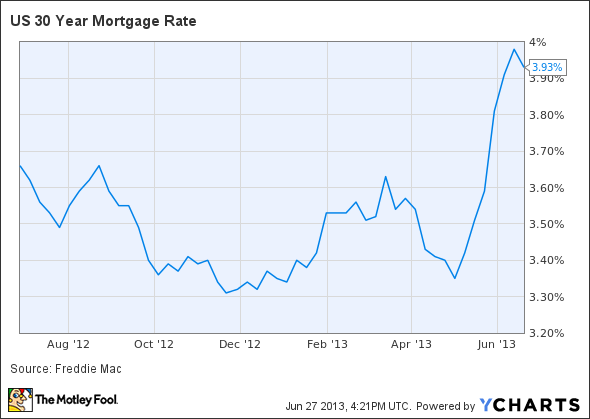 Meanwhile, the personal consumer expenditures price index is the measure of inflation favored by the Federal Reserve, and it came to 1.31% for the past year. The Fed has said it will not raise rates until inflation rises to between 2% and 2.5%.

Today's Dow leader
Today's Dow leader is Boeing (NYSE:BA), up 2.1%. Today Boeing delivered British Airways its first 787 Dreamliner. The company has come a long way since January, when the FAA grounded the Dreamliner due to problems with its lithium batteries. Now that this problem is behind, it Boeing has been able to resume deliveries and is set to reap the rewards of its investment in the new jetliner. Boeing was also yesterday's Dow leader after competitor Bombardier ran into issues with its new CSeries Jet, which competes with Boeing's 737.