This was the pivotal quarter for BlackBerry (NYSE:BB), as it was the first full quarter that BlackBerry 10 devices were on sale. Heading into this morning's earnings release, Street analysts were staunchly divided on how the Canadian smartphone maker would fare.

There is no consensus

Jefferies analyst Peter Misek, who rates BlackBerry a buy with a $22 price target, had been predicting a blowout and was modeling for $4.1 billion in revenue and earnings per share of $0.50. The analyst was modeling for 4 million BB10 units this quarter. Misek has been one of the most vocal BlackBerry bulls on the Street.

On the other end of the spectrum has been Bernstein Research analyst Pierre Ferragu, slapping an underperform rating and $10 price target on BlackBerry. The BlackBerry bear was expecting sales of $3.35 billion and earnings per share of $0.23, believing BB10 units would be just 3 million and older BB7 units would be 4 million.

Well, the company has just posted results that fell dramatically short of even bearish estimates. Total revenue was $3.1 billion, which was up 15% sequentially. Gross margin also fell from 40.1% to 33.9% sequentially.

Investors were expecting the company to post black ink after BlackBerry generated $0.22 per share in adjusted profit last time around. Sadly, it swung to an adjusted loss of $0.13 per share. The company cited Venezuelan foreign currency restrictions as negatively impacting earnings by roughly $0.10 per share.

All eyes on BB10
Total BlackBerry smartphone units shipped came in at 6.8 million, with 100,000 PlayBook tablets shipped. Of the smartphone total, CEO Thorsten Heins said that approximately 40% of these were BB10 devices, or 2.7 million. That was well below how many next-generation devices investors were hoping BlackBerry shipped. 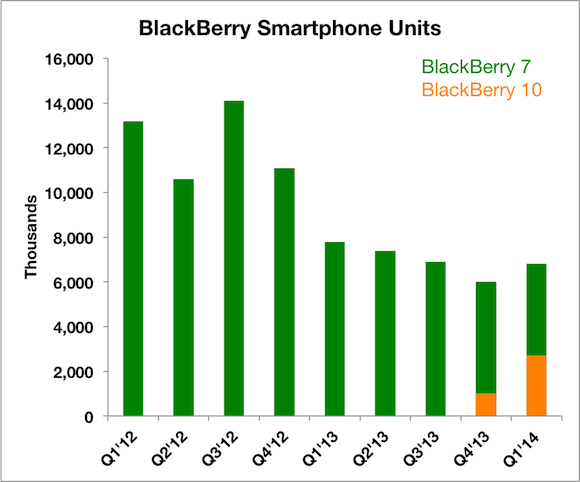 The figure also reinforces the theory that the large purchase order BlackBerry touted for 1 million BB10 units in March was really just a distribution partner or wireless carrier stocking inventory and was no indication of sell-through. 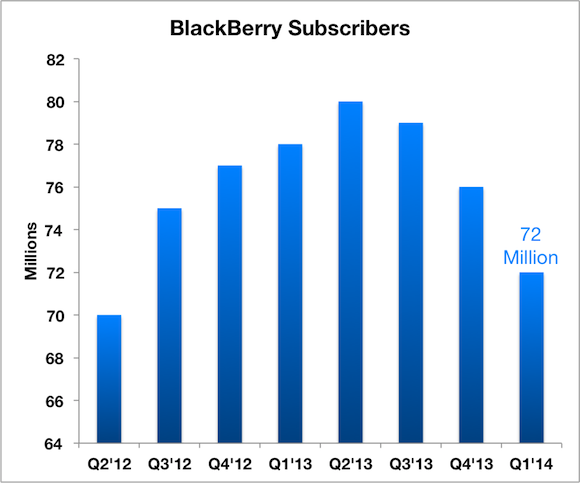 BlackBerry's subscriber base continues to contract, losing 4 million in the quarter to end near 72 million. That's the lowest level of paying subscribers in nearly two years.

BlackBerry backtrack
BlackBerry also made some important announcements that appear to be strategic concessions. First, Heins reversed his stance on bringing BB10 to the company's aging PlayBook tablet, which will no longer get the update previously announced, saying only that the performance didn't meet expectations. That makes sense since the device was originally launched over two years ago and has not received any major hardware updates since. PlayBook shipments were the lowest on record, putting it low on the priority list of getting BB10.

Perhaps more interesting was that BlackBerry said it would release a new phone this year on the older BlackBerry 7 platform, citing continued demand for older models like the Bold 9900. That shows that the company intends to reinforce its position in emerging markets where lower-end BB7 devices sell better.

The challenge there is that the low-end of the market is quickly being taken over by low-cost Google Android and Nokia Asha devices. Meanwhile, the high-end in developed markets is totally dominated by Apple and Samsung.

The gloomy figures will inevitably spark takeover talk again, since shares have plunged by as much as 29% today. That's brought BlackBerry's market cap down to $5.4 billion, meaning its $3.1 billion in cash is now over half of its valuation. BlackBerry may be cheap right now, but it's a classic value trap.