The Baby Boom has transformed America since it came of age. Some of those changes might have condemned the next generation to a harder life.

Pity the baby boomers. No generation seems more widely despised, even among its own members. A quick Google search shows just how common this is -- the search string "baby boomers are" will be auto-completed with "selfish," "evil," and "the problem." Shortening the string to just "boomers are" adds "the worst generation" to your results. Ouch. How did a generation raised on peace and love in the age of Woodstock come to symbolize everything that's wretched and wrong with the world today?

Maybe it has something to do with these trends.

Income inequality has exploded
Baby boomers were part of a generational bulge born immediately after the end of World War II. The leading edge of that bulge began coming of age during the late 1960s, which means boomer power began to rise toward its peak around the time Ronald Reagan became president. The growth of boomer economic and political power that began during the 1980s also happens to coincide with the beginning of a long-running trend toward greater income inequality: 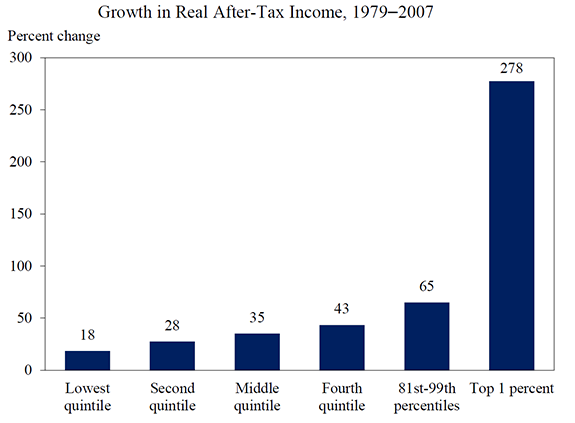 To really drive the point home, let's look at how the top 1% has fared during the era of peak boomer power:

As a result of this widening imbalance, fewer households are earning something close to a median income. The shift in income brackets has pushed more people to the upper and lower bounds of American earners: 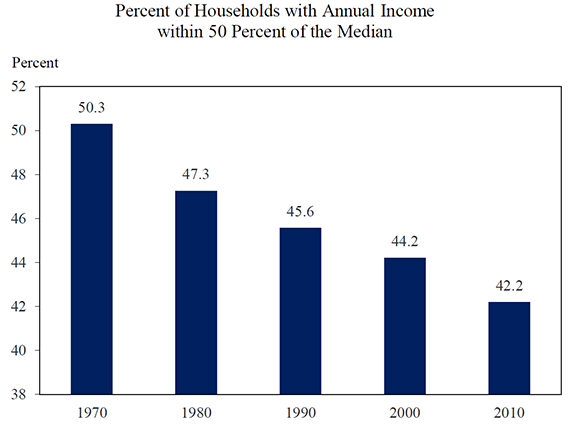 Partly because of this "hollowing out" of the middle class, the median income has been stagnating for more than a decade, which happens to be the period when you might expect the post-boomer Generation X to begin coming into its own peak earning period. When adjusting for inflation, median incomes appear to have returned to levels last reached during the dot-com era, when the boomer generation had its greatest number of peak earners: 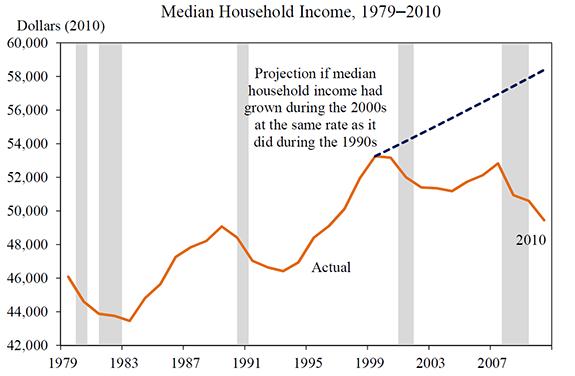 This isn't to say that the entire country is doing worse. In fact, boomer-led households made it through the recession relatively unscathed, and a big reason median incomes have stagnated has to do with the incomes of the peak-earning age bracket. In 1999, that happened to be the leading edge of the boomer generation, who were born between 1946 and 1955. Today, the same age bracket, now made up of the second half of the baby boom, is earning 17% less at the median, in real terms, than the first-wave boomers did in 1999. No wonder even the boomers can't seem to stand their own generation: 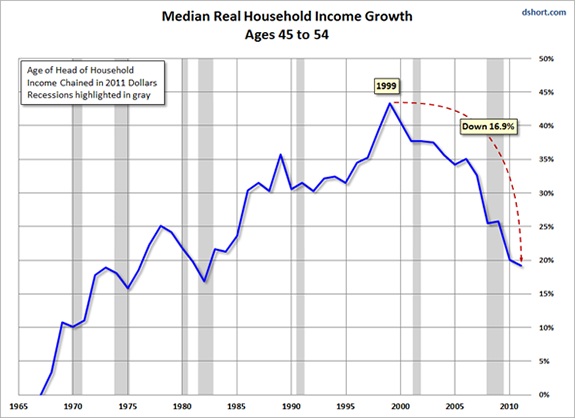 When adjusted for inflation, the median net worth of households led by people aged 45 to 54 was 10% lower in 2009 than it was in 1984, according to the Pew Research Center. Those led by individuals aged 55 to 64 -- currently the leading edge of the boomer generation -- was 10% higher in 2009. On the other hand, households led by people between ages of 35 and 44, which today is the primary age range of Generation X, had 44% less median net worth in 2009 than the first-wave boomers did in 1984. Those younger than 35 had two-thirds less net worth in 2009 than the same age group did in 1984, which means that boomers generally had almost three times as much real wealth (and potentially much more than that, in the case of older boomers) during Reagan's first term in office as their children did at the start of President Obama's first term.

Taking more and leaving less
Those graphs help explain why many people feel resentful toward the boomers, but they don't really offer a compelling reason why the boomers should be so widely reviled. It's not as if there's a wave of workers turning around and knocking down the pay rate of its successors. However, boomers hold plenty of influence in the area of public policy. If you want to understand the national debt, a good place to start would be the 1980s, when boomers started to come into their own: 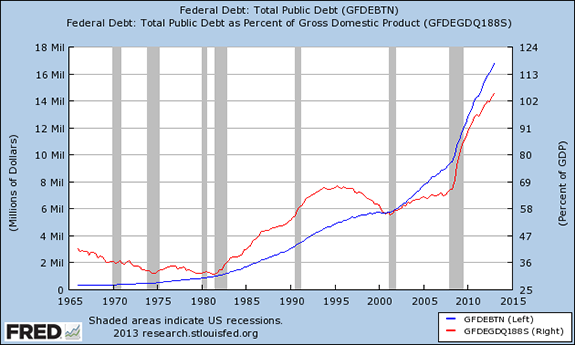 America's debt-to-GDP ratio was actually declining through the 1960s and 1970s, before the Reagan Revolution brought a new attitude to power. This isn't to say that a national debt is inherently evil. Much depends on where that money goes. Debt-to-GDP was higher during World War II -- but all that spending did help win the war, and it also helped build a massive manufacturing infrastructure. In the early postwar years, much government spending went toward "investments," which the think tank Third Way defines as spending on things like "building roads, teaching kids, and curing disease." However, surging demands from entitlement programs have flipped the script, and the United States now spends more than $1 trillion more per year on entitlements than it does on public investments. In 10 years, as more boomers retire and begin to draw on Social Security and Medicare, that gap will grow 150% larger. 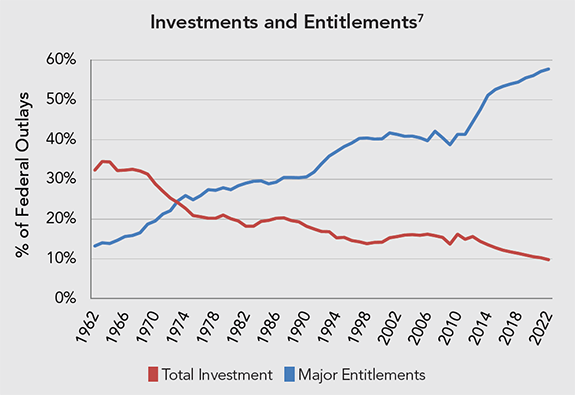 Generation X has another two decades to go before it can start drawing on Social Security. Millennials won't start getting payments until around 2050. Since the Social Security trust fund is only projected to cover full benefits until the early 2030s, It shouldn't be surprising that the younger generations wonder if Social Security will even be around when they retire.

"Dang kids, get a job!"
If you're not familiar with "Old Economy Steve," you might want to take a look. It's probably the one meme that best captures everyone's frustration with the baby boomers, particularly how oblivious they are to the economic realities of the day. One of Old Economy Steve's common refrains is "You need to go to college so you can get a good job," usually paired with the ease of paying back the costs of a degree. However, college degrees haven't actually translated to greater earnings since millennials started graduating. 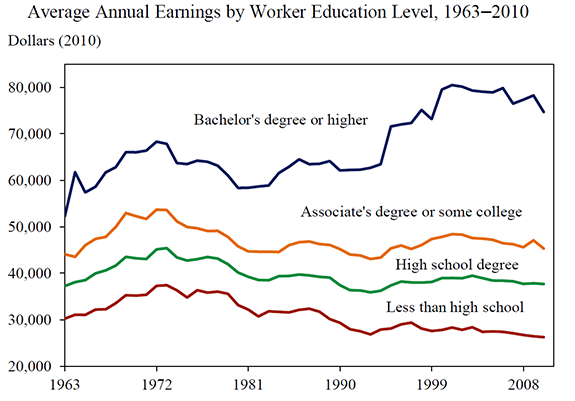 College costs, however, have doubled since the turn of the century and have grown 600% since the boomer wave left college: 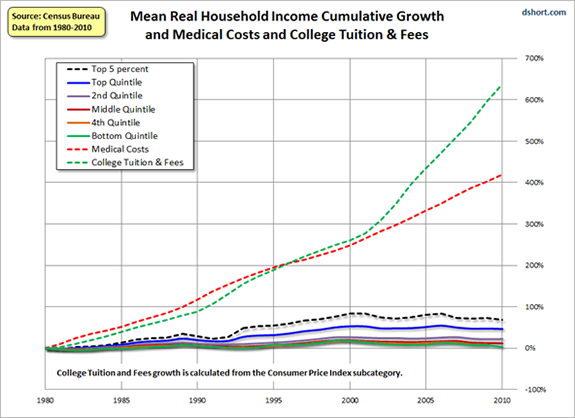 The steady growth in medical costs is also interesting, particularly as boomers begin to retire and draw on Medicare. Everyone else remaining in the workforce has had to deal with higher health costs even as their employers (if they have one) steadily eliminate health insurance benefits: 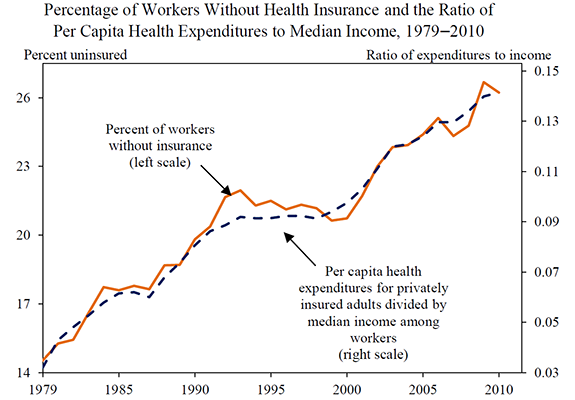 But wait! We have Obamacare now, right? Obamacare is great news for uninsured boomers, but it's kind of a mixed bag for their children. Josh Barro recently wrote that Obamacare "is designed to be a fiscal transfer from the young to the old, the healthy to the sick, and the rich to the poor." Young men will be hit hardest, as their premiums may increase by more than 50%. In California, where Obamacare was implemented earliest, the average premium for the currently uninsured will be $200 to $300. That might not seem like much, except for the fact that the real median income for younger workers has been in decline for more than a decade.

Old Economy Steve also likes to point out how much higher the minimum wage is for today's kids. Well, the minimum wage was at or near inflation-adjusted all-time highs throughout our hypothetical boomer's childhood: 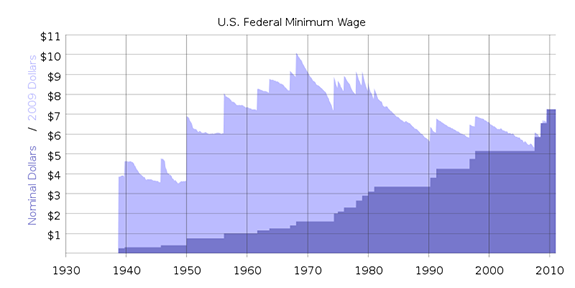 Even though the minimum wage wasn't quite $2 an hour in 1970, Old Economy Steve could have paid for his college tuition by working about 14 hours a week for minimum wage while at school, since the average annual tuition back then was about $1,200. Today, it takes more than twice as much work at minimum wage for the same result.

Let's not forget Old Economy Steve's old-economy investments, either. A young boomer in 1990 (in the 25-35 age bracket) could buy a new house with about four years of the median household wage for his age group. It's roughly the same for today's young millennials, except that the average young college grad (and you almost need to be a college grad now to get a job that pays well enough to buy a house) leaves academia saddled with more than $35,000 in debt -- about 70% of the 25-35 age bracket's annual income, which has not changed in real terms since 1990 -- compared with average college debts of about a tenth the annual household wage in 1990. Few boomers would have even racked up that much, as the last year of boomer babies would have turned 21 in the mid-'80s. And, of course, boomers also enjoyed the longest sustained stock market rally in history: 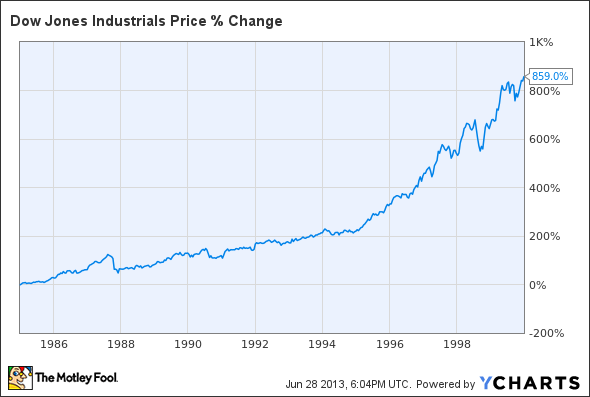 In nominal terms, the Dow Jones Industrial Average (^DJI 0.03%) grew by 14% per year from the start of 1980, when the first boomers hit their peak earning and investing years, to the start of 2000. Even if you adjust for inflation, boomer investors who followed only the simplest indexing strategy earned nearly 10% a year after inflation for two straight decades. How have the next generations done? 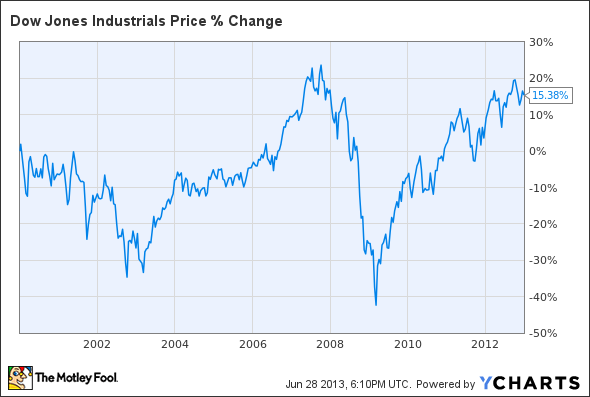 Not quite so well -- the next 13 years produced nominal returns of just 1.3% per year for index investors, and negative real returns when adjusted for inflation. It hasn't been anywhere near as easy for children of the baby boomers to build a nest egg as it was for the boomers themselves.

What do you make of this? Are these charts just trying to blame boomers for trends largely out of their control, or does there appear to be something to the complaints that boomers have taken everything and left nothing for the next generation?