Don't look now, but Iron Man 3 broke the $400 million box-office barrier here in the U.S., making it the year's top grossing film and the fourth biggest comic-book adaptation of all time. 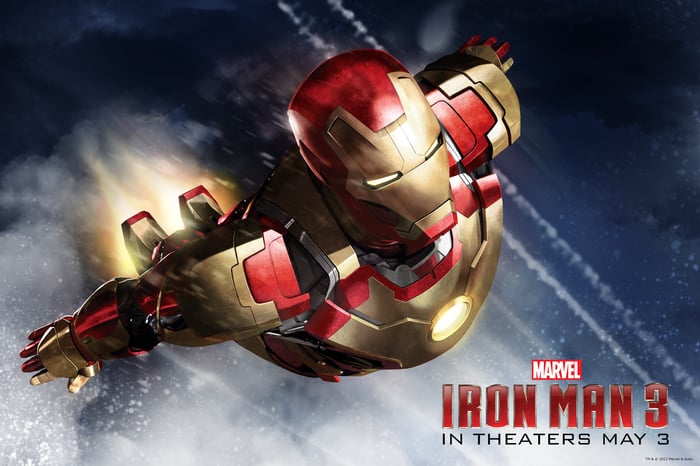 Iron Man 3 has soared at theaters around the globe. Source: Marvel Entertainment.

Can anyone touch Walt Disney's (NYSE:DIS) Marvel Studios? Man of Steel has proved to be a winner for Time Warner's (NYSE:TWX) DC Entertainment and should close the weekend with about $248 million at the U.S. box office, Deadline.com reports. Audiences seem to like director Zack Snyder's grittier, more realistic version of Superman.

All good results, no doubt. But with $1.2 billion already in the can, it's hard to believe anything can top Iron Man 3 at this point -- not even Warner's robots-vs.-aliens mashup, Pacific Rim. I find it more likely that Marvel's Avengers franchise will be the second coming of Star Wars, and propel Disney stock to new highs as a result. Think I'm crazy? Check the numbers:

Pay close attention to the bold text. On a per-film basis and adjusted for inflation, Marvel's Avengers features get within spitting distance of Lucasfilm's Star Wars haul.

To me, that suggests an insatiable demand for Avengers content, and not just at the box office. Fans and investors rejoiced after Disney announced a deal to bring Robert Downey Jr. back for Avengers 2 and 3 as Marvel teases three untitled films for 2016 and 2017. Most expect details at next month's San Diego Comic-Con, which seems likely to draw at least 130,000 fans.

Meanwhile, on the publishing side of the business, Marvel's "Iron Man" title was the 11th-best selling comic book in May, according to data supplied by The Comics Chronicles. Two other Avengers-related titles -- "Age of Ultron" issues 7 and 8 -- cracked the top five.

In TV, social-media analytics firm Crimson Hexagon, in partnership with social-TV site The Lost Remote, found Marvel's Agents of S.H.I.E.L.D. to be the most-talked about new show of the forthcoming fall season. Strong ratings could follow.

So while Star Wars was and still is a classic, the Force is strong with The Avengers right now. Expect Marvel and Disney to cash in, making the stock a buy for those willing to hold through at least 2015, when Avengers 2 makes its debut.

Do you agree? Are you expecting big things on the big screen from Marvel's next Avengers projects? Leave a comment to let us know what you think about the franchise, and whether you'd buy, sell, or short Disney stock at current prices.