Bank of America's stock doubled in value in 2012, but investors who purchased shares of the financial behemoth 10 years ago have seen the value of their principal investment deteriorate almost 70%.

The events that led to these crushing blows for common shareholders are well documented, but a single view of the confluence of these events is staggering. 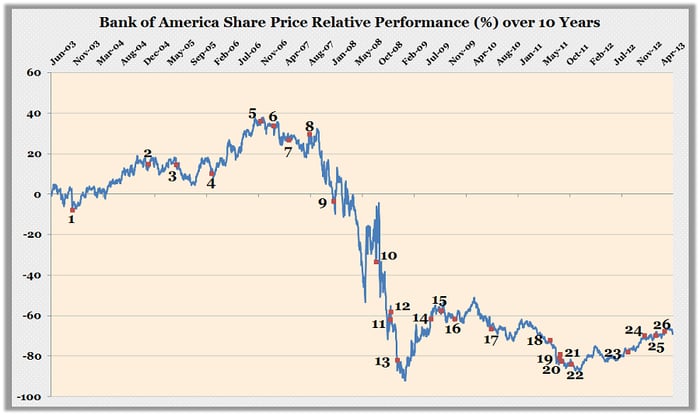 Marked numerically in the preceding graph/timeline, here are 26 events longtime Bank of America shareholders will not soon forget:

1 -- Oct. 27, 2003: B of A agrees to buy FleetBoston Financial for $47 billion. The deal gives the bank a stronger foothold in the Northeast and brings Brian Moynihan, a Fleet Executive VP known for being a shrewd deal-maker, under the B of A umbrella.

5 -- Nov. 6, 2006: B of A acquires U.S. Trust from Charles Schwab for $3.3 billion. The unit ultimately rolls up under Moynihan, head of the bank's wealth-management business.

18 -- June 29, 2011: B of A announces a massive $8.5 billion settlement regarding all legacy Countrywide-issued private-label residential mortgage-backed securities, with Bank of New York Mellon as trustee. This is settlement is currently pending final approval because of some objecting parties, including AIG.

21 -- Sept. 6, 2011: Moynihan puts his stamp on the bank's structure by revamping his management team. He creates two COO positions (David Darnell and Tom Montag) and boots the heads of consumer banking and global wealth and investment management out the door.

24 -- Jan. 7, 2013: B of A settles with Fannie Mae to resolve agency mortgage repurchase claims on loans originated and sold directly to Fannie Mae through the end of 2008.

26 -- May 5, 2013: B of A settles with MBIA to resolve certain past representations and warranties claims.

The past 10 years have certainly been a whirlwind for the bank that Carolinas-native Hugh McColl grew into a global powerhouse. While the series of massive acquisitions ultimately crushed shareholders, the actions highlight the strength B of A possessed less than a decade ago. If B of A can return to a even fraction of that strength, shareholders could continue to recoup some of their paper losses.

Now at the helm for three and half years, the time has come for Brian Moynihan to show investors, employees, and clients that he is the man to led those gains. Based on his involvement in the events I've highlighted, it's clear he has vast operational experience in most of B of A's segments -- now, he just needs to operate.