No two ways about it: Yum! Brands (NYSE:YUM) stock has disappointed investors mightily this past year. The owner of perhaps the world's best-known pizza brand -- Pizza Hut -- Yum! shares have gained barely 8% in value this year.

That's less than half the rise of the broader S&P 500 index of companies. It's four times less than the 37% gain seen at Papa John's (NASDAQ:PZZA), and less than a tenth of the gains at skyrocketing Domino's Pizza (NYSE:DPZ). But why is Pizza Hut's owner underperforming, and why might its laggard performance continue for longer than investors expect?

According to analysts who track the prospects of these businesses, Yum! Brands -- the owner of not only Pizza Hut but also KFC and Taco Bell -- has the worst prospects to grow its businesses over the next five years of any of the three pizza chains named so far. ...and it's been growing slowly for quite some time
Worse, this is no recent phenomenon, or easily reversed. It's the continuation of a trend of substandard profits growth at Yum! that's gone on for quite some time. Despite being diversified across three separate kinds of fare, Yum!'s performed poorly for five years straight, relative to its pizza-prepping peers: ...but really isn't
And yet, closer examination of the "profits" that contribute to Yum!'s relatively low P/E ratio suggest the company's not really doing as well as it looks.

Indeed, if you evaluate Yum! on the amount of cash it produces divided by its market cap (a concept stock investors call the "free cash flow yield"), the company actually only places in the middle of the pack... and toward the bottom. Yum!'s free cash flow yield trails that of industry leader Domino's by a good 183 basis points (36%), yet sports only a 60 basis-point advantage over Papa John's. 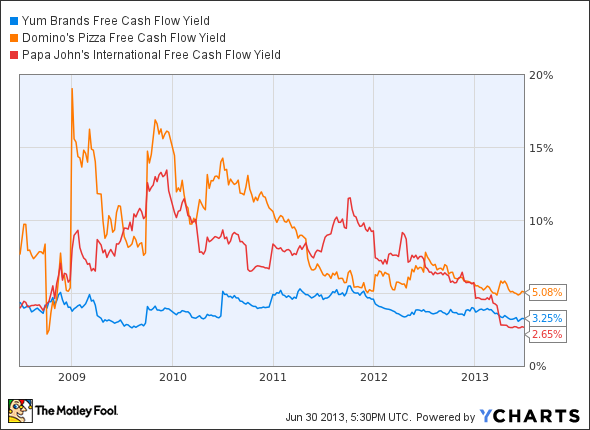 Foolish takeaway
Weaker-than-average growth prospects, combined with a long-term record of undergrowing the competition, suggests the apparent bargain in Yum! Brands stock isn't all it's baked up to be. Opinions may differ on the quality of its pizza pies. But strip away the layer of cheese covering up its cash flow, and Pizza Hut just isn't as good a business as meets the eye.