Mr. Market left big-box electronics retailer Best Buy (NYSE:BBY) for dead in late 2012. Even in the darkest days of the Great Recession, Best Buy stock bottomed out around $20, but last December, the stock fell to a low of $11.20 -- less than 5 times adjusted earnings. 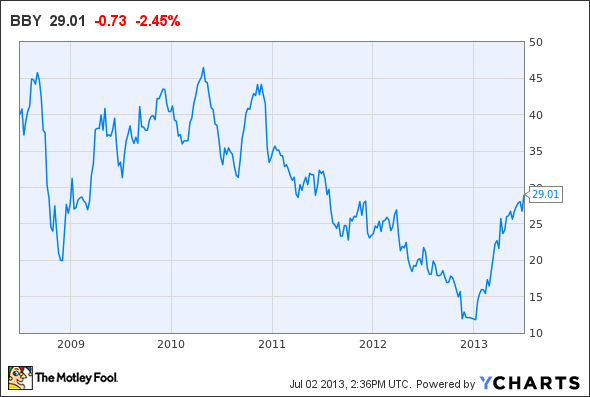 The initial market reaction to the company's "Renew Blue" turnaround plan -- announced late last year -- was lukewarm. Many investors felt that the company could not fend off competition from Amazon.com (NASDAQ:AMZN) in the long run. However, in the past six months, the stock has enjoyed a renaissance as investors have started to buy into CEO Hubert Joly's vision.

That said, Best Buy stock's recent run-up seems unsustainable. After hitting a new 52-week high on Monday just below $30, the company trades for more than 12 times expected 2014 earnings. That represents a significant premium to Apple (NASDAQ:AAPL), which trades for less than 10 times expected 2014 earnings, has a better balance sheet than Best Buy, and offers a higher dividend yield. This situation implies that investors believe Best Buy has significantly better growth prospects than Apple, which seems like a dubious proposition indeed. Best Buy stock is likely to drop significantly when investors discover that the company still has a long way to go in its turnaround.

Earnings still on the decline
Last quarter, Best Buy reported a 1.3% decline in comparable store sales. That performance was weighed down by a calendar shift that moved the pre-Super Bowl TV sales rush to Q4, as well as fewer major product launches. For example, the first Retina-screen iPad launched in March 2012, but there were no Apple product launches in the same period this year. On the other hand, Best Buy's new price-matching policy probably helped sales.

Nevertheless, the net effect was a significant decline in profitability. Adjusted EPS plummeted from $0.76 to $0.32, as Best Buy's operating margin dropped from 3.9% to 2%. The operating margin decrease was caused primarily by a decline in domestic gross margin 25.3% to 23.4%. Best Buy's attempts to compete on price with Amazon and other electronics retailers constituted the biggest drag on gross margin.

Best Buy's Q1 performance was symptomatic of the general problems it faces. It can certainly boost sales by becoming more competitive on price, but in doing so it will have to accept lower gross margins. With competitors such as Amazon and Costco content to survive on razor-thin margins, it seems naive to expect Best Buy to return to the "glory days" of 2007 and earlier, when the company's annual operating margin eclipsed 5%.  With margins tightening, future profit growth will be modest at best.

These new initiatives will help Best Buy differentiate itself from the competition and will be a better use of floor space than the CD and DVD racks that will be removed. In a best-case scenario, they will drive customers looking for good service to Best Buy stores, while reducing the company's reliance on low-margin Apple products. On the other hand, Microsoft and Samsung don't have the brand cachet of Apple in the United States. If the legions of Apple fans in the U.S. come to see Best Buy as the "Samsung store" or the "Microsoft store," it could offset much of the benefit of having these shops.

Foolish bottom line
Best Buy bulls believe that the company's investments in competitive pricing and technology -- and its partnerships with Samsung and Microsoft -- will get sales growing again. Furthermore, they expect the company's cost cuts to boost margins. In fact, some analysts believe that Best Buy could achieve EPS of $5 several years down the road, which would support a much higher stock price.

That upside scenario, while not impossible, seems far-fetched. Best Buy hasn't yet halted its streak of earnings declines, and fierce competition will continue to pressure margins going forward. As a result, Best Buy stock looks primed for a big correction. I wouldn't consider investing in this company until it has demonstrated tangible signs of a turnaround, in the form of a return to earnings growth.