The Department of Labor reported that the U.S. economy added 195,000 jobs in June. Analysts had expected the economy to add just 155,000 jobs. The government also revised the jobs numbers for April and May upward to 199,000 and 195,000, respectively. However, the expectation-beating jobs numbers were not enough to move the unemployment rate down, as more people entered the workforce. The unemployment rate only includes those who are actively looking for work; many long-term unemployed people stop looking for work and are therefore not included in the official unemployment rate. Americans are gradually re-entering the labor market as the economy improves, which is good for the economy though it keeps the official unemployment rate high.

This good news is also potentially bad news for assets prices, which are being propped up by the Federal Reserve's $85 billion-per-month asset purchases each. Bonds reacted negatively to the news, with the yield on the 10-year Treasury rising by 0.2% to 2.7%. The chart below is only updated weekly, but you can see the massive fall in bonds over the past two months as investors have begun to worry about the Fed's tapering of asset purchases (yields and bond prices move inversely). 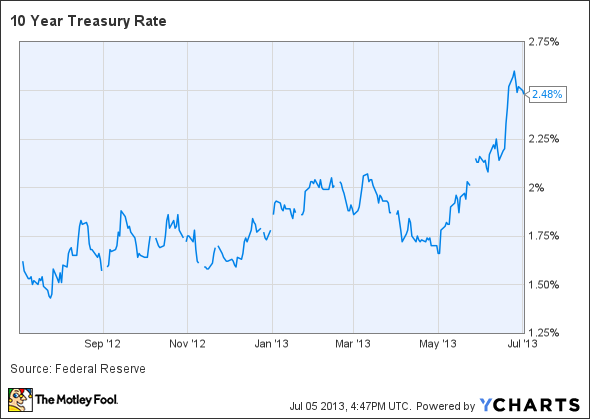 While the bond market is down, the stock market is rising. Financials are leading the Dow today, with JPMorgan Chase, Bank of America, and American Express all up more than 1% for the day. Financials benefit from higher rates, as they can make more money on the spread between their deposits and the loans they give. Over the short term, some banks will be hurt by having to market the bonds held on their balance sheets, but over the medium term banks stand to benefit greatly from higher rates.

Outside of financials, Hewlett-Packard (NYSE:HPQ) is up 1.6%. Tech stocks as a whole are up, taking the Nasdaq Composite 0.57% higher. HP's competitor Dell has seen its stock price fall below the price that founder Michael Dell and Silver Lake Partners have offered to take the company private. The low price perhaps means investors do not believe the buyout will go through. Over the long run, Dell's loss is HP's gain: HP is trying to turn itself around, and a competitor's travails allow HP's salespeople to tout HP's relative stability.