With half of 2013 in the record books the automotive industry has just put away its best month of the year and sales look to continue upward. Ford (NYSE:F), General Motors (NYSE:GM), and Chrysler have rebounded from their darkest chapter in history, and for the first time in two decades all three gained market share for the first half of 2013.

Although people may disagree about the route GM and Chrysler took by wiping out billions of dollars in debt through a government bailout – and I certainly have my issues with it – it is hard to disagree that all three are producing competitive vehicles in segments they were once left for dead in. Ford is doing especially well; it's narrowing the sales lead GM has held for years, and here's how the numbers look.

With Ford's increase being much higher than its largest competitors, we can expect its market share to take the biggest jump as well:

Information from the Wall Street Journal.

The change may not seem like a big jump, but it is. Each fraction of a percentage point is a big deal, and Ford's gain in U.S. market share was the best of any automaker. The question is: Will Ford gain enough market share to replace GM as the best-selling automaker in the U.S.?

I believe that Ford will, and it will largely be decided over the next two years. June's seasonally adjusted annual rate, or SAAR, came in just under 16 million – the highest rate in over five years. The rising tide will raise all boats, but Ford will capitalize more than its rival because GM still owns the oldest vehicle portfolio in the industry.

While Ford was designing and launching hugely popular vehicles, such as the Fusion and the Escape, GM was still wrangling with its financial fallout and government bailout. While GM's best-selling Silverado aged far beyond its expected lifespan, Ford's F-150 continues to increase its sales lead and the company is anticipating its 2015 redesigned F-150 to be a big hit.

As most of you know, Ford's F-150 has been the best-selling truck for 31 years and the overall best-selling vehicle for 36 – and that will continue for the foreseeable future. In addition to the F-150's success, these three vehicles should help Ford race past GM in the next couple years: 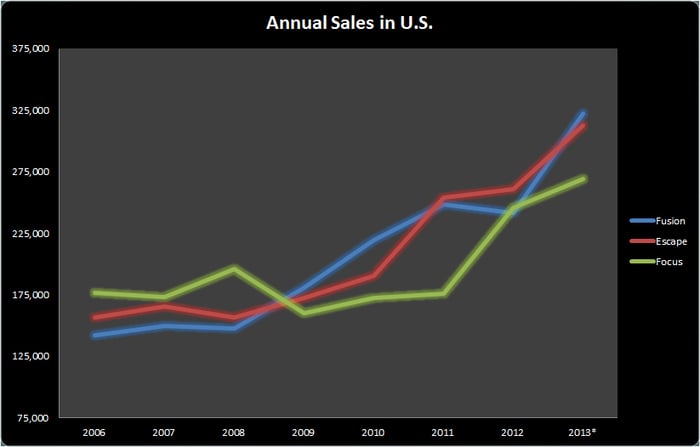 Bottom line
Ford is years ahead of GM in certain aspects, including operating efficiency and bottom-line profits. All of Ford's new vehicles have been a hit where GM has stumbled with its redesigned Malibu. GM just started its all-important advertising blitz for its redesigned 2014 Silverado and that will be a big factor if GM wants to hold on to its sales crown. GM surely isn't going to give up the sales lead without a fight and plans to redesign, refresh, or replace almost 90% of its vehicles by 2016 – but I still expect Ford to come out ahead.