Last month, in the wake of the Fed's June rate-setting committee meeting, I announced that the liquidity rally had died. Three weeks on, and it now appears that my report of its death was an exaggeration. Consider the following:

All it took to achieve these new index highs were the following 11 words from Fed Chairman Ben Bernanke, uttered yesterday in response to a question following a speech in Cambridge, MA: "Highly accommodative monetary policy for the foreseeable future is what's needed."

Alright then, if the liquidity rally in equities is still on, has the notion of a "tapering" in the Fed's bond purchases had any broader, lasting impact on financial markets? The answer is yes. Just look at "safe haven" assets, such as Treasury bonds and gold. Sure, they've rebounded somewhat over the last couple of weeks, but they're still below where they stood on May 21. Look, for example, at the graph comparing the SPDR Gold Shares (NYSEMKT:GLD), the largest gold ETF, to the S&P 500: 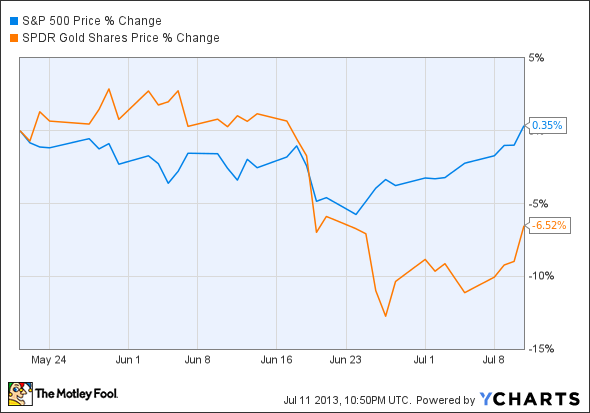 As mentioned above, the S&P 500 has just made a new high; meanwhile, using the ETF as a proxy, gold is still down 6.5%, which exceeds stocks' maximum loss during this period. Investors' bout of "taper anxiety" may have been just a hiccup on the new road to new equity market highs, but for gold and bonds, the condition looks rather more serious. Talk of the taper was enough to break the spell that had investors believing they could no wrong by putting money into these assets. It's too early to do a postmortem, but I stand by my preliminary conclusions: The bull market in gold and bonds is dead.

Get Set, the Liquidity Rally Is Back On! @themotleyfool #stocks $^GSPC $^VIX $GLD $^DJI Next Article
Current